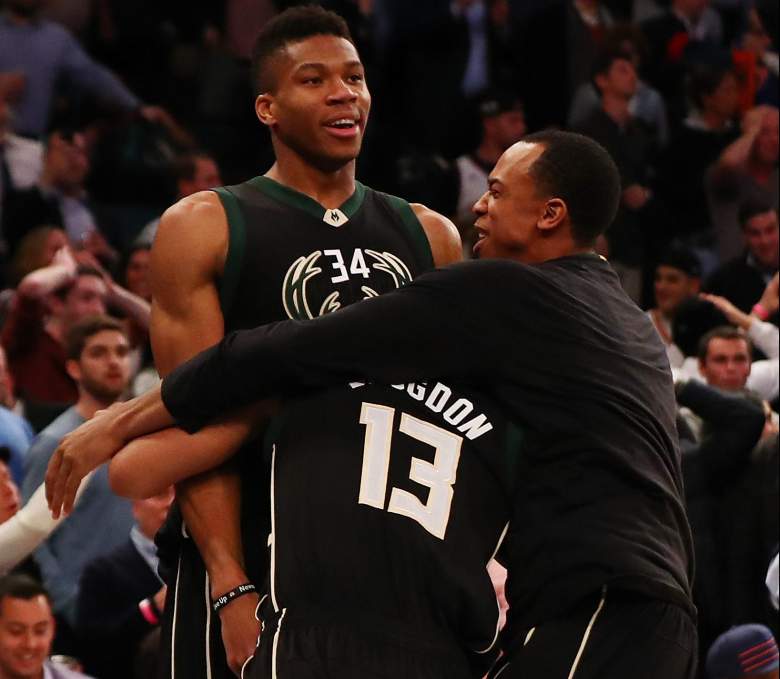 Giannis “The Greek Freak” Antetokounmpo has been getting things done for the Milwaukee Bucks this season. On January 4, he hit a buzzer-beating shot against the NY Knicks to win the game to reach the climax of his short career.

Hopes and chances are high for the Greek Freak to be selected to his first-ever NBA All-Star game.

Here’s all you need to know about the Greek Freak:

1. Giannis Hit a Buzzer-Beating Shot Against the Knicks

The same week Antetokounmpo appeared on the cover of Sports Illustrated, he drained a fadeaway shot to beat the buzzer and give the Bucks a 105-104 victory against the New York Knicks. It was the first time he’s hit a buzzer-beating, game-winning shot in his career. But given his rise to stardom, there figures to be a few more to come.

The clutch shot gave Giannis 27 points to go along with his 13 rebounds, four assists and three blocks for the game. The performance has become the norm for 6-foot-11 guard — that’s right, coach Jason Kidd likes to play him as a versatile guard. And it’s worked.

He has excelled leading the fast break and the Bucks’ offense since it was changed to his primary position last spring. His frame and unique style has given him a huge advantage in the front court, as evidence by this ridiculous fastbreak dunk during the game:

The throwdown was just one of many highlight-reel plays he has made throughout his short career in Milwaukee. The humbleness of the Greek Freak has made him a very likable player for Bucks fans and many fans across the nation — and world.

Giannis has to be the most humble player in the NBA. Never taking credit for his greatness and always putting his teammates first. #respect

Anybody catch the postgame interview on TNT where Giannis first thanked his teammates and then wrapped up the interview by saying thank you?

After the victory against the Knicks, humbleness showed in post-game interviews with reporters at Madison Square Garden.

Giannis was asked about taking the air out of Madison Square Garden with his first buzzer beater ever. Greek Freak was like, "what???" LOL pic.twitter.com/eo8BCjEPRz

And he also showed his skill at brushing off any awkwardness that may occur in social interactions. 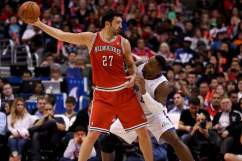 2. The Greek Freak Turned 22 In December

Join us in wishing @giannis_an34 of the @bucks a HAPPY 22nd BIRTHDAY! #NBABDAY

Although he seems to be playing like a veteran, Giannis just turned 22-years old in early December. If he went to college and stayed all four years, he would just now be in the middle of his senior season.

Things have progressed every season since he entered his first NBA season when he was just 19. His birthday is December 6, 1994. 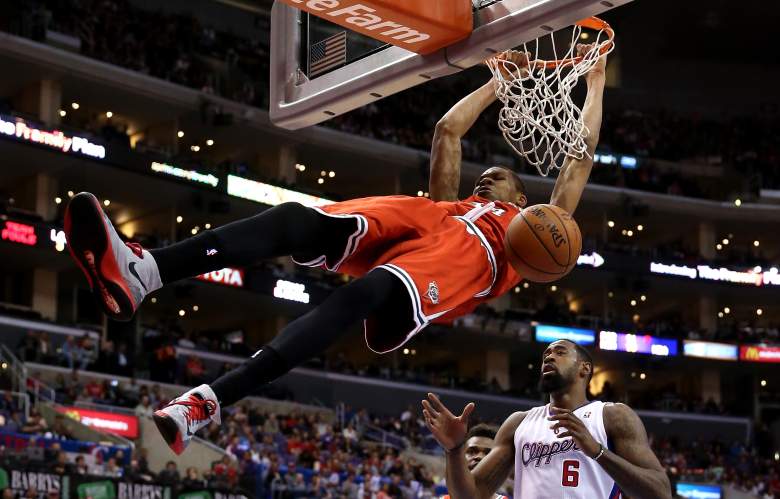 Giannis Antetokounmpo dunks the ball in a game during his rookie season in 2013. (Getty)

His stats have improved every single season and are among the league’s best. When Giannis entered the league, his body was still growing and he was still filling out his unique frame. In just one season, Giannis grew over 2 inches, according to the Bucks General Manager John Hammond.

When we first drafted Giannis, we measured him at 6-foot-8 1/2 … (midseason when a Bucks strength coach walked into his office) he told me, ‘The kid is still growing and I don’t think he’s done.

By the end of his rookie campaign, Giannis stood the 6-foot-11 he is currently listed at. 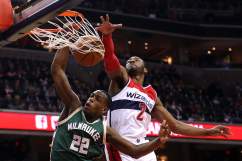 3. Antetokounmpo Leads the Bucks in Every Major Stat Category

This is why @Giannis_An34 is an all star. Leads team in every category. Leads NBA in impossible plays, and also he is Greek. #NBAVOTE pic.twitter.com/Ow9d2KLffK

If the case for Antetokounmpo to make the 2016-17 NBA All-Star Game was in doubt, the stats that he has put up this year should do a lot in swaying voters.

The cast that Giannis is surrounded by on the Bucks roster has helped get them victories if he doesn’t have a typical game, but there’s no denying that he’s been doing it all for Milwaukee this season.

4. Giannis Was Drafted in 2012 by Milwaukee out of Greece

Giannis was selected number 15 overall in the 2013 NBA Draft by the Bucks. He was just 18-years old at the time.

Fast forward three years, and Antetokounmpo looks like the steal of the draft for Milwaukee and GM John Hammond.

Hammond saw loads of potential in Giannis, but realized that he had to let him develop rather than throwing him straight into the fire. Hammond said shortly after the draft in an interview with ESPN:

We want to expose (Giannis) but not overexpose him. Anytime that Larry Drew can find a way to get him on the floor, sneak in minutes for him, get him out there but not put him in too uncomfortable a position early on. But we’ll see how things go in training camp, how things go in exhibition season, really see what he’s capable of doing … when you’re watching (Giannis) do some of these things on the floor, whether it be with the ball or without the ball, or with his athleticism and length, it comes back to (he’s) 18-years old.

Giannis was selected 14-picks after Anthony Bennett and was passed over for Cody Zeller, among many other players who have struggled in their transition to the NBA. 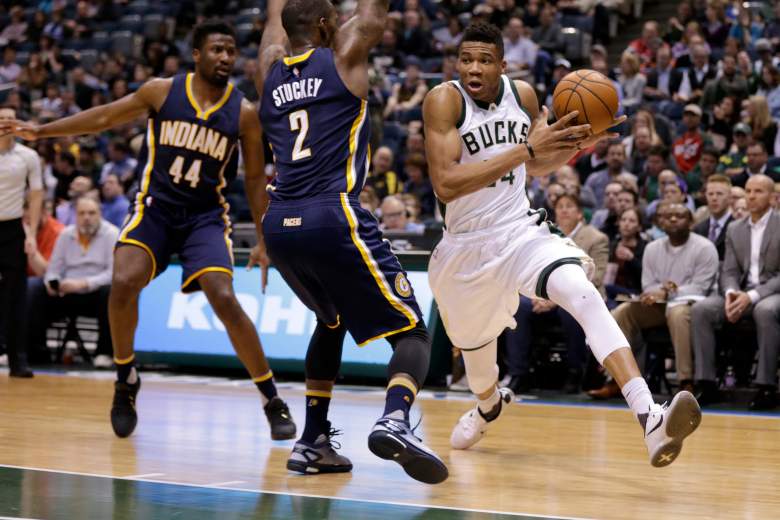 The Bucks may have lucked out by inking the Greek Freak to a four-year, $100 million contract prior to the 2016-17 season. With the salary cap continuing to rise to numbers not seen before, Milwaukee got a good deal by keeping him around for the future. He won’t enter restricted free agency as part of the deal, as there are no player or team options as part of his contract.

It was a long-term commitment for the Bucks, but one the franchise looks like a genius for making. And for Bucks fans, it must feel good.

The team has come a long way from the days when Gary Payton moaned about being traded from his beloved Seattle. Or when Stephen Jackson seemed to despise suiting up in a Bucks jersey.

In fact, the Greek Freak has been vocal about his desire to bring a championship to Milwaukee and have his jersey hung from the rafters next to legends like Kareem Abdul-Jabbar and Oscar Robertson.

In an interview with EuroHoops.net, Giannis said:

Given the rise of Antetokounmpo in the 2016-17 season and the struggles of the Bucks franchise since the early 2000s, the future sure looks bright. 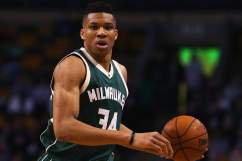