Karen Fairchild, Kimberly Schlapman, Jimi Westbrook and Phillip Sweet make up the group that was founded in 1998.

Little Big Town are pros when it comes to anthem performances. According to The Spun, they performed before the 2016 NFC Championship and prior to Game 4 of the 2014 World Series. The performance is expected to happen about 8 p.m. Eastern before the game kicks off.

According to The Boot, the group is set to release their eighth album in February 24, 2017. The album is called The Breaker. Fairchild explained the meaning of the name to The Boot.

“The record is called The Breaker for multiple reasons. I think there’s lots of ways that you get broken. I think there are some times you are the breaker. Sometimes it’s like looking ahead at the future and what’s on the horizon, breaking. Just so many ways it ties into the record, and for us as a band,” Fairchild told The Boot.

Little Big Town has ties to some of the industry’s best artists. Their new album’s first single “Better Man” was written by Taylor Swift. The group’s last album, Wanderlust, was produced by Pharrell.

Here’s a look at their performance before the Cardinals-Panthers NFC Championship in 2016: 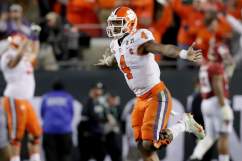