Before the halftime aired during tonight’s game, Tiffany & Co. released their 60-second Super Bowl commercial, starring none other than Lady Gaga.

Tonight marks the first time in 20 years that Tiffany’s has aired a commercial during the Super Bowl. The spot launched the company’s “Legendary Style” campaign and their HardWear collection. In the ad, Gaga talks about the need for creativity– especially fitting considering tat Tiffany has designed and produced the Super Bowl winners’ trophy since 1967.

The creative director for the commercial is Grace Coddington– a former model, and according to a 2016 article in The Guardian, an artist who “has produced some of fashion’s most memorable imagery.” The article also states, “Her pictures might be jolly and decadent or moody and mysterious, but they always tell a story – and a sweeping, vivid yarn at that.” The full-length ad that airs tonight will run 60 seconds, and will involve Gaga discussing what it means to challenge the status quo. In a preview, New York Magazine reports Gaga as saying, “I love to change. It’s pretentious to talk about how creative you are; I don’t feel that way at all. I think it’s empowering and important, and I’m coming for you.” NY Mag has revealed that Tiffany’s HardWear collection will be available for preorder after the commercial airs tonight, but it won’t arrive in store until April 28. 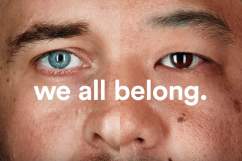