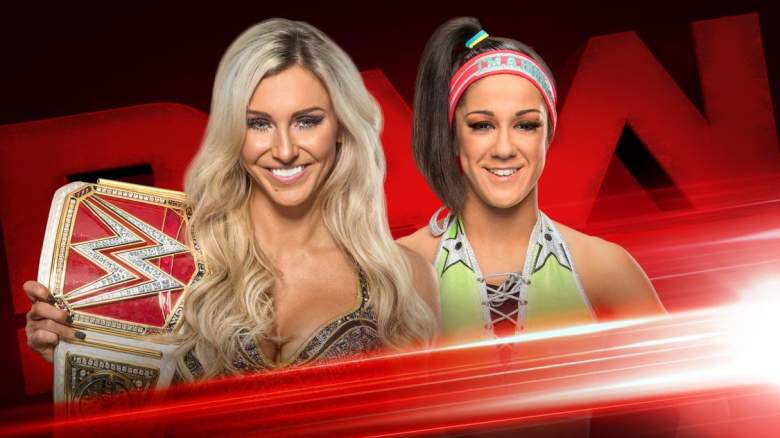 A new episode of Monday Night Raw is currently being broadcast on the USA Network. Here’s everything that has happened so far:

10:49 – Bayley defeats Charlotte and becomes Raw Women’s Champion. She’s able to score the victory after Sasha Banks interferes and attacks Charlotte. Banks had run out to the ring because Dana Brooke had been attempting to interfere and help Charlotte.

9:57 – Chris Jericho kicks off the “festival of friendship.” Pyrotechnics go off and Chris Jericho dances out to the ring, wearing a bright silver jacket and hat. Kevin Owens follows after Jericho, but he looks super bummed, and there’s clearly something on his mind.

The two of them enter the ring, which is covered in red carpet. From underneath a curtain, Jericho unveils a piece of modern art he had commissioned that he says represents their friendship. Owens isn’t impressed. Jericho then lifts up another curtain to unveil a second piece of art: it’s The Creation of Adam, except with Owens in place of God and Jericho in place of Adam. Jericho says he calls it The Creation of Kevin.

Jericho then brings out a magician named Friendship, who performs a trick in which he makes a flower appear out of nowhere. Owens says that his nine year old son can do the same trick. Jericho adds Friendship to the List of Jericho and tells him to beat it.

But Jericho says he has one final gift for Owens: he’s going to make sure that Goldberg doesn’t make it to Fastlane. Jericho calls Goldberg out and tells him to come down to the ring.

Goldberg’s theme plays…but instead of Goldberg, “Gillberg” walks out. Owens beats up Gillberg and then grabs the mic. He’s really upset with Jericho for setting this whole thing up. Jericho says that he thought the Gillberg bit would be pretty funny, but he says that he really wanted to just show how much Owens means to him as a friend. He adds that Owens will definitely beat Goldberg at Fastlane because Jericho will have his back.

Owens gives Jericho a hug, though he doesn’t seem to enthusiastic about it. Owens says that he got something for Jericho too, but it’s nothing compared to what Jericho did. Jericho opens the present: it’s a new list! But it’s revealed that the list is actually The List of Kevin Owens, and Chris Jericho is the first name on the list.

Suddenly, Kevin Owens starts attacking Chris Jericho, beating him with a chair, driving him into the barricade, and delivering a powerbomb into the apron. Owens leaves as the crowd boos and as a betrayed and injured Chris Jericho lies in the ring.

9:37 – In a post-match interview, Sami Zayn says that it really sucked losing against Chris Jericho recently, but tonight was a step in the right direction. He also replies to Samoa Joe’s comment in his interview earlier tonight that he is no Sami Zayn; Zayn agrees that Joe is nothing like him, because Zayn doesn’t go around doing Triple H’s dirty work.

Suddenly, Samoa Joe’s theme song comes on. Zayn is waiting around for Joe to enter when Joe suddenly ambushes him from behind. Joe stands over an injured Sami Zayn victorious. “You say my name, you put respect on it,” Joe shouts at him.

9:15 – In an interview with Michael Cole, Samoa Joe says he came to the WWE to hurt people, and the only person whose opinion he really cares about is Triple H. He says that it doesn’t matter who is put in front of him; he will destroy them. He adds that because of him, Seth Rollins will miss WrestleMania for the second year in a row, and even if Seth Rollins comes back before then, Joe says he’ll put him right back on the shelf.

9:12 – Backstage, Cesaro and Sheamus are helping Bayley prepare for her match. Enzo Amore and Big Cass enter, and Sheamus is really angry with them for costing him and Cesaro the Tag Team Championship last week. Enzo suggests that they do something about it.

9:03 – At the end of Strowman’s match, Roman Reigns enters and attacks Strowman. But Strowman counters with a powerslam and leaves as Roman lies injured in the ring.

8:51 – Backstage, Chris Jericho and Kevin Owens prepare for the “festival of friendship.” They’re interrupted by Triple H, who asks to speak to Kevin Owens alone.

8:49 – Backstage, Bayley says that tonight is her second opportunity to achieve her dream and she’s going to hit the jackpot.

8:30 – Backstage, Neville confronts Jack Gallagher, telling him that he’s just a boy and he’s out of his depth. Gallagher calls Neville a pillock.

8:24 – The New Day enter. They mock Bo Dallas, who is standing in the ring ready for a match with Kofi Kingston. Big E holds up a folder marked “Ice Cream Blueprints,” and they explain that they’re planning a New Day ice cream machine.

8:00 – Stephanie McMahon enters. She says that she has given Mick Foley the week off because of how he handled himself during Samoa Joe’s contract signing.

Roman Reigns enters. She tells Stephanie that he doesn’t want to wait until Fastlane; he wants Braun Strowman right now. She asks the crowd if they want to see that match, and they chant “yes!” But she ignores them and says that a match against Braun Strowman tonight would put Roman in harm’s way. Instead, Strowman will be facing off against Mark Henry tonight, Stephanie says. Roman says he’ll watch the match live, and Stephanie says that Roman will be punished if he interferes.

Luke Gallows and Karl Anderson enter. They tell Roman to stop disrespecting Stephanie and get used to the fact that he can’t always get what he wants. Gallows and Anderson say that they should go two-on-one against Roman Reigns. Stephanie agrees and books the match.

Roman leaves the ring and starts attacking Gallows and Anderson.