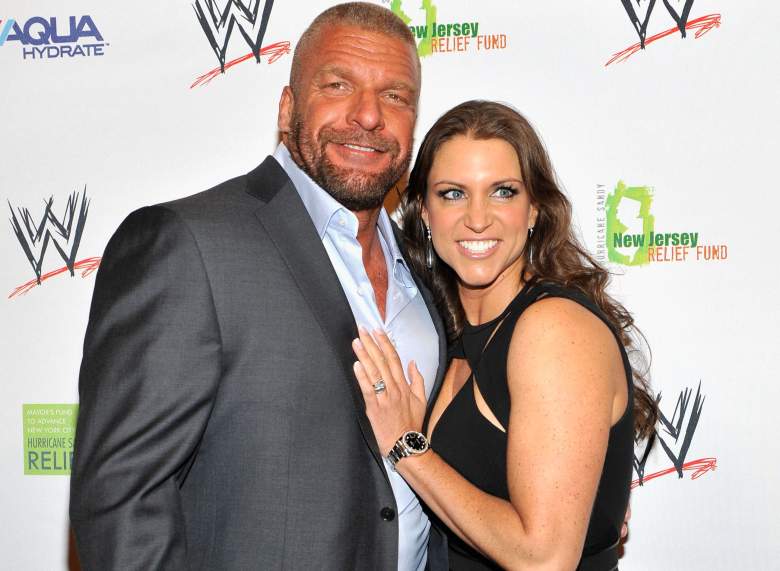 World Wrestling Entertainment’s Triple H and Stephanie McMahon are in a relationship both in front of and behind the cameras.

The two met through the WWE, and they have now been married for 14 years. Although some WWE romances are mainly kept private, this one is frequently brought up during promos, with Stephanie McMahon often being accused of abusing her power to help Triple H on Monday Night Raw, especially by Seth Rollins.

So what’s the real life story behind this relationship? When did it begin? Here’s everything we know.

1. Before They Began Dating, They Were ‘Married’ on ‘Raw’

Before Triple H and Stephanie McMahon legitimately started a relationship, they were engaged in an on-screen romance on Raw.

Like most WWE content from that era, the storyline here was quite ridiculous. Within the show, Stephanie McMahon began a relationship with wrestler Test, which lead to their kayfabe engagement. A wedding ceremony was held in the ring, but just as the priest asked if anyone had any objections, Triple H showed up and revealed that he had kidnapped and drugged Stephanie and taken her to Las Vegas, where they were married.

In a double-twist, however, it was later revealed that Stephanie was in on this the whole time and that she consented to the Triple H wedding after all. She did this in part to get back at Vince McMahon, who earlier had arranged for The Undertaker to kidnap Stephanie. Yes, Stephanie got kidnapped a lot back then.

It was in this relationship with Triple H that Stephanie turned heel, and her character became closer to what it is today.

Around the same time that Stephanie McMahon and Triple H got married on screen, a real-world romance began to heat up behind the scenes.

We still don’t know too many details about exactly how and when their relationship got started, but it began sometime in 2000 or 2001.

Stephanie McMahon has said that her father went back and forth on whether to allow the two of them to date.

“It was not always just all roses. We were given permission and then it was taken away,” she told The Huffington Post. “In terms of the reasons why, I don’t know if he was getting pressure. It was a really big thing in our business for the top star to be dating the boss’ daughter and all of the implications it could have.”

Stephanie did say, however, that Vince has always loved Triple H, so it wasn’t that difficult to get him to get on board with the relationship. She also said that Triple H really had to risk his career for her.

“But when you think about what it took for my husband to put his career on the line,” she said. “What if things didn’t go well? … If it didn’t work out, what would that mean for him?”

3. Triple H Previously Dated Chyna, Who Claims That He Cheated on Her

As Triple H’s storyline with Stephanie McMahon got started, he was in a real-life relationship with WWF wrestler Chyna.

In 2000, the relationship between Triple H and Chyna began to fall apart. According to Bleacher Report, Triple H reportedly wanted to have children, while Chyna did not. At some point within the next few years, Triple H’s relationship with Stephanie McMahon began.

“After he left one day, he left the Haliburton brief case that I gave him in the house,” Chyna told Wrestling Inc in 2012. “Now, I’m not one to be snooping but something just didn’t feel right. I opened it up and found a love letter that Stephanie wrote to him a year earlier saying that she was in love with him. I called Vince up and told him what I found out. He just replied that the jig was up.”

Triple H has maintained, however, that he did not begin dating Stephanie McMahon until after he ended his reationship with Chyna.

Chyna died of an accidental drug overdose in 2016 at the age of 46.

Not long after Stephanie McMahon and Triple H began dating behind-the-scenes, they broke up in front of the camera.

In February 2002, Stephanie and Triple H had their on-screen marriage annulled. Within the storyline, this split happened because Stephanie McMahon had lied to Triple H about being pregnant.

It wasn’t until six years later, in 2009, when it was actually acknowledged on WWE programming that Triple H and Stephanie McMahon were married in real life. Now, this is mentioned very frequently on Monday Night Raw and is a key part of Stephanie McMahon’s character.

5. They Have Three Children Together

The reason for Triple H’s split with Chyna was reportedly because Triple H wanted children while she didn’t. Triple H would end up getting to have children, as he and Stephanie McMahon have three kids.

Recently, Triple H and Stephanie McMahon brought their three daughters to the White House to attend the swearing-in of Linda McMahon, the head of the Small Business Administration. The Levesque kids had the opportunity to take a photo in the White House with the president of the United States, Donald Trump. They held up a photo of Trump shaving Vince McMahon’s head at WrestleMania 23. 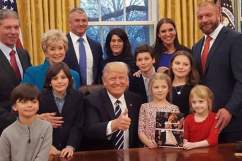 Read More
Pro Wrestling, Wrestlemania, WWE, WWE Raw, WWE Smackdown
Off screen, WWE's Triple H and Stephanie McMahon have been married for almost 15 years, and they have three children together.