Preview
Less than 24 hours after an attempted attack on their team bus, Borussia Dortmund must play Champions League football against Monaco.

It was a tense scene at Signal Iduna Park Tuesday night, as Dortmund fans learned the fate of their team via stadium announcements. The visiting Monaco fans were respectful of the situation, chanting their support for Dortmund before exiting the stadium. Following a successful evacuation, the visiting club hung around a bit longer, holding a short training session on the field.

Without Marc Bartra in defense, Dortmund could struggle against Monaco’s explosive offense. The current leaders in Ligue 1 are one of the highest-scoring clubs on the planet, and survived a 6-6 slugfest with Manchester City in the previous round.

Bartra suffered a broken wrist in the incident, and underwent immediate surgery Tuesday night. He is expected to be sidelined for several weeks, and will miss both legs of his team’s Champions League matchup.

Kickoff starts at 12:45 p.m. Eastern and will air on Fox Sports 2. Keep this page refreshed after kickoff for the latest updates, including video of every goal. 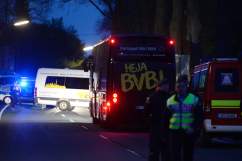 Find out to watch this match in Spanish at AhoraMismo.com: