Things have not been going so good for Blake Griffin lately, either on or off the court. After a bright start, Detroit has lost their last three. Now, according to TMZ, Griffin’s ex-girlfriend and mother to his children, has filed a lawsuit against the former Rookie of the Year. The lawsuit depicts Griffin as being coldhearted to Brynn Cameron and her children since he hitched up with Kendall Jenner.

The lawsuit includes a line that appears to directly dig at Griffin’s career saying, “Griffin himself, however, knows very well what breaching promises is all about. After all, Griffin had no problem trading Brynn Cameron, his former fiancee, and the mother of this two children, for reality TV star, Kendall Jenner.” The lawsuit has been filed by Bryan Freedman and is thought to be demanding millions of dollars. In August 2018, Radar Online reported that Griffin was being forced to pay $258,000 in child support payments to Cameron. That number was later disputed by TMZ, how reported that Griffin was in reality being forced to pay $32,000.

Griffin joined the Pistons in January 2018 in a contract that’s expected to net him $170 over the next five-years. US Weekly first reported in October 2017 that Griffin was dating Kendall Jenner. The article announcing the happy couple mentioned that Griffin and Cameron had split in July 2017. TMZ says that Griffin abandoned the couple’s wedding plans a week before the celebration because Cameron wouldn’t sign a prenup. The couple had planned to exchange rings in St. Barth’s towards the end of July. After the marriage was broken off, Griffin went to Las Vegas to party for a week, solo. They had two children together, Ford, 4, and Finley, 1.

Here’s what you need to know about Griffin’s babymama: 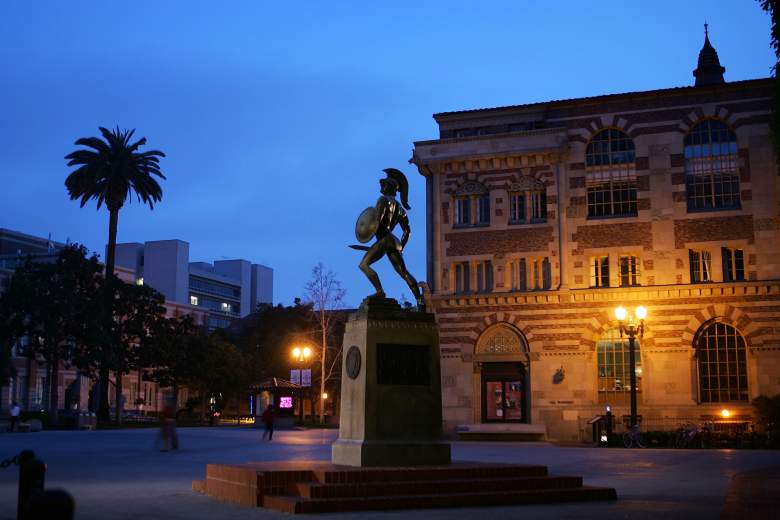 A statue of the school mascot, the Trojan, stands on the campus of the University of Southern California on March 6, 2007 in Los Angeles, California. (Getty)

Like her boyfriend, Brynn Cameron has a passion for basketball, and she used to play it herself.

According to The New York Times, Cameron played basketball at the University of Southern California, graduating with the class of 2009.

Cameron’s bio on the University of California website shows that during her freshman season, she emerged as the top scorer with 9.8 points per game. She also ranked number 25 in the nation in three-point field goal percentage.

Cameron is from Newbury Park, Los Angeles, and she was raised Mormon. By the time she was nearing the end of her senior year, it was clear that her basketball career was coming to an end, as she had to have two hip operations.

She graduated from the University of Southern California in 2009 with a degree in sociology.

2. Cameron Says She Counseled Griffin After He Felt He Lost Control of the Clippers to Chris Paul

The TMZ report says that Cameron “did everything for Blake.” The article goes on to list all of the roles that Cameron played in Griffin’s life, in addition to being the mother of his two children. In exchange, Cameron says that Griffin convinced her to leave behind her own career in design and marketing. In addition, Cameron is alleging that during Griffin’s issues with former Clippers team mate Chris Paul, she acted as his therapist. At the time, Griffin felt that he had ceded control of the team as Paul had become their most influential player.

The lawsuit reads via TMZ, “[Cameron] strengthened Griffin’s bond with his teammates and allowed the organization to see a different side of his personality rather than the hard-partying man-child Griffin had been prior to their cohabitation… Griffin abandoned his family because he cared more about the glamour of being a Hollywood celebrity than being a father and family man.”

3. Cameron Has a Kid With Former USC Quarterback Matt Leinart 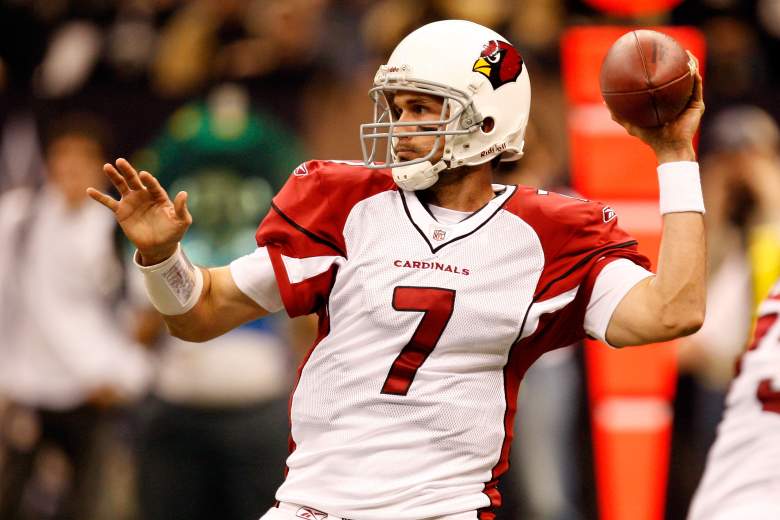 Long before she started dating Blake Griffin, Brynn Cameron was with Matt Leinart.

Leinart was a student at the University of Southern California, and it was here that Leinart and Cameron met. According to the New York Times, the two met when Leinart introduced himself during study hall; they bonded over basketball and over the fact that they wore the same uniform number, 11.

While Cameron was still in school, Leinart was drafted to the Arizona Cardinals. Cameron and Leinart broke up after about a year of dating, but shortly after their relationship ended, Cameron learned she was pregnant with Leinart’s child.

Cameron gave birth to her son, Cole, in 2006; she subsequently took a year off from school in order to care for Cole.

She explained to People that she felt like her life was ending when she found out she was about to have a child.

“I thought, ‘Why me?’” she said. “I thought, ‘You’ve just ruined your life.’ I thought my life was over, school was over, basketball was over. I just thought I was done. I kept saying, ‘This is horrible’ and ‘This is the worst thing that ever happened. You’re supposed to graduate from college and then get married and then start a family.’ I thought the baby and I were done for.”

Cameron also said at the time that she was the one doing all the work to take care of Cole, despite what Leinart was telling the media.

She said, “It’s kind of hard for me as the mom, I’m with Cole probably 99.9 percent of the time – to open a magazine or read a newspaper article with Matt saying, ‘Oh, I love being a dad. I love changing diapers. I love doing this.’ I’m like, Wait, what?”

3. At the Time, Griffin & Cameron’s Son Was Born, it Was Reported They Were No Longer Together 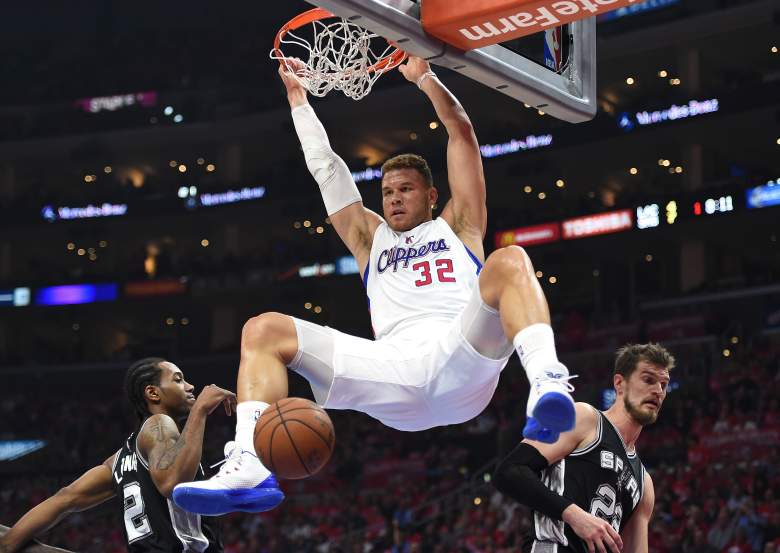 Blake Griffin during the first half of Game Two of the Western Conference quarterfinals of the 2015 NBA Playoffs at Staples Center on April 22, 2015 in Los Angeles, California. (Getty)

In August 2013, TMZ reported that Brynn Cameron had just had a child with Blake Griffin.

Ford Wilson Cameron-Griffin was born on August 1st, 2013. At the time, though, it was reported that Blake and Griffin were no longer together.

The following year, in August 2014, TMZ reported that Brynn and Blake were back together, as they were seen hanging out at the beach on Labor Day with their son, Ford Wilson Cameron-Griffin.

In 2015, TMZ reported that Brynn and Blake broke up “a long time ago” but that they frequently go on vacations together with their son, Ford. 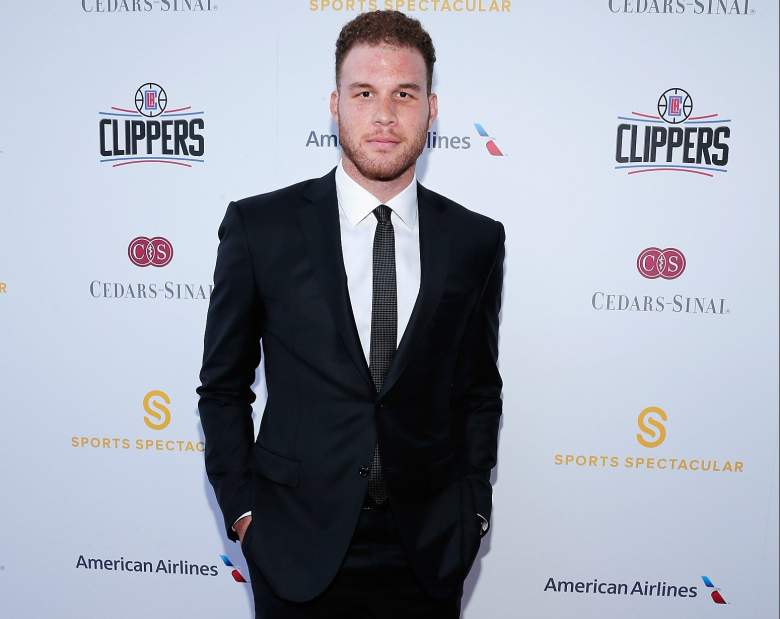 According to TMZ, Cameron gave birth to a baby girl in a Los Angeles hospital in September 2016. By this point, it seemed that Brynn and Blake were together again, with TMZ describing them as a “longtime couple.”

In an interview with GQ, Blake Griffin said that being a father definitely changed him just as everyone said it would.

“This is what everybody says, and I didn’t really get it,” Griffin told GQ. “People were like, ‘Oh, it’s so life-changing. It makes you think about things in a different way,’ and you’re always like, ‘Oh yeah, totally.’ But then, when it happens, you’re like, ‘Woah. All of those people were right!'”

5. Griffin Once Called Her Brother the ‘World’s Greatest Tight End’

Not only is Brynn Cameron’s boyfriend a famous athlete, but so is her brother.

Brynn Cameron’s brother is Jordan Cameron, who played football for USC and after graduation was drafted by the Cleveland Browns; he was the 102nd pick in the 2011 NFL Draft. Just prior to the draft, Griffin appeared in a video with Jordan where he hailed his one-time future brother-in-law as the “world’s greatest tight end.”

Then, in 2015, Jordan Cameron signed a two-year, $15 million deal with the Miami Dolphins, but in 2016, he suffered a season-ending injury. In March 2017, he announced his retirement from the NFL, citing four concussions suffered in six seasons.

“I started thinking about concussions too much,” he told ESPN at the time of the announcement. “You can’t play football like that.”

He also said that he had to think about his son, Tristan, who just turned 8.

“I want to be there for him,” Cameron told ESPN. “And I want more kids, and I want to be present with them. I don’t want them dealing with things that we’ve seen some other guys are dealing with.”