Mark Few has been the head basketball coach at Gonzaga University since 1999.

In 2017, Gonzaga lost to the North Carolina Tar Heels (71-65) in the final game of the NCAA tournament.  Prior to the 2016-2017 season, Few’s Bulldogs had only reached as far as the Elite Eight round in the tournament, but they have been a fixture in the tournament since the mid-90s.

This year, they are going for greatness once more, seeking the ultimate glory: An NCAA Championship title.

Few has had the support of his wife, Marcy Laca-Few, and the couple’s four children, in his coaching endeavors. This year is no different. 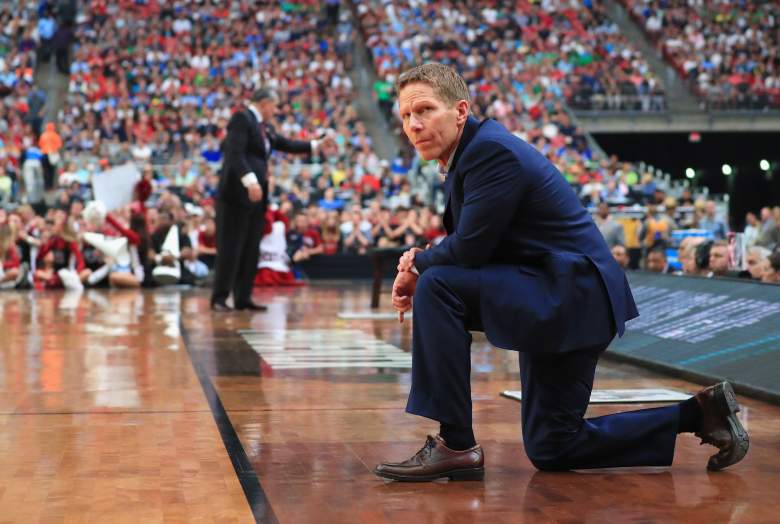 Few is the son of a Presbyterian pastor and was a point guard on the basketball court in high school.

But a shoulder injury during his senior year in led him to put his basketball dreams aside and attend the University of Oregon. He ended up graduating from the school with a degree in physical education in 1987 and pursued a coaching career. He worked as a graduate assistant in 1989 for Gonzaga in Spokane, Washington.

One year later, Few was promoted to a full-time assistant, and that’s when he first met Marcy Laca. Marcy is reportedly of Basque descent and was a student at Gonzaga when the two met. She had been working at the front desk at the school’s athletic facility.

Marks father, Rev. Norm Few, was the officiant at the couples’ wedding in 1994.

2. The Couple Has 4 Children Together

Mark and Marcy, 47, have four kids together.

The Fews had their first child together in 2000, Austin James (A.J.), and then had another son, Joseph Dillon, two years later. In 2006, they welcomed their first daughter, Julia Ann Elizabeth, and three years later, their family became complete when their third son, Colt Walker, was born.

Over the years, Few’s children have been active in helping the Bulldogs’ basketball team out. His daughter and three sons often attend practices, travel with the team, and can be seen handing out towels and water bottles to players on the bench.

In a Bleacher Report article, Few said that he and his children enjoy taking a break from work and playing their favorite game, “Get to the Base,” a combo of hide-and-seek and tag.

“People think they should get a badge of courage for getting to the office at 7 a.m. each morning and leaving at midnight. People that do that are missing the boat. They’re sacrificing their relationships with their families. It doesn’t have to be that way,” he told the outlet.

3. The Fews Have Organized a Charity Golf Event

During their time in Spokane, the Fews have remained very active in the community through philanthropy.

The couple has organized a Coaches vs. Cancer golf event every year since 2002, and have raised over $6.7 million since they started.

In 2008, the couple was awarded the Nell and John Wooden Coaching Achievement Award by the World Sports Humanitarian Hall of Fame. You can watch Few discuss that honor in the video below.

He told Gonzaga in an interview after the event that it’s a great honor to be in a class with other legendary inductees.

“To be honored for what you do away from the court, and to be honored with an award named after a truly outstanding couple like John and Nell Wooden is humbling. When you look at the list of people who have won this award in its short existence, and when you look at the members of the World Sports Humanitarian Hall of Fame, it’s like reading a Who’s Who in sports. It is an honor to be associated with these legends,” he said.

Mark and Marcy Few dropped the puck before tonight's game as a part of Coaches vs. Cancer. #cvc #gochiefsgo pic.twitter.com/GH5zdjhC

When the Fews aren’t involved in basketball and have some free time, the family enjoy spending time outdoors.

For leisure, Mark and Marcy enjoy cycling on bike trails near their home. But, as he told Bleacher Report, there’s one thing that relaxes Mark more than anything else: Fly fishing.

Mark and his son A.J. have gone on fishing trips before and even traveled to Alaska, catching “hundreds” of trout everyday. Mark talked about how much getting out on the water and enjoying nature helps clear his mind.

“You can walk off the 18th green and be mad about missing a birdie putt that cost you a bet with your buddies. But with fishing, you never leave mad because of the journey you took to get there. It’s so peaceful, and there’s no cell service. It’s a great way to unwind and think about your team. When you come back you’re not all tight and wound up,” he told the outlet.

Fly fishing sets him at ease so much, that it helps make him a better all-around person.

“My wife will tell you, (I’m) a much better parent, a much better husband. Everything. These seasons and the job can become all-encompassing sometimes. And so it’s good. It’s a great time to think and think about your team and plan and do things in that area because you have a lot of time just standing there in the river. I think (fly-fishing) is probably the biggest thing that I’ve always tried to do,” he told ESPN back in 2015.

5. When He Had Just Starting Coaching, He & His Wife Were Taken Under Roy Williams Wing

We appreciate the support of Marcy and Mark Few and all they do for our community.

We are behind you, Coach. pic.twitter.com/Ag1VsNUJcv

When Mark first entered the collegiate coaching world, it was overwhelming. But North Carolina coach Roy Williams was the one to help mentor Few, to an extent, and welcome him to the NCAA.

Mark and Marcy were at a basketball camp sponsored by Nike surrounded by coaching greats like Jim Boeheim, Mike Krzyzewski and Williams, The Chicago Tribune reported.

Mark said that he and his wife didn’t feel like they were “worthy” to be around the legendary coaches. Williams and his wife, Wanda, stepped in to break the ice.

“We didn’t feel like we belonged when there’s Roy and Coach K and Boeheim and all these guys are walking around. And, bang, right when we got there he and Wanda took Marcy and I under their wing and treated us like we were anybody else. Couldn’t have made us feel better and more welcomed,” he told the outlet.

Few and Williams have remained friends ever since. In fact, when UNC and Gonzaga were set to play each other in the Sweet 16 round of the NCAA tournament in 2009, the two made plans to get together and go to a Mississippi casino.

They found out their hotels were right across from each other, and agreed to get each of the coaching staff’s to go out after players’ curfew to a casino about 40 miles away in Mississippi. They all played craps together for about three hours, according to the Chicago Tribune.