Totti and Blasi pictured together in 2010. (Getty)

One of the only people who will be delighted by Francesco Totti’s impending retirement will be his celebrity wife, Ilary Blasi. The couple has been together since 2003 and married in 2005. They have three children together, Cristian, born in 2005, Chanel, born in 2007 and Isabel, born in March 2016.

On May 28, Francesco Totti, the greatest player in the history of Roma, will play his final game for the club at the age of 40. Totti made his debut for Roma in 1993. The legend will play his last game for AS Roma on May 26 against Genoa at the Stadio Olimpico with the Giallorossi still looking to cement their position in second place.

Here’s what you need to know about the love of Totti’s life:

1. Blasi Says She’s Not Sure How it Will Be With Totti Around the House All the Time

Blasi told Gazzetta Dello Sport on May 26 that she wasn’t sure how it will go now that Totti will be at home all the time. Blasi said, “How will I do? I do not know, we’ll find out by living.” Blasi added that she would call the interviewer to let him know how it is. The star also said that she and the whole family would be present at Totti’s final game. 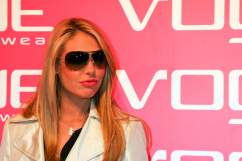 2. The Couple’s Wedding Was Broadcast Live on Italian TV With the Proceeds Going to Charity

Totti and Blasi embracing at their 2005 wedding. (Getty)

Totti and Blasi tied the knot in Santa Maria in Aracoeli. The entire wedding was broadcast all day on Italian television. The proceeds from the event were donated to charity. Roma legend Bruno Conti attended as did perennial bad boy Antonio Cassano. It was the then-Mayor of Rome Walter Veltroni who administered the couple’s wedding. When Totti arrived at the event, he was greeted by a group of Roma fans who unfurled a banner reading, “Pride of Rome.”

In a 2016 New York Times feature, Totti admitted that he only moved out of his parents house when he married Blasi.

Totti said in a March 2017 interview that in his first date with Blasi he picked her up in a Ferrari because “it was the only car available to me.” Totti added that he got a kiss on the couple’s first date. When talking about his children, Totti says that his eldest son, Cristian, wants a brother. Though Totti says when Cristian was born, “We were not ready to be parents, but then we found the right balance.”

3. Blasi Says of Her Marriage, ‘Sex Is Important’

On Blasi’s birthday in 2017, Totti took to Facebook to pay a romantic tribute to his wife. The Roma No. 10 wrote, “Time passes, but not love for you that is strengthened year after year. Happy birthday my love.” A month earlier, Totti talked about meeting Blasi for the first time saying, “It struck me wright away… I said to myself: This is the woman of my life.”

Famously, in 2002 after scoring against Roma’s hated rivals Lazio, Totti revealed a t-shirt dedication to his wife reading, “You Are Unique.” Then, in 2011, Totti did a similar tribute with a shirt reading, “You are always unique.” Totti said of this celebration according to the Guardian, “On Saturday we had our nine-year anniversary. It’s destiny: I scored when we got together and again this time.”

Totti’s other celebration, sucking his thumb, is a joke at his wife’s expense. The Roma captain has said that it’s a bad habit of Blasi’s and he likes to poke fun at it.

While Blasi says that while “Sex is important, it does not last a lifetime.” That’s a probably a good thing considering Totti admitted in a March 2013 interview that he lost his virginity to a 17-year-old girl when he was only 12.

4. Blasi Has Been on Italian TV Screens Since She Was a Small Child

Like her husband, Blasi is a child of Rome. Her start in entertainment came when her mother’s friends talked about an commercial audition that required a blonde girl. Blasi got the part. The ad was for Italian cake Panettone. As she got older, Blasi turned to modeling, even posing nude in her early days. In 1998, Blasi competed in Miss Italy at age 17 but didn’t win. Since then, Blasi has hosted many different TV shows in her homeland, notably on MTV. The Guardian referred to Blasi as a “pneumatic gameshow host” in pre-World Cup 2006 feature on player’s wives.

Aside from her hosting duties, as a child, Blasi starred in the TV horror movie The Sweet House of Horrors.

More recently, Blasi appeared with her husband as one of the faces of Vodafone in Italy. ESPN.com described the ads as “cringeworthy.”

As of May 2017, Blasi hosts three different shows on Italian television.

5. Totti Says That He Is Being Forced Out of Roma

Francesco Totti – Figlio di Roma [Farewell Tribute]The eight king of Rome, the last emperor, the last gladiator, whatever you want to call him, Francesco Totti is for sure among the titans of Italian football, a player whose relationship with his team and city is unrepeatable. Follow now: goo.gl/pvx1Lt Contact / Instagram: goo.gl/yhIa0X – Tracklist: Hans Zimmer – First Step x Where…2017-05-27T20:57:31.000Z

As Totti prepared for his final game, it’s being widely reported that he is being forced out of Roma. At least, that’s what the legend told his teammates at an end-of-season dinner on May 25. Totti allegedly told his teammates, “These have been complicated, difficult months. I would have liked to help you all more, but you know how things went. Now they’ve forced me to stop, and I can’t even think of myself not wearing the Roma shirt anymore. Anyway, thanks to all of you for your kindness.”

Roma are preparing to offer Totti a job in the team’s administration after his retirement. The official website report on the Totti dinner did not mention his assertions.

Totti’s problems with Roma’s management were likely not helped in September 2016 when Blasi referred to Roma coach Luciano Spalletti as a “little man” in a Gazzetta Dello Sport interview. Blasi said, “I do not know anything about football, but the whole situation was surreal. It was like science fiction, I could not believe it. He was kicked out of his own house. You do not do something like this. But the fans did not abandon him.”

Totti had been dropped upon Spaletti’s return to Roma after insinuating in an interview that the pair did not get along. Roma legend Carlo Mazzone has backed up Blasi’s assertions about Spaletti. Though Blasi later said that her difference with Spaletti had been patched up.

Read More
5 Fast Facts, Breaking News, Soccer, WAGs
One of the only people who will be delighted by Francesco Totti's impending retirement will be his celebrity wife.