Chicago Cubs first baseman Anthony Rizzo has been an indispensable part of the team since he joined the franchise in 2012. He already has a World Series ring and he’ll soon be adding another one to his collection: a wedding ring. Rizzo announced on June 1 that he’s engaged to his girlfriend, Emily Vakos.

Here’s what you need to know about his fiancee and their relationship.

1. Rizzo & Vakos Got Engaged on Lake Michigan With Fireworks Going off

In the movies, it’s always cool to see fireworks go off when a couple gets together. That became a reality for Vakos and Rizzo, who had fireworks go off over Lake Michigan when he popped the question on June 1. The Cubs were off that day.

“We were on a boat on Lake Michigan, had some fireworks go off and it was great,” Rizzo told the Chicago Tribune. “She was totally surprised, so that’s one I somehow kept under wraps.”

After she said yes, former Cub Dexter Fowler texted Rizzo, asking if he knew why the fireworks went off! He also received other text messages from his friends, congratulating him on the good news.

“Do I have a date?” he told the Tribune. “Yeah, it’s June 2nd. No, not yet. Who knows? The excitement is still there. We haven’t talked about that really.”

2. Vakos Is a Real Estate Broker in Chicago

Vakos’ LinkedIn profile shows that she is currently a real estate broker in Chicago. She works for @Properties. You can find her @properties profile right here.

The 23-year-old Vakos attended Arizona State University from 2012 to 2016 and earned a degree in Nutrition and Food Management. While in college, she interned for the Scottsdale Unified School District in 2015.

3. She’s Really Serious About Nutrition & Has a Degree from Arizona State University

Vakos is serious about nutrition. Her Arizona State degree is in Nutrition and Food Management. She took classes in the university’s College of Health Solutions.

While in college, Vakos tried her hand at blogging, creating The Food-1-1. She hasn’t used the site since 2014. She used it to post healthy recipes and shared her thoughts on recent health studies. Vakos also shared various college projects on the site.

On her About page, Vakos described herself as “your average college student who fights the constant struggle we all seem to know so well: ‘Do I succumb to the temptations of my imaginary evil twin (who seems to love food a little too much) or do I strive to eat clean?'”

Vakos reportedly worked with the Cubs as a nutritional intern, which is how she met Rizzo. 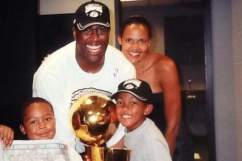 4. Rizzo & Vakos Have Gone on International Trips Together Already

Got to dance with the stars last night ⭐️????#ladyandthegramp

Rizzo has a huge following on social media, with 621,000 followers on Twitter and 685,000 followers on Instagram. Cubs fans who follow both get a big dose of Rizzo adventures every day, so it’s no surprise that Vakos has been seen in dozens of photos. The couple have been on several trips together.

Rizzo posted a photo with Dancing With The Stars contestant and former Cubs catcher David Ross, with Vakos. They even went to the Grammys together! They rang in the New Year together in the British Virgin Islands.

In December 2016, the couple went to Thailand and Vietnam. 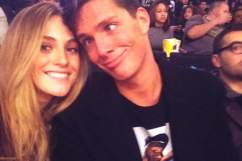 Rizzo and Vakos have been together for about a year, as Rizzo was previously linked to Chelsea Smith. Rizzo and Smith were seen together in an Instagram post from Rizzo’s 2016 New Year’s Eve boat party. Smith was tagged in the photo.

In a 2014 interview with ADrinkWith.com, Rizzo admitted that it’s tough even for him to ask a girl out on a date. He also said he once downloaded Tinder but thought it was “so ridiculous” and didn’t use it.

“It’s tough nowadays,” Rizzo said in 2014. “Lately I’ve been going with the phone call because girls don’t expect phone calls anymore. Everyone wants a text or says, ‘Oh, I’ll text you,’ but I’ll call them. I’m gonna bring it back to when I was young where I had to call their parents’ house and say, ‘May I speak to…'”

Now, Rizzo doesn’t have to worry about dating anymore!