Christian Yelich could be in line for a big day Sunday. (Getty)

The Sunday slate on DraftKings officially begins at 1:07 p.m. EDT, so it means the lineups need to be set early. It’s a nine-game slate complete with some great matchups and even better fantasy plays. We’re going to dive in and select the top plays for the day, starting with one of the hottest (and most expensive) players in fantasy baseball right now.

Here’s the Sunday daily fantasy baseball picks for June 4, beginning with the ace of the Boston Red Sox, Chris Sale.

Chris Sale is hands down the top pitcher on this slate. (Getty)

Sale is going to cost a pretty penny, but that was to be expected. While Sale is boasting a superb 6-2 record with a 2.77 ERA, he also has 110 strikeouts in just 11 games. Pairing this with the fact that his opponent, the Baltimore Orioles, strike out the sixth-most in the MLB at 8.87 times per game, and it equals out to a golden opportunity. Pay the price for Sale.

When it comes to catcher a solid route to go is looking for a player with a great matchup, a mid-level cost and the potential to hit home runs. Realmuto checks off all those boxes and faces 25-year-old Braden Shipley, who’s only made one start this season. In his one start, he gave up three earned runs in four innings with only two strikeouts. Last season, Shipley pitched 70 innings, allowing 14 home runs and 80 hits. It’s a solid spot for Realmuto and he won’t break the bank either.

Carlos Santana could prove to be a sneaky great play in DFS. (Getty)

Ownership on Santana may be a bit low as he’s totaled just 14 fantasy points in the four games heading into Saturday. Also, he draws Eric Skoglund, who’s started just one major league game and looked very good in it. He gave up just two hits in 6.1 innings so the popular consensus could be to fade the Indians a bit. But, that’ll only make Santana an even better GPP play. Betting on the 24-year-old to have a repeat performance of his first game is asking a lot and the Indians are road favorites for a reason. Another reason to like Santana is that if Skoglund is pulled somewhat early, he’ll be up against the Royals bullpen, which ranks No. 25 in the league in ERA this season.

Dee Gordon can do a little bit of everything and makes for a great DFS option. (Getty)

Keeping with the Marlins trend is a pick of Gordon, who’s been tallied at least nine fantasy points in four of five games heading into Saturday. Another massively important thing about someone like Gordon is the fact that he’s capable of stealing bases. On the year, he ranks No. 2 in the league with 17 stolen bases. If he’s able to get a single and a steal then he’s nearly at double-digit points in a great matchup. No reason to look away from Gordon Sunday.

Nicholas Castellanos has been rolling and there’s no reason to expect it to slow down. (Getty)

It’s hard not to fall in love with this price tag for Castellanos, who has been a White Sox destroyer in the past two games. The Tigers have scored a combined 25 runs in two games against the White Sox in this series, and Castellanos has totaled four runs, four walks, two RBIs, a homer and a double. His opponent, David Holmberg, is a bit of a wild card, as he’s played for three teams in four seasons, and in 14.1 innings this season has allowed four earned runs and five walks. Castellanos’ ability to draw walks could come into play here, but his hot bat is just as intriguing.

Xander Bogaerts has a great matchup and big upside. (Getty)

Any main Red Sox player will cost a pretty penny on Sunday, but Bogaerts is worth it. Not only is he tied for the ninth most hits in the MLB this season, but he has a solid eight stolen bases as well. He draws a matchup with Chris Tillman who has a 5.87 ERA and only 16 strikeouts in five games. Right now, Tillman’s stuff isn’t there, and the Baltimore bullpen has allowed 21 home runs, which has to leave Bogaerts salivating at the opportunity.

Christian Yelich can save some salary cap on DraftKings and has big upside. (Getty)

It’s apparent at this point that a Marlins stack may be a strong route to go on Sunday. Yelich has been strong against the Diamondbacks this season, as StatMuse shows he’s totaled four hits in 11 at bats, two RBIs, two runs, a home run and a stolen base. The best part? Yelich’s price tag isn’t that of many of the top hitters in baseball on Sunday, so you’ll be able to spend up in other places, and potentially be able to afford Sale at pitcher.

Mookie Betts comes with a hefty price tag, but is worth paying up for. (Getty)

Betts is in the top 50 in the league in hits, top 35 in RBIs and top 20 in steals this season. Now he draws the previously mentioned Tillman and the Orioles. Before Saturday’s game vs. Baltimore, Betts had been in a slump but broke out with two hits, one of which was a double, a RBI and a run. The matchup Sunday vs. Tillman looks like a prime spot for Betts. 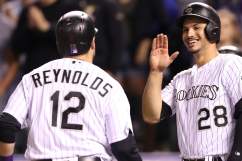