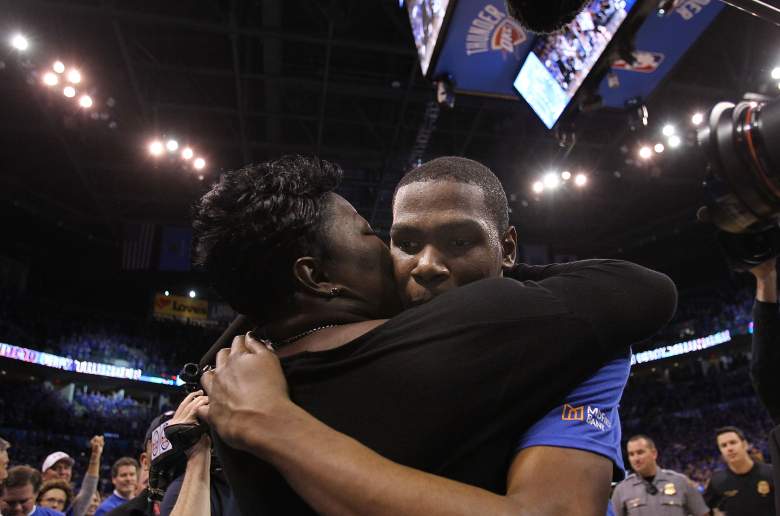 Kevin Durant has endured a lot over his lifetime to make it to the NBA. From his humble beginnings being raised by a single mother, to becoming one of the most recognizable NBA players in the world, Kevin’s family has been with him through the highs and lows.

Kevin often speaks of the dedication of his mother, Wanda Durant, as she raised her two sons on her own. Kevin remains close to his older brother, Tony Durant.

After his father walked out on the family at a young age, things have been rocky at times between Kevin and his father, Wayne Pratt. Kevin has been able to forgive his father’s mistakes as the two reconnected when Kevin was older.

Get to know the family behind the NBA superstar.

1. Kevin’s Mother, Wanda, Was Hurt by Oklahoma City Fans Reaction to Her Son

Reunions are not always amicable. Kevin was greeted with a harsh reception in his return to Oklahoma City after signing with the Warriors. Many Thunder fans wore cupcake shirts referring to an inside joke Russell Westbrook posted on Instagram after Kevin signed with the Warriors. It was essentially a way of calling Kevin soft for leaving.

Wanda spoke with ESPN about her son’s return to Oklahoma City.

They called him a snake, a sellout, a b—-. It’s just a sad day. I understand that they loved him. I do understand it. But the name-calling. The people with the cupcakes on their backs. … It didn’t have to be like this.

This is not the first time I’ve been back since Kevin left. This is maybe my fourth or fifth time. Every time that I’ve been back, people seem like they are afraid to say something nice to me. People will whisper, ‘There’s his mom. Ooooooh!’

There are people who tell me they still love him. But then you have the people who shot his jersey up. My son poured his heart and soul into this place for eight years, and for them to treat him like this because he decided to go someplace else to play is really tough. 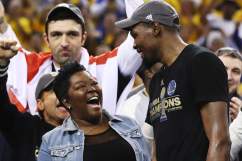 2. Kevin & His Father Have Remained Close After Enduring a Rocky Start to Their Relationship 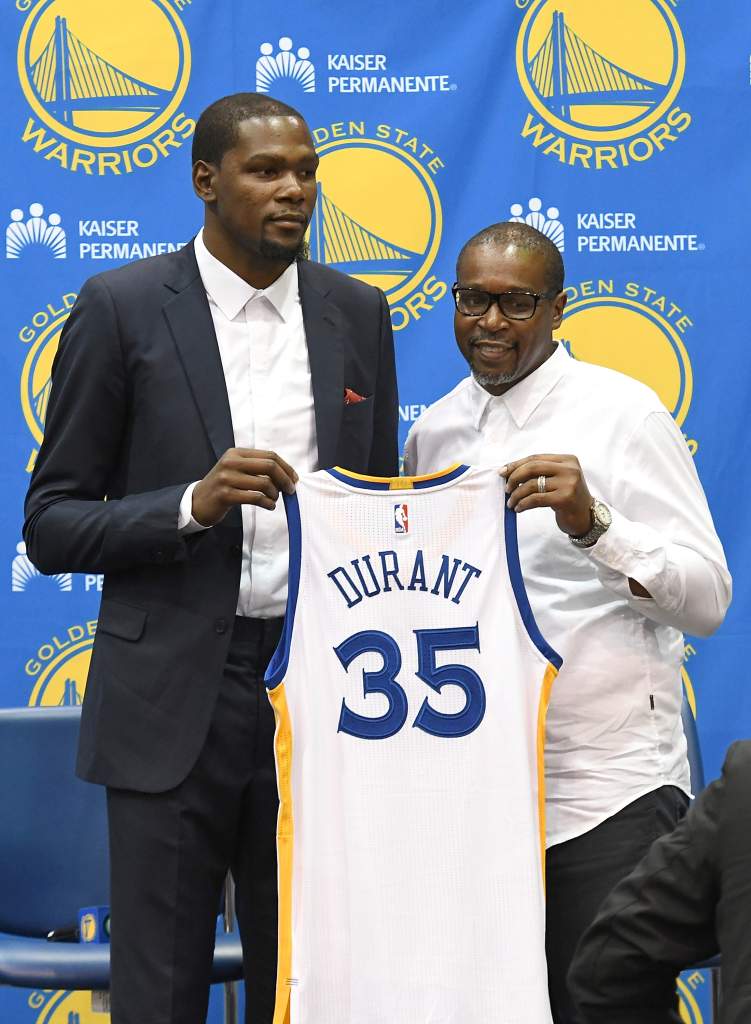 The story of Wanda’s journey as a single mom has been well-documented. She partnered with Lifetime to make a movie about raising her sons. “The Real MVP: The Wanda Durant Story” continues to air on Lifetime well after its 2016 release.

When Wayne left his two sons, Kevin was just a one year old. According to The Washington Post, it took Wayne a decade to build a solid relationship with his sons. He explained that he left his family out of fear.

“I felt like I was immature, selfish, I was young. I didn’t know what I was getting myself into,” Wayne told The Washington Post. “But my sons helped me realize how important it was to be in their lives by always wanting me to be around.”

3. Kevin’s Father Was With His Son in the Hamptons When He Made His Decision to Sign With the Warriors

The two have come a long way to rebuild their relationship. Wayne played an integral role in helping Kevin make his 2016 free agent decision. Kevin gathered a few trusted people together at an undisclosed location in The Hamptons in New York. Wayne was part of that group and recounted his advice to The Undefeated.

“For once in your life be selfish and think about yourself,’” Wayne told The Undefeated. “That’s the only thing I could tell him. And it’s hard for him to do that because that is not in his personality. But sometimes in your growth as a man you have to be selfish and make decisions that are based on him and his future family.”

While Wayne normally stays out of the spotlight, he was with his son as Kevin was announced as a new member of the Warriors team. Wayne explained to The Undefeated he was supportive of whatever Kevin decided.

When he woke us up, I know he was confident in the decision that he made. He woke us all up in the morning saying he knew where he wanted to go. We were asleep. He told us he wanted us to go downstairs to talk to him. He said, ‘I want to be a Warrior.’

Kevin’s older brother, Tony, may not have made it to the NBA, but still had a solid basketball career. Tony played college basketball at Towson. According to Sports Reference, Tony played two seasons (2007-2009) at Towson. He averaged 6.2 points and 3.4 rebounds over his college career.

The two brothers remain close to this day. Kevin spoke to ESPN about all they have been through.

“He was the first person I hugged when my name was called [at the NBA draft],” Kevin told ESPN. “We went through so much together that people don’t know about, stuff my mom doesn’t even know about. My mom always told us that in the end, we only have me and him, we only have each other. We’re sort of like the same person.”

Many fans have wondered how Kevin got the Durant last name. According to The Undefeated, Kevin opted to take his grandfather’s last name. His father’s last name is Pratt, but it points to the complicated journey the two have been on since Kevin’s father left the family at a young age.

Things have improved as Kevin speaks regularly with both his parents. He spoke with The Undefeated on the impact his father has on his free agent decision.

“Support. He knows who I am deep down inside. He wasn’t there trying to out-talk anybody. He just listened. And if I needed some advice, I went to him. My mom was amazing in this whole process. After every meeting, I was texting and calling her and I was just asking for her advice. She was so happy. I wish she was here right now, but it was just such short notice,” Kevin told The Undefeated.