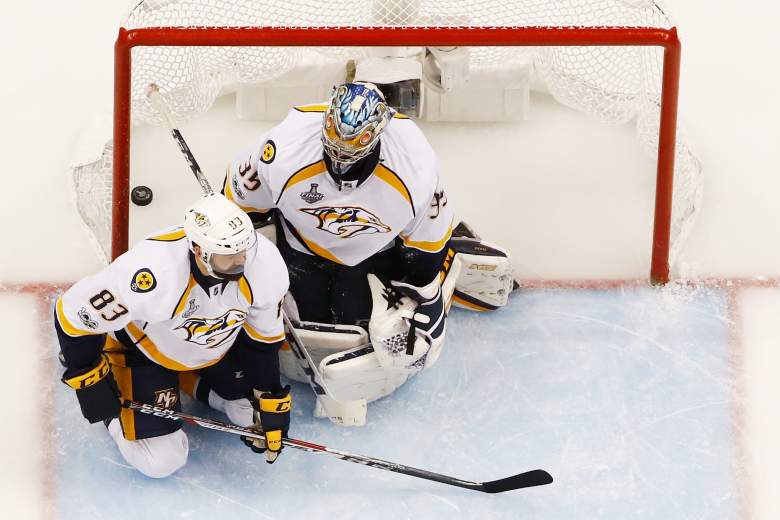 Can Pekka Rinne and the Nashville Predators get it together in Game 3 Saturday night? (Getty)

Game 2 was more like it for the Pittsburgh Penguins.

After surviving and winning Game 1 with only 12 shots on goal, the Penguins put together a much cleaner performance in Game 2, dismantling Nashville and goaltender Pekka Rinne, 4-1 Wednesday night in Pittsburgh.

The Predators and Pontus Aberg jumped ahead 1-0 a little more than midway through the first period but that was about the only positive moment of the night for Nashville as the Penguins would score four unanswered, including three goals in the third period in a span of 3:18.

Rinne was pulled 3:28 into the third period, having given up four goals on 25 shots. Through the first two contests, Rinne — who prior to the Stanley Cup led the NHL in goals against average for the playoffs — has allowed eight goals on only 36 shots. That’s good for a paltry .777 save percentage.

So where do the Predators go from here? Let’s take a look at the odds, puckline, and over/under for Game 2:

What the numbers tell us is that Vegas likes the Predators to take advantage of home ice and win Game 3 but probably not by more than two goals.

The return on taking the Predators by more than two goals (+230) is greater than it was for taking the Penguins by the same margin in the first two games (+195 and +210 respectively). So while the computer gives the Predators the advantage — mainly due to playing at home where they are 6-2 so far this postseason — it figures to be a tight game.

It’s obvious the Predators are desperately missing the presence of center Ryan Johansen, who was tied with Viktor Arvidsson for the team-lead in points during the regular season. He’s out for the remainder of the postseason due to a left thigh injury.

Speaking of Arvidsson, Nashville needs a lot more out of him in order to get back into this series. The 24-year-old Swede has registered just one assist, four shots and is a -4 through the first two games.

Fellow Swede Filip Forsberg — who had 15 points this postseason prior to the Stanley Cup — has struggled, as well. He’s without a point and is a -2.

But the real problem for Nashville has been the play of Rinne as noted above. He looks like he’s fighting it out there, almost as if he’s afraid of the puck.

An optimistic Predators fan could attribute his performance to Stanley Cup jitters and would say he will turn it around at home. He does hold an impressive 1.62 goals against average at Bridgestone Arena during these playoffs.

So, let’s be that optimistic Predators fan and say Rinne gets his act together, and Arvidsson and Forsberg find the back of the net. Heavy goes with Nashville in Game 3 and takes the OVER on the goal total.