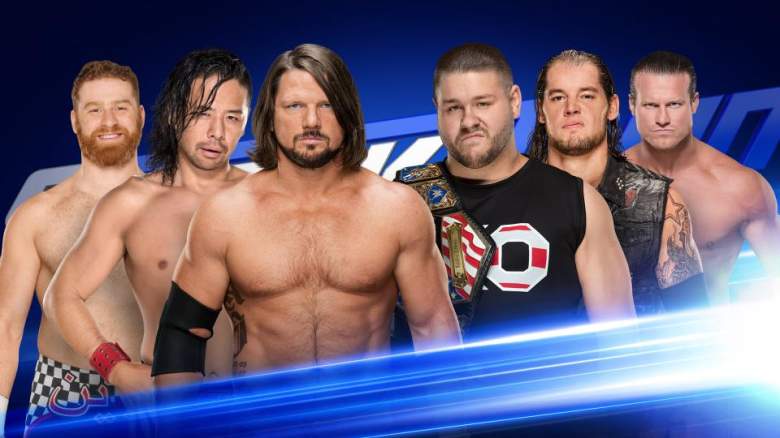 A new episode of SmackDown Live just finished airing on the USA Network. Here’s what happened:

9:32 – Backstage, Lana says that she’s going to shock the world by crushing Naomi this Sunday and becoming the first ever ravishing SmackDown Women’s Champion.

9:24 – In another Fashion Files segment, Fandango finds that Tyler Breeze has been attacked. He describes his attacker as someone with greasy hair.

9:11 – Backstage, Randy Orton says that the time for conversation is over. At Money in the Bank this Sunday, he’s going to take back what’s his, he says.

9:03 – Backstage, Kevin Owens approaches Dolph Ziggler and Baron Corbin. He says that he doesn’t like either of them, but they have to work together tonight.

8:55 – Jinder Mahal enters. He says that this Sunday, he will prove that Randy Orton is nothing but a coward. Orton is afraid of letting down his hometown of St. Louis, Mahal says. Mahal also says that Orton is afraid to face him like a man.

Suddenly, Randy Orton’s theme song kicks in. He doesn’t walk out, though, instead sneaking up from behind and delivering an RKO.

8:42 – Naomi defeats Tamina. Lana watches the match at ringside, and immediately after the match ends, she attacks Naomi.

8:35 – Backstage, Mojo Rawley thanks Shane McMahon for the opportunity to face Jinder Mahal last week. He says that the loss was devastating, but he says that part of him is glad that he lost because he knows that he can bounce back from defeat. Suddenly, Zack Ryder returns, saying that he’s back and that he and Mojo have some unfinished business.

8:33 – Backstage, Sami Zayn meets up with AJ Styles and Shinsuke Nakamura, wanting to strategize with them ahead of their tag team match. He rambles for a while, but AJ Styles thinks they’re good. Shinsuke says, “I like him.” AJ Styles says, “Of course you do.”

8:12 – The New Day and The Fashion Police defeat The Usos and The Colons. The match ends with Kofi Kingston pinning Jimmy Uso.

8:00 – The New Day enter, accompanied by a New Orleans band. They say they had to make a grand entrance because this is the home of next year’s WrestleMania. Kofi Kingston says that they’re going to defeat The Usos this Sunday at Money in the Bank and walk into WrestleMania 34 as the SmackDown Tag Team Champions.