Blumstein won by wearing down Ott. The closest Ott got was when he had 128 million in chips to Blumstein’s 240 million, but it was all Blumstein from there.

Blumstein’s winning-hand came on hand number 246 of the Main Event final table. Blumstein, with A-2, put Ott all-in with A-8 suited. The flop and turn came J 6 5 7. Blumstein hit a 2 on the river to win and take home the WSOP Main Event bracelet.

Board runs out KdJs3d4c6s (cont)

Ben Lamb was eliminated in 9th place after beginning Day 1 as the short-stack. He briefly moved up to 8th place, before going all-in with A-9 suited against Jack Sinclair’s A-Q. Sinclair’s hand held up, knocking Lamb out. Lamb took home $1 million for his finish.

On the 4th hand of the #WSOPMainEvent final table, Ben Lamb is eliminated in 9th place for $1,000,000. Jack Sinclair's AQ bests Lamb's A9

Sinclair was next to be eliminated. Sinclair shoved with K-J and was called by Brian Piccioli and his pocket aces. The aces held, knocking Sinclair out in 8th place. Sinclair took home $1.2 million for his finish.

Jack Sinclair finishes 8th for $1.2m when his shove with K-J is called by Bryan Piccioli's AA. (Credit @PokerPhotoArciv) pic.twitter.com/FI6VRl6vCb

Salas was the first to be eliminated on Day 2 when Ott rivered a 6-high straight to beat Salas’ pair of aces. Salas’ 7th place finish was good for $1.4 million.

On a J-7-6-4-J board, Scott Blumstein put Antoine Saout all in. Saout called with K-J, but Blumstein had 5-3 for a straight. Saout earns $2M

One of the 2017 Main Event’s favorite players, John Hesp was the last person eliminated on Day 2. Hesp shoved with 9-7 and was called by Pollack’s A-J. Pollack’s hand held, and Hesp was knocked out in 4th place, earning $2.6 million. 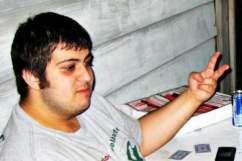