At #Cubs #Brewers game. #ChrisChristie was getting razzed by fans, so he got in the face of one of them. 5:30 on @WISN12News pic.twitter.com/sx8euMgFy2

Chris Christie was carrying his nachos back to his seat during the Chicago Cubs/Milwaukee Brewers game on Sunday night when he got into it with a Cubs fan. Christie apparently heard the fan make some comments at the ballpark, though it’s unclear what exactly the fan may have said that got such a reaction from the former presidential candidate. Nevertheless, Christie decided to confront the fan, bending down and getting right in the guy’s face.

Christie can be heard telling the Cubs’ fan, “you’re a big shot.” It appears as though the New Jersey governor says it twice before walking back to his seat. The fan responded, “appreciate that,” as others in the area can be heard laughing. Fortunately, for the internet, someone sitting in the same row as the Cubs fan was able to capture the exchange and posted the video online. The video has since gone viral.

Christie’s son, Andrew, works in the Brewers’ baseball operations department, according to CBS News. While Christie was in town, he decided to take in a game at Miller Park.

This certainly isn’t the first time that Christie has gotten himself in the paper at a ballgame. On July 18, Christie took in a Mets game at Citi Field. At one point during the game, he caught a foul ball. As his photo popped up on the big screen, the crowd erupted in very loud boos.

“The ovation quickly turned sour after Christie stood up and slapped hands with another fan. It didn’t matter that Christie gave the souvenir ball to a nearby kid. Christie was sitting in the third row, near the New York dugout. In the third inning, St. Louis rookie Paul DeJong lifted a high foul that bounced in the stands, and Christie reached out with his left hand and snagged it,” CBS News reported at the time. 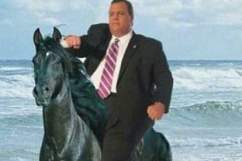