Getty Michael Phelps races against a shark tonight on Discovery.

Michael Phelps is racing a shark. Discovery Channel will be broadcasting the race tonight at 8 p.m. Eastern. The special, which is called Phelps vs. Shark: Great Gold vs. Great White, will last one hour and six minutes. While the race was already conducted, tonight will be the first time we get to see the footage.

Here are the details for tonight’s epic race between Phelps and a great white shark.

Odds: Vegas likes the shark’s chances at -550. (Odds are according to OddsShark and subject to change)

Race Preview: Michael Phelps raced a shark in a bizarre yet awesome contest to kick off Shark Week on the Discovery Channel. Phelps may be one of the best swimmers in history, but the odds are with the shark who can swim up to 25 miles per hour.

Despite Phelps desire to literally swim against a shark, the two were not in the water at the same time. Phelps will be competing against the shark’s time. Given Phelps swims six miles an hours, he was given a monofin to wear to help speed up his time.

While a shark can swim 25 mph, it is unlikely to keep that pace throughout the race. The race was a 100 meters to give Phelps a chance to use his stamina to his advantage.

“When we were in the cage, as soon as I first got in, I felt both sides of the cage kind of moving back and forth, and I was like ‘Oh my gosh, we’re really getting bit, the cage is shaking,'” Phelps told Good Morning America (via Rolling Stone). “They didn’t look that big underwater. I guess now seeing the video, they were pretty massive sharks. I had one, like I was saying, literally come right up to my nose, and it was crazy.” 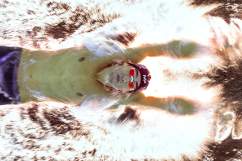