Getty Fans had to pay a premium price for Alabama-Florida State tickets.

It had been ten years since Florida State and Alabama played each other. Ticket prices reflected what many college football fans were viewing as a historic event. The game marked the highest ranked opponent a top-ranked college football team had opened the season with.

The demand only increased given it was the first meaningful football game in the new Mercedes-Benz Stadium. On gameday, fans looking for a last-minute deal were better off purchasing their tickets in the morning.

Just after 9 a.m. Eastern, the cheapest pair of tickets was going for $279 on StubHub. These were far from premium seats. The pair of tickets were in the 300 level, 29 rows up and behind the endzone.

With less than two hours before kickoff, tickets were even higher. According to StubHub, the least expensive ticket was $350. These seats were still in the upper level, but at least were in a sideline section.

Those wishing for better seats had to pay up. The cheapest pair of lower bowl seats on StubHub were $490 per ticket.

Part of the reason for the demand is tickets never really went on sale to the general public. According to AL.com, both schools quickly ran through their allotment. Face value tickets started at $125, but those tickets were snatched up months before the game.

Ticketmaster had no seats available, but sent customers to a partner site, Tickets Now. Less than two hours before kick, there was one standing room ticket listed for $99. This was the least expensive ticket we saw all day, but it did not come with a seat. The cheapest pair of tickets on Tickets Now was $381 for sixth row seats in the 300 level seats in a sideline section.

It will be interesting to see what the demand is like at the end of the season when the national title game is played at the stadium. Judging by these prices, fans whose team have championship aspirations may want to start saving up. 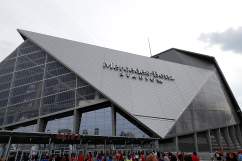