Getty Lance McCullers Jr. of the Houston Astros tags out Austin Romine of the New York Yankees as he atempts to score on a wild pitch in the fourth inning as hoke plate umpire Mark Wegner makes the call at Minute Maid Park on June 30 in Houston, Texas.

The New York Yankees are four victories away from another World Series appearance. They came back from a 2-0 deficit in the American League Divisional Series to defeat the Cleveland Indians, and did it in dramatic fashion.

The final victory of the series came Wednesday in Cleveland, and the Yankees got out of the gates hot and weathered the storm late to prevail, 5-2. They did it with the help of Didi Gregorius right away during the first inning. The 27-year-old shortstop started the game with a solo homer off Indians pitcher Corey Kluber, and blasted a two-run homer two innings later to put New York ahead, 3-0.

Game 5. Win or go home. Didi Gregorious does NOT want to go home.

As has been the story all season, Cleveland battled back to make it a game. They scored two runs on singles during the fifth inning to cut the lead to 3-2, but were silenced by the Yankees’ bullpen late. Then, the ninth inning came. New York added a couple of insurance runs during the frame to take a commanding lead, and left it up to Aroldis Chapman to close the game out.

The Yankees advanced to the ALCS for the 16th time — the most out of any franchise — and will play the Houston Astros in the best-of-seven seires. The Astros took care of the Boston Red Sox on Monday to advance to the ALCS for the first time ever after joining the AL in 2013. Before that, Houston was in the NLCS four times and played in the World Series once.

The Astros completed the regular season with a better record than the Yankees, and therefore hold home-field advantage for the series, which begins Friday.

The Astros won the head-to-head series during the regular season, winning five games and losing just two, but the two teams haven’t played each other since before the All-Star break on July 2.

Here’s a look at the schedule for the ALCS:

Yuli Gurriel of the Houston Astros hits a home run in the seventh inning against the New York Yankees at Minute Maid Park on July 2 in Houston, Texas.

Game #5: Astros at Yankees (if necessary)

Game #6: Yankees at Astros (if necessary)

Game #7: Yankees at Astros (if necessary) 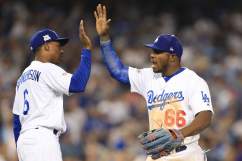 Dodgers Advance to the NLCS: Who & When Does Los Angeles Play Next?