Getty J.D. McKissic of the Seattle Seahawks rushes against the Minnesota Vikings at CenturyLink Field on August 18 in Seattle, Washington.

Seattle Seahawks running back J.D. McKissic had a breakthrough game against the Indianapolis Colts on Sunday.

With C.J. Prosise inactive with an ankle injury, the Seahawks called upon the 24-year-old practice squad player to make his debut. He definitely made the most of it.

McKissic impressed out of the backfield, using his quickness and shifty ability to find the end zone twice in the game. He finished with four carries for 38 yards and a touchdown and showed his receiving ability with a 27-yard touchdown catch late in the game.

Touchdown #Seahawks! J.D. McKissic scores to bring the score to 25-18. Can the #Colts come back? Bet now: https://t.co/Y25KhyjSna pic.twitter.com/SkspwBqnaI

In a standard scoring league, McKissic finished with 18.50 fantasy points, and he figures to be a solid option in Seattle’s offense moving forward.

Running back Chris Carson, who many predicted to be a fantasy threat this season, left the game during the fourth quarter after suffering a gruesome injury when his leg was folded up under two Colts players. His leg was put into an air cast, and he was carted off the field.

Carson’s injury status wasn’t immediately known, but it looks like he could definitely miss a few weeks. The injury comes after Prosise hurt his ankle in a Week 3 game, and he missed Sunday’s game because of it. Thomas Rawls was also inactive, but was a healthy scratch.

Sure, the Seahawks’ crowded backfield has just become even more crowded. But assuming Carson misses some time, McKissic is well worth the waiver wire pickup. That’s even considering Eddie Lacy will get some increased reps with the injury. The two players are totally different running backs, and McKissic’s pass-catching ability gives him a leg up on Lacy.

McKissic’s one catch was highlight-reel stuff, coming in between two Colts defenders. He has a high ceiling and virtual limitless potential for quarterback Russell Wilson.

Then there’s his running ability. With just four carries in the game, he didn’t get to showcase a lot of it, but his speed once he got along the edge makes him a matchup nightmare for many defenses.

McKissic signed an undrafted free agent deal with the Atlanta Falcons in 2016, and his first professional touch was good for a 101-yard kickoff return during the preseason against the Washington Redskins.

However, he failed to make the Falcons’ final roster and was subsequently signed to the practice squad the next day after clearing waivers. In December, he was promoted to the active roster, but was waived by the team three days later. Then, the Seahawks came calling.

Sunday’s game was his first-ever for the Seahawks. He played wide receiver at Arkansas State and finished his college career with 289 catches for 2,838 yards — a Sun Belt Conference record.

Seahawks coach Pete Carroll is also high on McKissic, saying he’s “been a guy who has been groomed to be in that spot” when asked about him filling Prosise’s role.

“J.D. McKissic is a running back that has been able to do all of those things,” Carroll told reporters about him filling Prosise’s shoes. “He’s got a real wide breadth of ability, and he’s looked really good when we have used him. So if C.J. isn’t able to go, we’ll see more of him.”

It looks like Carroll and the Seahawks found another viable player they intend to give more chances to moving forward, and fantasy owners should see that in McKissic, too. 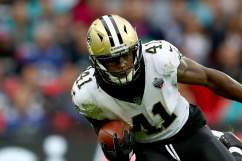