One of college football’s best out-of-conference rivalries writes its newest chapter on Saturday night, as No. 13 Notre Dame hosts No. 11 USC. It’s the 89th time these teams have met, and the 33rd time they’ve both been ranked for a matchup.

Kickoff is scheduled for 7:30 p.m. ET and will be broadcast nationally on NBC. If you don’t have cable or can’t get to a television, you can watch the game online for free via one of the following cable-free live-TV services if you’re in a select market:

DirecTV Now: NBC is included in all four of their channel packages. It’s live in select markets, including Los Angeles and Chicago

All of the above options include a free trial, so you can try them out and see if NBC is available in your market at no risk.

The last time these teams met when they both ranked inside the Top 15 in the country, we were blessed with this instant classic in 2005:

The Irish, favored by 4.5, have exceeded expectations thus far in 2017. After a one-point loss against Georgia back in early September, Brian Kelly’s squad has reeled off four wins in a row, including impressive road performances against Michigan State (38-18) and North Carolina (33-10).

USC, meanwhile, has sort of represented the antithesis of Notre Dame’s early season. A top-5 team coming into the country, the Trojans lost at Pullman and haven’t been nearly as dominant as expected in wins against Texas (27-24), Cal (30-20) and Utah (28-27).

Nevertheless, no matter how each team has gotten to this point, they both have just one loss, and the victor on Saturday night will remain squarely in the hunt for the College Football Playoff. 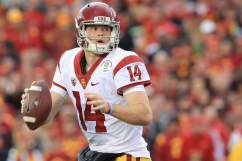 USC Football Live Stream: How to Watch Online Without Cable in 2017 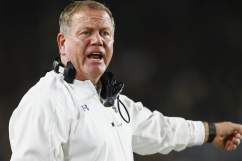 How to Watch Notre Dame Football Online Without Cable in 2017