For the first time in 11 years, Kurt Angle will wrestle inside of a WWE ring. The Monday Night RAW general manager will team with Dean Ambrose and Seth Rollins in a 5-on-3 handicap match against The Miz, Braun Strowman, Kane, Cesaro and Sheamus at TLC on Sunday. Angle’s addition to team with 2/3 of The Shield was announced Friday, as Roman Reigns was pulled from the card unexpectedly. The WWE also announced A.J. Styles would step in for Bray Wyatt and face Finn Balor.

So, why have the two been pulled from the PPV at the last minute?

According to Pro Wrestling Sheet’s Ryan Satin, viral meningitis has been working its way through the RAW locker room. While it hasn’t been confirmed that Wyatt and Reigns contracted the illness, they are out due to “medical reasons.”

In a statement to Sports Illustrated, the WWE confirmed that “three” of their performers were diagnosed with the meningitis.

“We have confirmed that three of our performers have been diagnosed with a viral infection,” WWE said in its statement. “As a precautionary measure, we are ensuring in-ring performers and staff are tested and immunized in accordance with recommended medical guidelines.”

On Wednesday, Justin LaBar the Pittsburgh Tribune-Review reported that Wyatt, Bo Dallas and JoJo have been out of action because of the illness.

Seems Bray, Bo and JoJo haven't been at TV or events because of viral meningitis. Unfortunate. I have NO INFO on Sunday for Bray.

According to the Centers for Disease Control and Prevention, it can take around 7-to-10 days to recover from viral meningitis.

Reigns had been part of a reunion storyline with The Shield heading into TLC. Angle’s much-anticipated addition to the match is his first time wrestling for WWE since 2006. Since the announcement, he’s expressed his excitement level of stepping through the ropes again.

#wweuniverse, be sure to tune in to my return to WWE action tomorrow, Sunday, at TLC. It's been 11 years and long overdue. I will proudly team up with Dean Ambrose and Seth Rollins, members of the notorious faction "The Shield". Couldn't be more excited. #itstrue

Satin said that when the creative team learned that Reigns and Wyatt may not be able to make it to TLC late in the week, they “came up with a plethora of replacement options, with Kurt Angle returning seemingly being the best one.”

The Balor against Wyatt match had been dubbed as “The Demon” versus “Sister Abigail” climax to their storyline. Balor had defeated Wyatt at SummerSlam and again at No Mercy. Instead, Balor will wrestle Styles, who he has a lot of history with in New Japan Pro Wrestling.

Styles expressed his excitement in stepping in for Wyatt in a video from South America. The Smackdown Live! star was there doing WWE Live! shows when the announcement was made, and he flew to Minneapolis for the PPV.

BREAKING: @ajstylesp1 responds to the news regarding his match with @finnbalor at #WWETLC!

Kevin Owens also left the South American tour for “personal reasons” and clarified that he wasn’t sick or hurt.

I’m not sick. I’m not hurt. My family needed me home. Thank you to @WWE & the fans in Argentina & Chile for their support and understanding.

TLC begins at 7 p.m. Eastern on Sunday and can be streamed on the WWE Network. 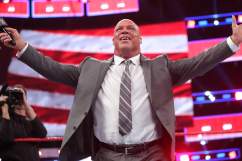