Getty Coach Jon Gruden of the Tampa Bay Buccaneers checks the scoreboard against the New Orleans Saints at Raymond James Stadium on November 30, 2008 in Tampa, Florida.

After an 0-6 start in the SEC, Tennessee announced Sunday that it’s fired head coach Butch Jones. According to Sports Illustrated, Jones is owed an $8.125 million buyout from the university.

The firing puts to bed a disappointing stint at the school for Jones, whose teams went a combined 34-27 through his five seasons. On Saturday, the last straw was dealt when Tennessee lost to Missouri, 50-17, and gave up 659 yards of total offense.

So, who is the lead candidate to replace Jones? As has long been speculated, the spotlight is put back onto Jon Gruden, former Super Bowl champion coach and current ESPN analyst.

But why Gruden, though? First, there’s some kind of connection between him and the school. Gruden’s wife, Cindy, is a former Tennessee cheerleader, and he worked at the school as a graduate assistant nearly 30 years ago before starting on his stellar coaching career.

Did you know Jon Gruden's wife Cindy is a former Tennessee cheerleader: pic.twitter.com/RgseMCQoOn

This also isn’t the first time Gruden’s name has been brought up as a coaching candidate. It seems like almost every time a coach gets fired, whether it be in the NFL or NCAA, Gruden’s name is thrown around in what have become known as “Grumors.”

When the Tennessee job opened up in 2008, he told the St. Petersburg Times that he wasn’t interested. He was the Buccaneers coach at the time and said that he wanted to be in the NFL his “whole life.”

“I’ve got a lot of respect for Tennessee,” Gruden said to the newspaper. “I grew up down there a little bit. My wife is from there. But this is where I want to be, and I can only make myself that clear.”

Then in 2010, Tennessee expressed interest in bringing in Gruden, but Sporting News reported that Gruden had turned down their advances. Two years later in 2012, Gruden’s agent claimed that his client never had any interest in the vacant Tennessee job and didn’t interview for the position that was vacant with the firing of Derek Dooley.

“I haven’t said anything (about the ongoing rumors) because there’s been nothing to say,” Gruden’s representative Bob LaMonte told The Knoxville News Sentinel. “This, to me, is just a fantasy world.”

So, with Gruden denying any chance to coach the Volunteers and leave the booth in the past, is this finally the year he goes back to college football and takes the job? It’s certainly not out of the question.

Recently, Gruden appeared on the Rich Eisen Show and addressed the possibility of him returning to coaching. Eisen didn’t mention the Tennessee job by name, but Gruden said he’d be open to talks.

“One of these days, who knows, Rich, one of these days you never know,” he said on the show. “But I’m just trying to hang on to the job I have. As you know, I don’t have a guaranteed contract.”

Jon Gruden is focused on #MondayNightFootball and the #FFCA but does he plan on ever getting back into coaching? LISTEN: pic.twitter.com/MoX1OfIE4R

Gruden also said he’s happy at ESPN and just wants to “keep doing what (he’s) doing,” adding that “if something comes along down the road, we’ll take a look at it.”

It would certainly take a lot for Gruden to leave the TV booth. In 2014, ESPN announced that it agreed to a contact extension with him which lasts through the 2021 NFL season. There’s that, and the amount of money that he makes at the sports network. USA Today reported in 2015 that Gruden is the highest paid on-air talent for ESPN, with a $6.5 million contract. His contract hasn’t been made public and most likely contains clauses if he decides he wants to return to coaching.

On November 10, though, it was reported that more “significant” layoffs were coming to ESPN, including some high-profile talent. Gruden’s name hasn’t been mentioned in regard to the layoffs, but if ESPN is looking to cut some money, they may take a look at his contract terms.

Then there’s the betting odds, which have taken a dip recently. The odds at Bet Online started to trend the wrong way earlier this week, but the odds of him taking the Vols job were listed at +250, meaning he’s still the heavy favorite to get the job.

It will certainly be interesting to see what happens from here on out in regard to Gruden and the vacant coaching position in Knoxville. 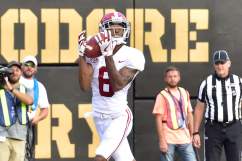