Getty With their dominant win against the Cowboys, the Eagles are in control of the NFC East.

For weeks, the Eagles-Cowboys Sunday Night Football showdown had been discussed as the game that would reveal the king of the NFC East. The Eagles took that crown, but showed on Sunday they have their eyes on a much bigger crown as the Eagles have now won eight straight games. Dallas had a 9-7 lead at halftime, but the Eagles offense we have seen all season showed up in the second half. Philadelphia rushed for 215 yards against the Cowboys, and rattled off 30 straight second half points.

Whether in Foxborough or Mexico City, the Patriots proved their game travels with their 33-8 drubbing of the Raiders. This is especially crucial as the Patriots are entering a road heavy portion of their schedule with three of their next four games on the road.

Just when you thought the Saints hot streak may be coming to a close, the Saints pulled out a late comeback to force overtime against the Redskins. According to NBC, Brees completed his final 11 passes in regulation. New Orleans would win in overtime to extend their win streak to eight. Drew Brees is known for operating a high-powered offense, and the Saints needed every bit of their passing game to catch the Redskins in the fourth quarter. However, for most of the season it has been the dynamic rushing duo of Mark Ingram and Alvin Kamara who have led the way for the Saints.

Here’s a look at our latest NFL power rankings.

GettyIt is all smiles for the Patriots, as New England appears to be hitting their stride at the right time.

The Eagles dominant performance against the Cowboys pushed their winning streak to eight games. Carson Wentz has been one of the best quarterbacks in the league, and a big reason the Eagles have had so much success this season. For all of Wentz’s great play this season, it was the Eagles rushing attack that led Philly to a dominant victory over the Cowboys.

Jay Ajayi had seven carries for 91 yards, including a 71-yard scamper. LeGarrette Blount had 13 carries for 57 yards. Corey Clement and Kenjon Barner also got in on the action by each scoring a touchdown. Their road win against the Cowboys is good preparation as the Eagles get ready for a road intensive stretch of their schedule with three of their next four games on the road.

Philadelphia is firmly in control of the NFC East with a commanding four-game lead on the Cowboys.

The Patriots put on a show for the fans in Mexico City as the offense was hitting on all cylinders. Tom Brady sliced up the Raiders defense for 339 yards and three touchdowns while completing 30-of-37 passes. Brandin Cooks was the biggest beneficiary with six receptions for 149 yards and a touchdown.

New England has won six straight games, but is entering an interesting stretch of their schedule. The Patriots come home after two straight road games then will go on the road for another three straight games. By the time Week 15 rolls around, the Patriots will have played five of their last six games on the road.

There had been questions about the Patriots defense to start the season, but the unit has tightened up. It’s no coincidence New England has held all their opponents to under 20 points while on their six game winning streak.

The Saints have now won eight straight games, and are the hottest team in the NFL. Historically, the Saints have been known for their high-powered passing game, but it is the Saints rushing attack that has the folks in NOLA talking about a deep playoff run. Running backs Mark Ingram and Alvin Kamara were a big reason the Saints were able to pull out an overtime win over the Redskins.

Ingram rushed for 134 yards and a touchdown while averaging 12.2 yards per carry against the Redskins. Kamara continued to display his ability to hurt defenses in both the run and pass game. Kamara had 75 receiving yards and a touchdown to go along with 42 rushing yards. The Rams are arguably the Saints biggest test since New Orleans began their winning streak.

The Viking put up a dominant performance against a Rams team that is also ranked in our top 10. Minnesota held the best offense in the league to just seven points, as the No. 5 ranked Vikings defense is giving up just 18.3 points per game.

The Vikings offense also contributed to the big win as Case Keenum completed 71 percent of his passes for 280 yards and a touchdown without throwing an interception. Latavius Murray rushed for 95 yards and two touchdowns.

Detroit is one of only two teams to beat the Vikings this season, and the Vikings will get a chance on Thanksgiving to avenge their Week 4 loss. It will not be easy as Matthew Stafford traditionally performs well on Thanksgiving, but the Vikings bring a five-game winning streak with them into Detroit.

The Rams explosive offense was shutdown against the Vikings. Jared Goff threw for just 225 yards and failed to throw a touchdown. Los Angeles rushed for less than 50 yards as a team as Todd Gurley only notched 37 yards, averaging a dismal 2.5 yards per carry.

L.A. had won four straight games prior to losing to the Vikings. The Rams are still one of the better teams in the league, and the offense will bounce back after a down week. Next week, the Rams have an opportunity to make a statement against a Saints team that is playing as well as any team in the league.

Don’t look now but the Jaguars sit all alone atop the AFC South, and have the third best record in the AFC. Jacksonville has adopted an old school mentality by relying on a crazy good defense and powerful run game to win games. Getting a win against the Browns may not seem like a big deal, but it is impressive any time a team from Florida beats a team in the snow by double-digits.

Leonard Fournette has taken the pressure off Blake Bortles, as Fournette rushed for his fourth 100 yard game this season. The Jaguars defense was dominant forcing five turnovers and five sacks against the Browns.

No. 8 Carolina Panthers
Last Week: Bye
Next Week: at Jets

The Panthers were on a bye week, but entered their week of rest on a high note. After losing two straight games, the Panthers rattled off three straight wins prior to their bye. Rookie Christian McCaffrey is starting to find the end zone with three touchdowns in the Panthers last two games. Given the Panthers traded Kelvin Benjamin, Carolina will need to rely on the rookie a bit more down the stretch as the Panthers look to continue their hot streak.

A big part of the Panthers recent success has been Cam Newton’s ability to punish teams with his legs. Newton has rushed for 181 yards the last two games, and the Panthers have an opportunity to keep rolling as they take on the Jets.

The Seahawks take on the Falcons on Monday Night Football in a pivotal NFC matchup. Seattle has won five of their last six games, but mounting injuries pose questions as to how far the Seahawks could go in the postseason. The Seahawks lost Richard Sherman for the season during their last game, and in recent days news broke that Kam Chancellor is also expected to miss the remainder of the season.

The Seahawks’ Legion of Boom was once the strength of the team, but now Seattle will be forced to rely on young talent in the secondary. Under Pete Carroll, the Seahawks have been vocal about their desire to run the ball, but this team has the worst rushing attack we have seen in the Carroll era. The backfield has been decimated by injuries, and Eddie Lacy has under-performed since Seattle signed him this off-season.

No. 10 Tennessee Titans
Last Week: Lost to Steelers 40-17
Next Week: at Colts

The Titans did not have their best outing on Thursday night against the Steelers, but are still in the hunt for the AFC South. The Titans sit one game back of the Jaguars, and the division could come down to a Week 17 matchup against Jacksonville. Prior to their recent loss, the Titans had won four straight games.

The Titans are entering a manageable part of their schedule with their next four games against teams in the bottom third of our power rankings. The only challenge is three of these next four games are on the road. 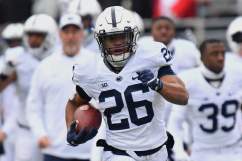