Getty Miami is likely to climb in the latest College Football Playoff rankings after their win over Notre Dame.

College football fans will have to wait a little longer tonight to see the latest playoff rankings. ESPN will be broadcasting the College Football Playoff rankings show live from Chicago at approximately 9 p.m. Eastern in between the Champions Classic college basketball games. The rankings will be unveiled at the conclusion of the Duke-Michigan State basketball game, so the timing of the rankings show is a bit fluid.

Once the first game ends, ESPN will do the live unveiling of the rankings prior to the Kentucky-Kansas game. Here’s how the ESPN press release described the abbreviated version of the show.

While it is less than ideal to have to wait a few more hours to see where your favorite team is ranked, you will get to watch some good basketball featuring two of the top teams in the country. This is a crucial week for the new rankings as four top 10 teams all lost.

The biggest story was an undefeated Georgia getting thrashed by Auburn. How far will the committee drop a one-loss Georgia team? Despite having two losses, I have Auburn ranked above Georgia in our latest projections below. The committee has shown they have no problem ranking teams with multiple losses highly if they have strong wins. The committee tends to prioritize a team playing at its best, rather than scrutinizing each team’s losses.

Miami thumped Notre Dame, and there is some thought the Hurricanes could top Alabama after the Crimson Tide narrowly pulled out a victory over Mississippi State. I still have Alabama above Miami in our projections, but the margin between the two teams is close. Based on the Sagarin strength of schedule rankings, Miami is ranked higher at 32nd than Alabama whose schedule ranks 49th.

Big 12 fans will be looking to see how high Oklahoma is ranked after defeating TCU. The Pac-12 is likely on the outside looking in for this year’s College Football Playoff after Washington suffered their second loss of the season. USC is the conference’s best hope, but the Trojans have a lot of ground to make up based on last week’s rankings.

Miami, Wisconsin and UCF are the only three remaining undefeated teams. Both Wisconsin and UCF have been publicly dinged by the committee for their strength of schedule. It will be worth watching how high either team climbs this week given the amount of upheaval in the top 25. As things stand now, UCF would represent the Group of Five in a New Year’s Six game.

Here’s my prediction for what we will see when the latest College Football Playoff rankings are unveiled. 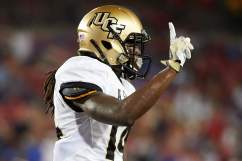