While millions of people across the globe tune in with anticipation see where their nation’s soccer team is grouped in the 2018 FIFA World Cup, a career-defining role will be playing out in front of their eyes.

Maria Komandnaya, a Russian sports journalist, is one of the hosts for the World Cup draw. Taking place December 1 at 10 a.m. Eastern, she’ll announced the pairings of the countries in the soccer tournament and will do it alongside Gary Lineker, a former English soccer player.

Me & @GaryLineker will conduct the Final Draw for @fifaworldcup_ru. So happy and excited! It's such a great honor for me! Thanks @FIFAcom! https://t.co/8XfHJHP6dz

Komandnaya has expressed her appreciation for being selected in the draw procedure frequently on her social media accounts.

1. Komandnaya Called Herself the ‘Happiest Girl in the World’ When She Found out She Was Selected to Host

Thank you, @fifaworldcup, for the magnificent Behind the scenes event! The Final Draw is coming!

When it was announced that Komandnaya was selected to present the draw alongside Lineker at the Kremlin State Palace in Moscow, she was overcome with emotion. She told RT in Russia that when she heard that FIFA was reviewing her candidacy to host, “it was a huge honor.”

“Nevertheless, I decided not to celebrate prematurely, while nothing was definitely decided,” she told the news outlet. “I had an interview, as the organization was obliged to review my level of English and how familiar I am with the footballing world. The very next day they sent me the contract!”

After finding out she’d been selected, she shared her excitement level with her Twitter followers, declaring herself as “the happiest girl in the world.”

Me & @GaryLineker will conduct the Final Draw for @fifaworldcup_ru. So happy and excited! It's such a great honor for me! Thanks @FIFAcom! https://t.co/8XfHJHP6dz

Komandnaya is adament that the exposure given to Russia with the World Cup is quite an opportunity, and she’s still shocked she will have such a prominent role in it.

“The World Cup in Russia is a chance to show the whole world what a fantastic country we have and what beautiful, hospitable people live in it,” she told RT. “Every football fan without exception will be following the draw ceremony. It is a real chance for us to make friends, no matter where you are from. Football unites. Football is a language the whole world speaks.”

2. Iranian Soccer Fans Have Urged Her to Not Wear Revealing Clothing During the Draw

Perhaps, it’s the most beautiful dress I’ve ever seen. @terekhovofficial is a pure genius. PS. And this is not the dress I’m going to wear for the final draw ?

While Komandnaya was beyond excited to earn the role as host, some weren’t that happy. She posted on her Instagram account about being the host, and several comments disparaged her clothing attire. Some asked her to show as little skin as possible on TV while making the draw, BBC reported.

“I am Iranian, our TV officials are very strict and censor your photos,” one comment on her profile said. “If possible, could you choose a dress for the ceremony which is suitable so that we can watch the programme?”

The comment was one of many from Iranian soccer fans who are worried they’ll miss some of the World Cup draw because of Iranian state TV, which is known for using recorded video footage during matches to make sure they don’t show women in the stands. BBC reported that if one of the hosts on the Olympics opening ceremony or the World Cup draw is wearing a dress, Iranian state TV often refuses to cover it.

For example, many parts of the 2014 World Cup draw ceremony were cut out because the Brazilian TV host was wearing clothing it deemed revealing.

“I urge you avoid to wearing a sexy dress during the draw so it is possible for us to watch the draw completely,” another comment on her post said. “We cannot watch when you wear revealing clothes.”

3. She’s Been Criticized on TV Before & Fired Back by Calling the Person a ‘Universal Idiot’

Прекрасный @smolovfedor_10 сразу после матча с Испанией — очень искренний и очень счастливый. Смотреть это видео, конечно, нужно до конца. Я вот смотрю и понимаю: когда после матча счастливы наши футболисты, это значит только одно — счастливы и все мы. Федя, повторяю, играй так всегда! // Fedor Smolov after the game against Spain. — I didn't score against Argentina, there was too much pressure. There was the atmosphere, the opening of the new stadium… We were tentative out there. But today, we played our game. It's also good that we managed to make the draw, even though there were two ridiculous penalties. They don't give them in the secondary league, but they give them when we are playing at home. — You performed so well in this game, because you want to play in La Liga, don't you? — It sounds more like a joke. Today the whole team played great and I, being a forward, scored two goals. I want to devote these goals to my father who had a birthday on November 12. — Thank you so much. Promise me to play like this all the time!

Komandnaya has been active in soccer in Russia for the past decade. She’s worked as a sideline reporter, often interviewing players and coaches.

In 2014, controversial figure and media member Igor Larin became the public relations head for Russia’s hockey team. Almost as expected, he issued a news release asking media members to avoid asking the team “distracting” questions during the 2014 World Championsips, such as players who may be sidelined for various reasons, reports said.

Sports journalists in Russia didn’t take well to Larin’s release, as many of them chimed in implying that the move was censorship. Larin appeared on TV after the tournament ended and criticized Komandnaya. She had questioned the importance of the hockey tournament, and he said that she was “telling the most charming, the most wonderful nonsense.”

Komandnaya responded on Twitter to Larin, referring to him as a “magical, unbelievable, universal idiot.” 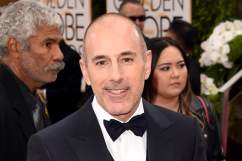 Matt Lauer’s Net Worth: 5 Fast Facts You Need to Know

4. She Once Commented on Vladimir Putin’s Propaganda Machine

Komandnaya has largely been favorable of her home country of Russia. But in a September 2016 investigative report by Vice Sports, she was quoted speaking about President Vladimir Putin and how his ban from the Paralympics is part of his propaganda. The ban came after investigators discovered a massive state-sponsored doping ring in the Olympics and Paralympics. Putin called the ruling “cynical” and “outside the bounds of law, morality and humanity.” He vowed to have a separate competition for banned Paralympic athletes.

“All other people with disabilities are still having a bad time,” she told the publication. “They cannot even leave their apartments.”

5. Komandnaya Works for Fox Sports & Covered the Confederations Cup as a Sideline Reporter

Komandnaya works as a journalist for the Russian TV station Rain and has been involved in several notable interviews with soccer players. She once interviewed an Iranian soccer player and joined him in a mosque wearing a hijab.

Sardar Azmoun interview with Maria KomandnayaThe biggest football star from the Middle East Sardar Azmoun talking about his life in Kazan', Russia. It was originally aired on November 3, 2017 on RT. View the original link: https://www.youtube.com/watch?v=oIEVSVmKroQ2017-11-18T16:07:50.000Z

She’s also appeared on several broadcasts of soccer not involving Russia. She was part of the broadcast team for Fox Sports in its coverage of The Confederations Cup earlier this year.

Numerous videos on her YouTube channel and other social media accounts show her conducting interviews, in addition to traveling across the globe.

Read More
Soccer, World Cup 2018
Maria Komandnaya is one of the presenters for the 2018 World Cup draw in Russia. Learn more about her and see photos of her.