Getty All indications are Scott Frost is headed to Nebraska.

Scott Frost has coached his last game at UCF per multiple reports. After months of rumors linking him to Nebraska, an official announcement is expected Sunday on his future. Sports Illustrated’s Bruce Feldman reported Nebraska Athletic Director Bill Moos is telling recruits Frost already has 90 percent of his staff in place, the majority of coaches coming from his current UCF staff. College football insider Brent McMurphy reported Frost had serious cold feet on leaving UCF, but ultimately decided to return to his alma mater.

SOURCE: #Nebraska AD calling recruits and telling them Scott Frost has 90% of his staff in place, and they will be pleased.

After the game, Frost said he had not told his players his future plans, but noted “I will.”

“They should give you time after the season to make decisions,” Frost said after UCF won the AAC. “They don’t. These things happen at the wrong time. The one thing I wasn’t going to do was sacrifice my commitment to this team. I’ve been game-planning and coaching, doing the best I can for these guys, then decisions land on you. They’re hard decisions.”

Frost declined to comment all week on reports he had agreed to terms with Nebraska prior to UCF’s AAC Championship matchup with Memphis. Frost took over a winless UCF team, and led the program to an undefeated season in just his second year in Orlando. During his two seasons at Nebraska, Frost threw for 2,677 passing yards and 18 touchdowns. He was the quarterback for the Cornhuskers during their 1997 national championship run, and is also a Nebraska native.

When Frost declined to meet with Florida representatives about the Gainesville vacancy, it became clear Lincoln was the front-runner to land Frost. As Oregon offensive coordinator, Frost had eyed the UCF opening as a prime location to run his version of the Oregon offense, turning down jobs from Power Five institutions like Syracuse and Maryland to take the UCF gig. However, the pull to turn around his alma mater lured him away from Orlando after just two seasons.

Bleacher Report’s Lars Anderson reported the contract is a seven year, $35 million deal. It remains to be seen who will coach UCF in the Knights bowl game.

Under Frost, UCF’s offense transformed to the third highest scoring unit in the country, and the Knights are headed to a New Year’s Six bowl game. Frost called this UCF season the “best year of my life.” Chants of “We Want Frost” and “Stay” rang out from the student section both during and after the game. The pull to return home was too much for Frost to turn down.

Frost was noticeably emotional during the post-game press conference.

Scott Frost fighting back tears as UCF players speak about what he's meant to the them . #ChargeOn #Nebraska pic.twitter.com/MoAfdTxFW7

Frost to Nebraska is the latest move in one of the busiest college football coaching carousels in recent memory. The moves have involved at least three Florida football teams with Dan Mullen heading to Florida, and Jimbo Fisher leaving Florida State for Texas A&M.

Click here to learn more about how Frost turned around UCF, and what Nebraska can expect from their new head coach.

Here are some video clips of Frost’s post-game press conference.

Scott Frost: "This has been fun…best year of my life." #UCF #ChargeOn pic.twitter.com/AaidGMIwv4

Scott Frost on whether he's told his players anything on his future: "I haven't but I will. #UCF #Nebraska pic.twitter.com/eTHEyfRMEC 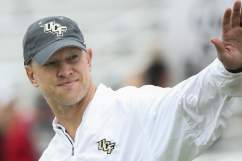 Scott Frost Made UCF the Coolest Team in College Football