Getty Tiger Woods of the United States reacts on the sixth green during the second round of the Hero World Challenge at Albany, Bahamas on December 1, 2017 in Nassau, Bahamas.

Tiger Woods said during his post-round interview Friday that he has a long way to go until he gets back to previous form. But if his play during the first two rounds of the Hero World Challenge in the Bahamas was any indication, he’s well on his way.

Woods carded a second-round four-under 68 to put him into a tie for fifth place heading into the weekend. He birdied three of his first four holes and stayed consistent the rest of his round at Albany Golf Course in New Providence, Bahamas. The second-round score comes after shooting a 69 in Thursday’s opening round.

This ended at 2feet from the hole. @TigerWoods masterclass. pic.twitter.com/GPqj86SO9A

“I proved the surgery was successful, the rehab has been fantastic,” Woods said to NBC Sports after his round Friday. “Now I’ve got a chance to go out there and play competitive golf again. I still have a long ways to go.”

Las Vegas is taking note of the emergence of Woods, too. He opened at 100-1 to win the tournament, and it shifted down to 50-1 prior to Thursday’s first round. After his first-round performance, that went to 25-1 and Friday’s front nine moved it to 15-1.

Woods’ last win came in 2013 at the World Golf Championships-Bridgestone Invitational. Since then, he’s made just 31 starts and hadn’t played in a tournament in nearly a year.

Charley Hoffman’s 63 during Friday’s round sets him up nicely for the weekend. He leads the field at -12 through two rounds after having 12 birdies Friday.

“It’s pretty special to be out here seeing Tiger making birdies and eagles,” Hoffman said to media members following his round. “Hopefully he’ll be in contention on Sunday.”

Jordan Spieth and Tommy Fleetwood are tied for second place heading into the weekend at -9 through the two rounds. Woods will be paired with Hideki Matsuyama on Saturday and is scheduled to tee off at 12:53 p.m. Eastern.

Check below to see the parings and tee times for Saturday’s Round 3: 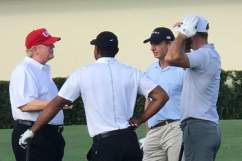 Read More
Golf, Tiger Woods
Tiger Woods heads into the weekend in good position at the Hero World Challenge in the Bahamas. Find out Woods' tee time for Round 3 on Saturday.