Instagram/Chris Long family The Long family is NFL royalty and now Chris is hoping to add another title run to the group's collective success.

Chris Long is much more than just a football legacy.

The Eagles veteran defender might have a famous last name on the gridiron, but it’s one he’s proud of and, more importantly, one that’s helped jumpstart him during his first season in Philly. Now the defensive end is hoping his family’s football-focus will get him back to another Super Bowl and some more bragging rights on Thanksgiving.

Here’s everything you need to know about the talented Longs and how Chris is doing them all proud:

1. His Father, Howie, Was Inducted into the Football Hall of Fame in 2000 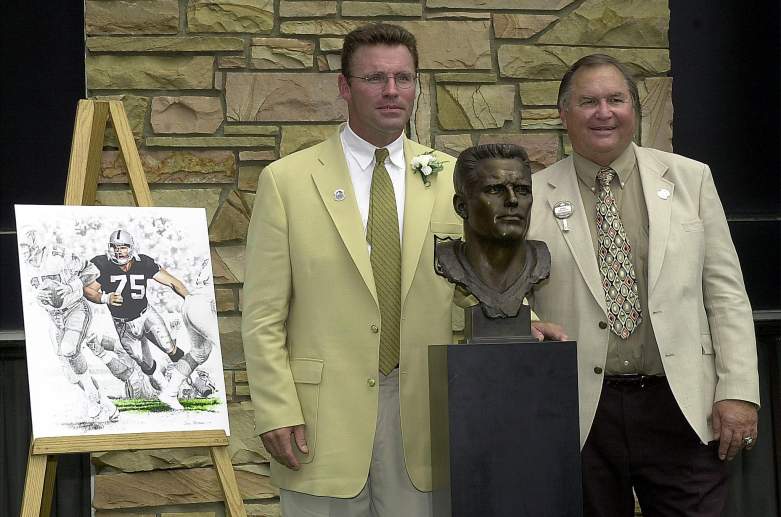 Howie was inducted in the Hall of Fame in 2000 and now works as an analyst on the FOX pre-game show. Although his own career was nothing short of incredible, he’s more than willing to put his accomplishments on the back-burner when his sons are concerned. In fact, Howie was quick to point out that he was a father first and foremost, particularly when Kyle was playing in the Super Bowl with the Patriots in 2017. He told media prior to the game:

I’m a dad first, no question…I couldn’t imagine someone wanting something more for someone. Because of who he is and how he’s handled himself and the road he’s been down to get here, it’s special. I’m excited for him. To have the opportunity to get in the batter’s box and take a swing, there are 30 other teams that would just die to have this opportunity and it’s a special, special time.

Now, as Long continues to settle in to life in Philadelphia and on the Eagles defensive line, he’s got his sights set on living up to his father’s name. He told NBCSports: “Listen, numbers don’t drive everything I do, but you certainly look at those numbers and you’re like, ‘Hey, I’d love to chase that.’ I’ll never beat my pops, he’s got the gold jacket, but if I can kind of inch closer, that’d be nice. At 32, you never take anything for granted.”

2. Long’s Wife, Megan, was a Star Lacrosse Player at Virginia

The Moorestown, New Jersey native was a two-time US Lacrosse All-American before taking her talents to the University of Virginia. She competed in a handful of big-time games, including the 2006 ACC championship game against Duke, which she said was “the best lacrosse game I have been a part of.” Megan started 16 games that season, leading all first-year players in scoring and was also named to the US National Developmental Team.

Athletics run in the family – Megan’s sister Katie played basketball at Johns Hopkins and her father played professional baseball with the Atlanta Braves.

Long is no stranger to social media. He boasts over 300,000 followers on Twitter alone and has been known to use the platform to express a handful of opinions. So, it only seems natural that Long would also announce some big-time personal news on social media as well.

Waylon James Long may get a few questions about his less-than-usual first name when he gets older, but there’s a good reason for it – his dad is a big-time fan of the legendary country group, The Highwaymen. His favorite member? Easy. Waylon Jennings.

Long told 101ESPN in 2015: “Easily. If I ranked them, it’s obviously Waylon…He’s my favorite. His music’s always had a special place in my life. And I just like his attitude. He’s just a guy you can identify with and he was a free spirit. He was the one guy I wish I could’ve met.”

4. Long’s Brother, Kyle, is an Offensive Lineman for the Bears

The middle Long brother, Kyle isn’t lacking for athletic talent. He was drafted by the Chicago White Sox in the 23rd round of the 2008 MLB Draft, but opted to head to Florida State for football instead. Kyle’s college road was bumpy – he left FSU for academic reasons after a 2009 DWI – and spent time at Saddleback College before heading to Oregon, where he rediscovered his game on the offensive line. He was drafted by the Bears in the first round of the 2013 NFL Draft.

Kyle, who strikes an imposing figure on the field at 6-foot-3, 316 pounds, has spent his entire career in Chicago, playing 65 games over the last five seasons. He started 64 of them.

It was a disappointing end to 2017, however, as Kyle was placed on injured reserve in Week 14 after suffering from ankle, finger and shoulder issues throughout the season. It came as a surprise when Kyle and the Bears announced the linemen was set to undergo neck surgery – an issue that was only discovered after he was shut down by the team. “He had a lot of things bothering him — his ankle, his shoulder, the neck was a little bit of an issue,” then-coach John Fox said. “We didn’t know the extent of it, but now we do, and it’s been repaired.”

There’s a long road to recover ahead, but Kyle remained optimistic after surgery, tweeting, “Crushed surgery today. Important procedure that will lead to much relief And success.”

5. His Mother, Diane, has Been Vocal Regarding NFL Player Safety

The Longs are a football family and while gridiron glory was, always, the goal, finding a few moments of calm wasn’t far behind. Enter family matriarch, Diane who, while her sons were growing up, drove a car with the license plate “3 Boy Zoo.”

The key for Diane, however, wasn’t perfection – it was safety. As the story goes, Chris was 11 years old and just starting Pop Warner when he started practicing his tackles on his younger brother Kyle. It didn’t take long for Diane to lay down a few house rules. She told her son if he kept up that behavior, he wouldn’t be allowed to play. He did and he wasn’t.

Not much has changed since those Pop Warner days and Diane has spoken several times about player safety, including a panel discussion at the Walter Payton Center, hosted by the Chicago Bears in 2014. The event discussed tackling techniques from Heads Up Football as well as playing in the heat, hydration and proper equipment.