Instagram/nathanwchen Nathan Chen comes from a tight-knit family who has been supportive throughout his career.

He’s ready for his Olympic moment.

Nathan Chen is one of the United States’ brightest athletic talents at this year’s Olympic games and while the 18-year-old figure skating star has his sights set on gold, he knows he wouldn’t be on the ice without the support of his family. It’s been a whirlwind so far, but Chen’s family hasn’t missed a moment and now, with the eyes of the world watching every single jump, he’s ready for the perfect landing.

Here’s everything you need to know about Chen and the support system behind him:

Chen, who grew up in Salt Lake City, Utah before his family moved to Los Angeles so he could train, comes from a tight-knit family and he’s the baby of the bunch. The decorated athlete has four older siblings, Alice, Janice, Tony and Colin, and he’s got his older brothers to thank for his interest in skating.

He first got on the ice when he was just three years old – after he saw his older brothers playing hockey. And it didn’t take long for Chen to realize he was exactly where he belonged. “I get a rush of adrenaline,” Chen told Parade Magazine. “I want to do it again and again. That definitively has made me super passionate about skating.”

Of course, while the siblings might have been competitive growing up, they’re now each other’s biggest fans, particularly when Chen takes his talents to PyeongChang in 2018. He’s got plenty of reason to be confident – fresh off gold-medal performances in the ISU Grand Prix Final and Four Continents Championships. He also became the first male in figure skating history to land five quadruple jumps in a single performance at the 2017 U.S. Figure Skating Championships.

2. His Parents Moved to the United States from China in 1998

A huuuuge #tbt to the fam bam?? #chenners

Chen’s parents were both born and raised in China and their experiences as immigrants have been the spark that drives Chen every time he steps onto the ice. He told ESPN:

There are a lot of cultural differences between Americans and Chinese, and I think that having both aspects be part of my life has helped me in a lot of ways, from an academic standpoint to an athletics standpoint. They came to the U.S. with not much, and it’s really inspirational to see how far they’ve come and how hard they worked for us. To be able to raise that many kids, and my dad was going to school at the time, just to listen to some of the stuff they’ve been through really motivates me.

Although Chen doesn’t remember his very first moment on the ice, his mother is quick to recount the memory, telling ESPN: “He din’t want to leave. He just stood there and cried and cried.”

Chen’s parents were supportive of every athletic choice he’s made over the last decade and a half and there have been plenty. He first wanted to be a hockey goalie before turning his attention to figure skating and also had plenty of interests off the ice, including ballet, gymnastics and playing piano.

3. Chen Credits His Mother, Hetty, For His On-Ice Success

And Chen is the first to admit – loudly and frequently, as often as he can – that his mother, Hetty Wang, is the reason he’s been able to do it all. He told AOL:

Hetty, who grew up in Beijing and works as a medical translator, was a constant in Chen’s childhood, particularly when he was forced to make the decision between school and skating. Chen attended public school up until ninth grade, but once he decided figure skating was something he wanted to pursue competitively, he was forced to change his schedule, turning to online schooling in order to make everything work.

It wasn’t an easy shift, he said it “didn’t really suit me,” but Hetty never let Chen forget the final goal or how important his education was.

“An athlete can only stay in a career for a very short time,” Hetty told ESPN. “Education can last a lifetime.”

4. Hetty Was a Huge Fan of Michelle Kwan 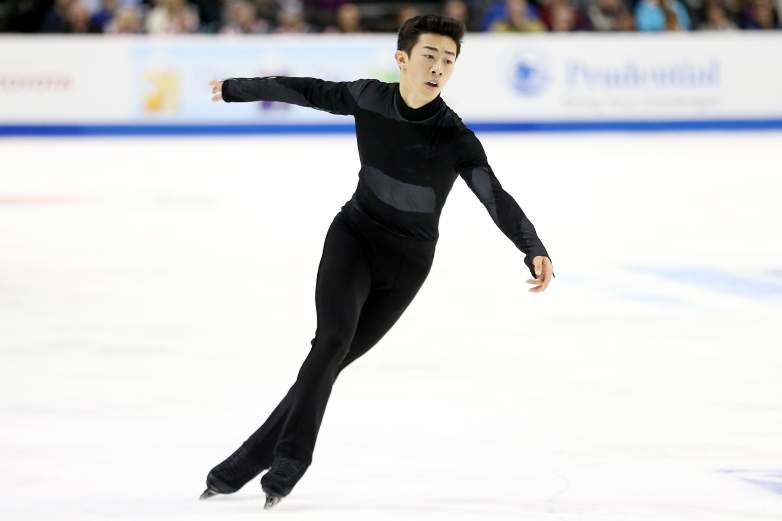 Although Chen and his family weren’t all that familiar with figure skating until he started competing in the sport, Hetty regularly watched Michelle Kwan and was a fan of the Olympian. In fact, Kwan served as one of Chen’s first role models in the sport and, when he first started skating, he was of the only males on the ice.

I think my parents felt us being a minority a little bit more than I did, and they tried to shelter me from that so I didn’t feel it at all. On the ice as a kid, I was the only male skater in a group of 50 girls. That was maybe the only thing I was self-conscious about. (But) as I got older, there were more and more Asian kids at competitions that I was going to – that felt cool to me.

Now, Chen is hoping to inspire a whole new generation of Asian-American fans. So far, so good. The 18-year-old will perform with Star’s on Ice after the PyeongChang games and is already part of the Kellogg’s Olympic campaign, quick to admit that seeing his face on a cereal box was a little surreal.

@kelloggsnyc is celebrating the Olympic Winter Games! Head there if you're in the area in February while I'm in PyeongChang #GetsMeStarted #TeamUSA #TeamKelloggs #ad

“I remember being a little kid walking down the grocery aisle seeing athletes on these cereal boxes,” Chen told Parade Magazine. “It’s crazy to think that 12 years later I’m on one of them.”

Chen’s father grew up in rural China before coming to the United States where he works as a medical research scientist. According to his LinkedIn profile, Zhidong currently works as the president of MultiTarget Pharmaceuticals LLC in Salt Lake City, a position he’s occupied for the last 13 years.

He also spent time as a senior scientist at Genta Incorporated and Salus Therapeuticals and boasts a Ph.D in Pharmaceutics & Pharmaceutical Chemistry from the University of Utah.

Zhidong’s resume is, naturally, jam-packed, but his recent focus has been on developing two aqueous solutions, AquaPreserve and AquaGenomic, which aid in biobanking, making it easier for doctors and scientists to preserve specimens and ensure their quality.

Although he’s not looking to step away from the ice any time soon, Chen has his sights set on attending medical school thanks, in large part, to his father’s work in the field.