Getty Steve Holcomb passed away at the age of 37.

Steve Holcomb was found dead in his bed at the Olympic Training Center in Lake Placid, New York on May 6, 2017. The former bobsled driver was just 37 years old. According to NBC Sports, a toxicology report revealed Holcomb had a significant amount of alcohol and sleeping aids in his system.

Holcomb’s blood-alcohol level was found to be 0.188, well above the threshold for intoxication. He also had more than the typical dosage of the sleeping aid Lunesta in his system, and the report indicated that combination was fatal for the bobsledder who was found in his bed at the Olympic Training Center in Lake Placid, N.Y., on May 6.

An initial autopsy last month showed that fluid in Holcomb’s lungs was a significant factor in his death, but no precise cause of death was revealed pending the toxicology report.

“We’re still in shock and struggling to come to terms with our loss,” Darrin Steele, USA Bobsled & Skeleton CEO, said in a statement. “The sliding community is a tight-knit family, and we lost one of our brothers. The outpouring of support from around the world has helped us begin the process of healing, but his absence will be felt for years to come.”

The Holcomb family noted in the same press release that they had preferred to keep the toxicology reports private.

Steven’s passing is a tragedy and we are devastated to lose him. Steven was an amazing son and brother who was loved and cherished by his family, his friends, the bobsled community and all the communities he touched around the world. We hold our memories of him close and are so proud of him, not only as an athlete but also as a person. He endeavored to be a role model to others, and to be a kind, considerate and loving man who will be dearly missed in this world. Anyone who knew Steven knew what a private person he was despite being a public figure. Our intentions were to continue to respect his privacy, even in death. We appreciate the outpouring of love and support from around the world.

Holcomb’s memory is still present at the 2018 Winter Olympics despite his passing.

Holcomb may not be physically present at the 2018 Winter Olympics, but his presence is felt by his former teammates as they remember his legacy while competing. Holcomb won three Olympic medals, and the U.S. bobsled team is looking to honor their former teammate by performing well in PyeongChang.

“We’re all suffering together,” Nick Cunningham, Holcomb’s former teammate, told Time. “And the best way to honor that legacy is to carry it on, to always be that threat on the hill, always put in that work and honor him by what we’re doing behind the scenes.”

U.S. coach Brian Shimer explained to Time that it has been a difficult time for the whole team.

“After the death of Steve Holcomb, I didn’t want to get in a sled,” Taylor told The Salt Lake Tribune. “So going a whole summer and not being sure if I even wanted to come back to the sport, you know, to be able to do this and have his legacy live on, it’s the least we could do and I’m honored.”

According to The Salt Lake Tribune, the team plans to wear bracelets with his nickname “Night Train” written on it. Holcomb’s mother, Jean Schaefer, traveled to South Korea to cheer on Holcomb’s teammates, and to honor her son.

“I have a huge feeling inside me accepting the fact that Steven isn’t here anymore,” Schaefer told The Salt Lake Tribune. “… I am here out of respect and to support those athletes that went the extra mile for Steven. I told them I’m going to there for you. I’m going to bring Steven’s spirit and energy to you.”

According to USA Today, Holcomb suffered from the eye disorder keratoconus, and had to have corrective surgery in 2008 to help save his vision. Holcomb created a foundation to help people with the same eye disorder who could not afford to have the surgery.

Through a foundation established in Holcomb’s name to fund the surgery for those who couldn’t afford it, more than 100 people were able to receive the Holcomb C3R procedure as an alternative to a corneal transplant, which is more invasive, has a longer recovery period and requires patients to take anti-rejection medication.

Those wishing to support the cause can visit www.givingvision.org for details on how to help. The site provides details on Holcomb’s passion towards helping people through the foundation.

Steven’s story has brought hope to many who face challenges with vision loss. He has raised awareness and given hope to that there is a way to save one’s sight when diagnosed with Keratoconus. Your challenges can be overcome and your dreams can be realized…Steven knew he had a purpose far beyond being an Olympic Athlete. This is the reason he partnered with the Giving Vision Foundation, to help provide resources to patients that otherwise could not afford treatment. Steven desired to leave a legacy far greater than his Olympic successes. 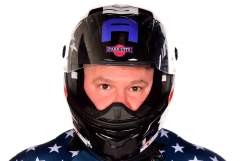