Todd Pletcher’s estimated net worth has not been reported online. One website called the-net-worth claims that he was worth approximately $280 million as of 2015, but that amount appears to be his overall lifetime earnings, not his actual net worth.

Based on the net worth of other horse trainers, such as Bob Baffert, it’s probable that Pletcher’s net worth is somewhere around $10 million, if not a little higher.

Pletcher has earned the majority of his money working as an American thoroughbred horse trainer. In addition to earning a yearly salary, he has had several champion horses over the course of his career, earning millions of dollars in purse money thanks to their success.

Pletcher owns a $2 million home in Long Island, New York, and spends a great deal of time with his family in Ocala, Florida, where he trains horses at a Pletcher family-owned and operated stable.

1. Horses Pletcher Trained Have Won Purses Totaling More Than $8 Million so far in 2018

Pletcher horses have already captured purses totaling $8 million in 2018, according to the trainer profile on horse racing database Equibase. Those earnings are spread across 327 starts on the year, averaging more than $25,000 for each. According to the earnings breakdown by year, Pletcher-trained horses have only averaged greater than $25,000 per start a single time, when they earned $25 million in 2013 across 946 starts, averaging $26,690.

So far, Pletcher horses have taken first place in 97 races in 2018. Four of those wins have come with purses of $1 million or greater on the line. Sixteen of those wins have been worth six figures ($100,000) or more. Magnum Moon, sitting at No. 1 on the Kentucky Derby leaderboard with 150 points, has captured more than $1 million in earnings, including the Grade II Stakes Rebel Derby ($900,000) and the Grade I Stakes Arkansas Derby ($1 million).

Magnum Moon’s owners, Robert and Lawana Low, won 60 percent of those guaranteed purses, which, in addition to the horse’s two other wins, adds up to nearly $1.2 million.

2. He Became the First Thoroughbred Conditioner to Top $300 Million

In September 2015, Pletcher became the first thoroughbred conditioner whose horses earned more than $300 million over his career. The achievement came after a Grade II race at Belmont Park when the horse he trained — Azar — finished in second place, according to the Courier-Journal.

Since then, Pletcher has earned millions more, keeping him high atop an elite group of millionaire horse trainers.

“I think [setting the record is] a product of inflation, to be honest, and I don’t think anybody is going to match Wayne’s accomplishments in this business. That said, it’s still a satisfying milestone for the team and a record to be proud of,” Pletcher said the year prior.

For comparison purposes, horse trainer Bob Baffert has seen his horses win more than $270 million over the course of his career, according to Equibase. This is about $85 million less than Pletcher horses have earned.

Pletcher currently has two Kentucky Derby wins under his belt. According to NBC Sports, a winning Derby Horse is awarded 62 percent of the final purse. Our of that money, the horse’s trainer gets 10 percent — which is the same amount of money that the horse’s jockey wins.

His first win at the Churchill Downs’ “fastest two minutes in sports” came in 2010. Super Saver, the product of stud Maria’s Mon and mare Supercharger, galloped to victory with jockey Calvin Borel spurring him along. While victory is always sweet, some are sweeter than others. Winning the 2010 Kentucky, according to The Spread, ended an 0-24 streak at Kentucky Derby races for Todd Pletcher Racing.

In 2018, Pletcher is hoping to add consecutive Kentucky Derby wins to his list of achievements, after nabbing his second win as a trainer in 2017. Front-running Always Dreaming, the favorite, took the lead at the half-mile post and never looked back, finishing with a 2 & 3/4 lead, according to the race’s official website.

Jockey John Velazquez also enjoyed his second Kentucky Derby win in 2017, having previously ridden to victory in 2011 aboard Animal Kingdom.

Todd Pletcher spends a great deal of time at the stable and on the horse track, but when he isn’t working, he is spending time with his family. Pletcher lives in Garden City, New York, with his wife, Tracy, and their three children, Payton, 19, Kyle 18, and Hannah, 15.

The Long Island home features four bedrooms and is just under 5,000 square feet. Pletcher purchased the home in 2006 for approximately $2 million, according to Zillow.

Pletcher is very close to both of his parents, Jerrie, his mom, and J.J., his dad, who divorced when he was young. Jerrie lives in Texas, where Pletcher spent his high school years, while J.J. lives in Ocala, Florida, with his wife, Joan.

Todd Pletcher spends a good deal of time in Florida, where his family owns a horse training facility, named after Todd’s son, Payton.

“J.J. and Joan own a racing stable of about 15 horses, all of which are trained by Todd. They also own Payton Training Center, named after their first grandson, an 80 acre private training facility in Ocala where they break and train about 100 per horses,” reads Joan Pletcher’s bio on her real estate website.

Todd Pletcher has a 40 percent stake in the facility, according to BloodHorse.

5. A Horse Named English Channel Has Won the Most Money

The Pletcher-trained English Channel has earned the most money for his owners. The horse was bought at auction by Todd Pletcher’s dad, J.J. Pletcher.

“JJ breaks many of the yearlings that Todd later trains; he was also instrumental in the selection at auction of one of his son’s Breeders’ Cup winners, English Channel, as well as More Than Ready, a grade I winner Pletcher trained to earn more than $1 million during his two seasons on the track,” according to BloodHorse.

English Channel came in first place 13 times out of 23 starts. He raced from 2004 through 2007 before he was retired from the track. According to Equibase, English Channel won $5,319,028 over the course of his career.

The next horse on the list, Ashado, is a mare, who earned $3.9 million. 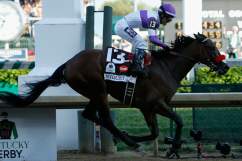