The 39-page lawsuit describes the sales department at WFAN as a frathouse-like workplace, with brawls between co-workers, alcohol flowing at corporate outings and events with potential clients, company-funded trips to strip clubs to try to win new business and rampant sexual harassment of women by superiors and colleagues. Lockwood claims in the lawsuit that the human resources department at WFAN ignored discrimination, harassment, drug use, alcohol use, gambling, workplace violence, workplace romantic relationships and affairs in violation of the company’s policies, with HR Director Margaret Marion creating an “anything goes” atmosphere, which Lockwood’s attorney called described with the terms, “wild west, ‘Mad Men,’ ‘Animal House,’ and sexist.”

Benigno, 64, has worked at WFAN since 1995 and is currently the host of “Joe & Evan” with Evan Roberts on weekdays from 10 a.m. to 1 p.m. He is accused in the lawsuit of making unwanted advances toward Lockwood and retaliating against her after she rebuffed him.

Lockwood’s attorney, Donna Clancy, of The Clancy Law Firm in New York City, did not immediately reply to a request for comment from Heavy. Benigno, Zuckerman and Argaman also could not be reached for comment. A spokesperson for Entercom, the parent company of WFAN and CBS Radio, told the New York Post the company does not comment on pending litigation, but said, “we do intend to defend the company vigorously.”

Benigno’s agent, Mark Lepselter, told the New York Daily News, “Joe categorically denies the allegations. My father once told me on any story, always consider the source and those who live in glass houses. We’re more than prepared to handle the situation if need be.”

Lockwood, a University of Michigan graduate and former Detroit Tigers intern who started working at CBS Radio in 2004 and began selling ads for WFAN and the Yankees Radio Network in New York City in 2012, is seeking $5 million in damages. She was fired in 2017 after being punched in the face while trying to break up a fight between two of her co-workers who were arguing over the Floyd Mayweather-Conor McGregor boxing match, according to the lawsuit.

You can read the full lawsuit at the bottom of this report. Here are some of the accusations made in the lawsuit:

Joe Benigno is accused in the lawsuit of making unwanted advances and sexual jokes and innuendos toward Lauren Lockwood in 2015 and 2016, when she was working on the same floor where his radio show is broadcasted from. Lockwood says that during commercial breaks, Benigno would come to her cubicle “to flirt with her and ask her personal questions.” He commented about her appearance, hair, jewelry and clothes, according to the lawsuit.

Lockwood also claims Benigno told him about his fantasies about the company’s HR director, saying he can picture her being “wild in bed” and “hanging upside down from the chandelier,” according to the lawsuit. She also says Benigno admitted to having an affair with an unnamed female sales assistant. Lockwood claims the affair was well known around the office for two years.

Benigno also “frequently gawked at female employees and rated them on their physical appearances,” Lockwood claims. He told Lockwood, besides her, another woman was his favorite because she was “gorgeous and cool,” and then said two others were also in his “top 3,” saying they are “beautiful,” and the “body” on one of the women, “oh God.”

Lockwood also claims Benigno “flirted” with various female employees, telling one of the women he likes some “meat on the bones” and telling her to “shake it.” According to the lawsuit:

Lockwood also says that Benigno created a “short dance video” for the radio station’s sales town hall meeting and he “chose his top rated female employees around the office to dance with him in the video.

Lockwood says when Benigno sexually harassed her, she rebuffed him, “turned red with embarrassment and felt extremely uncomfortable.” She also says in the lawsuit that she would have to leave her desk during commercial breaks. She said when Benigno did find her, his producer would have to repeatedly call him to get him back on the air.

An excerpt from the WFAN lawsuit.

Lockwood says in the lawsuit that after she rebuffed Benigno’s advances, he complained loudly to a coworker, “can’t even give her a compliment.”

She also says that she was taunted by her coworkers about it. According to the lawsuit, an unnamed male coworker sent her emails poking fun of Benigno by attaching photos of Anna Nicole Smith sitting on her 88-year-old husband’s lap.

Lockwood says the harassment stopped after Mark Zuckerman, her boss, spread rumors about her and another male coworker. Lockwood says Zuckerman and Benigno were known to be close friends. Lockwood says when she rebuffed Benigno, Zuckerman retaliated against her on his behalf.

An excerpt from the lawsuit.

Lockwood details the “Mad Men” culture in the sales department at WFAN in the lawsuit. She says CBS Radio “fostered a culture that permitted drinking alcohol in the office during work hours and at sporting events. Jameson Whiskey and pickle back shots were often the choice of alcohol and monies were given by the managers to the assistants to buy the liquor.”

She said in 2016 and 2017, male managers and sales executives, including her boss, Argaman, drank shots in the office on Fridays with their assistants. They also permitted alcohol to be served to employees and their clients at CBS Sports Radio events. Ad execs were given a budget for alcohol of about $2,000 per game if hosting clients, but more could be approved. Lockwood describes what she says happened in December 2015 on a party bus during a tailgate party at a Jets/Giants game:

Defendants chartered a luxury bus that was owned by another client to transport clients from their radio station to MetLife stadium. Plaintiff’s supervisor, Argaman traveled on the luxury bus with Defendants’ clients. The luxury bus was equipped with a stocked refrigerator containing alcohol for clients and employees attending the event. Tequila was served at 10:00 a.m. on the way over to the stadium and alcohol continued to be served once the clients and the employees entered the company suite for the Jets/Giants game.

At this event, one of Defendants’ clients was so intoxicated he fell down in the suite and later passed out on the bus ride home. During the rowdy event, the client damaged the bus by shattering a marble counter when opening a beer bottle. Defendants were made aware of the damages incurred by their client who owned the bus.

Lockwood says that when one of her colleagues hosted her clients at a Yankees game in her absence, she checked in with him to see how things were going. She claims he responded by saying one of the female guests wanted to, “suck his d*ck.”

Lockwood also says the radio station and her managers knew and permitted the practice of taking clients to strip clubs in hopes of bringing in new business. She said one of her coworkers took clients to a Yankees game and then a strip club. According to the lawsuit, he used Argaman’s business credit card to pay for the trip. He then told his coworkers the “sordid details” of the trip while hungover the next day and sought reimbursement for two prostitutes he says he bought, according to the lawsuit. Lockwood says Argaman’s reply was, “do you think we’ll get the business?”

Lockwood says Argaman would comment about her personal life, telling her once, “if you were a football player in the draft your pick would drop from 1st round to 8th round.” She also says Zuckerman spread a rumor that she and a coworker were spending time together and had been “fooling around” at the office. She says HR did nothing about the “false rumors.”

Lockwood also claims in the lawsuit that various employees were rumored or known to be having sexual relationships within the office.

Lockwood claims in the lawsuit that there was a “Bro’s Club” environment at her workplace, where male managers favored male employees over her and her female coworkers. She says males were given lower sales quota numbers, were assigned to more lucrative accounts, were given bigger expense accounts and were given access to things like the Yankees Legend Box on Opening Day to attract better clients.

Lockwood says in the lawsuit she was given a higher goal and was criticized more often by her bosses.

According to the lawsuit, Lockwood’s former employers interfered with her ability to find a new job. Lockwood says in the lawsuit that when she applied at another radio group, the prospective employer emailed CBS Radio to ask about her. She says her supervisor gave negative information that prevented her from being hired.

“Defendants’ defamation of Plaintiff and interference with her economic opportunities has adversely impacted her reputation in sports radio on a national level,” the lawsuit states. “In comparison, Defendants have protected and supported their male talent and radio personalities from adverse action and damage to reputation despite some having been brought up on criminal charges for misconduct.”

An excerpt from the lawsuit.

Lauren Lockwood says she was fired after an incident on July 23, 2017, at a luxury suite at the Barclays Center in Brooklyn. She says in the lawsuit that she was attending a Mayweather/McGregor Hype Tour Boxing Match at the arena along with various employees and clients who were invited to the CBS Radio suite.

Lockwood says alcohol was brought into the suite and most, if not all, of the attendees were drinking. According to the lawsuit, she arrived with a former coworker about 7:30p.m. after work.

“While watching the boxing event, tensions rose and remarks were exchanged by male employees comparing the two boxers. An argument broke out between defendants’ male employee and one of their former employees which erupted into an altercation involving several males in the suite,” according to the lawsuit. “During the altercation, which was captured on video, (Lockwood) was struck in the face, pushed, knocked down and her arms held. She tried to break away, defend herself and help her former coworker, who was being assaulted in the suite by other male employees.”

Lockwood says she was called into a meeting the next day with Argaman and HR director Margaret Marion and was told she was being fired for inviting her former CBS Radio coworker into the suite and for acting “erratically.” Her boss told her she was being “held responsible for the entire drunken altercation in the suite.”

Lockwood claims she was fired without proper cause and without a proper investigation and without a review of the evidence, including the video. Lockwood says the video shows her being assaulted, with her arms held, and being knocked down while trying to defend herself as well as she could while being one of the only females in the suite among drunken male employees who were fighting.

Lockwood says none of the male employees involved in the brawl were disciplined.

You can read the full lawsuit here: 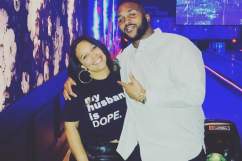