LeBron James’ I Promise School opens in his hometown of Akron, Ohio, today. The school, built in partnership with the LeBron James Family Foundation and Akron Public Schools, will serve Akron’s most at-risk youth to help give them the tools to have a successful future.

James tweeted about the opening, calling it one of the “greatest moments” of his life.

The jitters before the first day of school are real right now!!! Tomorrow is going to be one of the greatest moments (if not the greatest) of my life when we open the #IPROMISE School. This skinny kid from Akron who missed 83 days of school in the 4th grade had big dreams… https://t.co/PwmRaHRfng

Here’s what you need to know about the I Promise School:

1. I Promise School has a Unique Enrollment Process That Solely Focuses on Improving Student Performance

As part of the Akron Public School system, the I Promise School is in a unique situation. From the outside looking in, it looks like it has the resources of a lavish private school. But it’s public, and therefore has no tuition.

“Looking at reading data, we identified students who were a year, two years behind in reading,” said Keith Liechty of Akron Public Schools, who worked closely with James’ foundation.

This process identified more students than the school could fit in its first year. So, they randomly selected the student body and then asked parents if they’d like their students to attend the new school.

Each year until 2022, the school will add new grade levels. Next year, second and fifth graders will be added, and in 2022, the I Promise School will function as both an elementary and middle school, serving first through eighth graders.

2. The School Receives the Same Amount of State Funding as Other Public Schools, but It’s a Future-Thinking Commitment for Akron Public Schools

Akron Public School District Treasurer Ryan Pendleton told the Akron Beacon Journal that the I Promise School took “serious amounts of money” to get off the ground. While the school receives the exact same amount of funding as other schools within the district, the district is pouring approximately $2.9 million from its general fund for the 2018-19 school year.

As the school expands, the cost of operations will naturally go up. In 2023, the district thinks the school will cost them $8.1 million.

Akron Public Schools sees the I Promise School as a “long-term investment” that will benefit not just the kids going to the school, but others within the district. The school system expects to see smaller class sizes, increased enrollment, and better grades overall.

The district’s contributions don’t fully cover the costs to operate the school. Having an NBA superstar like LeBron James at the helm certainly has helped the school get off the ground. Contributions to the I Promise School from both local and national partners and foundation donates have eclipsed $2 million.

For example, The Peg Foundation, a Northeast Ohio initiative for mental health, is donating $2.5 million to the school mainly for support services over the next five years.

The funding was necessary to keep class sizes capped at 20, and to hire the 43 staffers that will help manage the school’s day-to-day activities. The I Promise School is a certified STEM school, and has a lengthier school calendar than normal. This year, the school calendar runs from July 30 to May 17. And there’s a seven-week summer school program for kids who need additional help. Each school day also runs from 9 a.m. to 5 p.m.

On top of that, all students will be provided breakfast, lunch, and a snack each day. School supplies are provided to students, and the faculty will have a fully stocked teacher’s lounge and workout area, including access to a personal trainer.

The building used for the school previously housed a closed school. LeBron’s foundation renovated the building extensively. Now, when you walk in, there’s a split staircase. Murals of James, Jackie Robinson, Jesse Owens, Martin Luther King Jr., and Muhammad Ali adorn the walls. And above the entrance, there are 114 James-worn basketball shoes. Upper Deck plans to sell the other half of each pair, and the proceeds will go towards additional school funds.

3.  The School has a Family Focus, With Support Geared Towards Everyone Involved in a Child’s Success

I Promise School officials and LeBron’s foundation want to assist not just at-risk youth, but their families as well.

“I think the missing link in public education is that family wraparound support,” principal Brandi Davis told the Los Angeles Times. “Because our students come to school and they’re worried about things at home. … We want to create that safe, that secure and that caring and loving environment for our families and our students so that our kids can focus on education.”

JPMorgan Chase & Co. will assist parents who earn their GEDs from the I Promise Too Program with volunteer mentors who will help guide them on their next steps. The mentorship program will be setup in the I Promise School’s family resource center down the line.

Support for adults of parents will extend to providing career counseling and job resources. The school will also be stocked with food bank donations that parents can access to cook for their families.

4. James Sees Himself When He Looks at the Students Who Will Attend the I Promise School

.@KingJames. More than an athlete. pic.twitter.com/aZGthMCEBv

In a video on his media platform Uninterrupted, James explained how he understands the struggle these under-privileged kids are facing.

I know these kids, basically more than they know themselves. I’ve walked these same streets. I’ve rode the same bikes on the streets they ride on. I went through the same emotions — the good, the bad, the adversity. Everything these kids are going through — the drugs, the violence, the guns, everything they’re going through as kids, I know. For me to be in a position where I have the resources, the finance, the people, the structure and the city around me — why not?

On Twitter, he said, “This skinny kid from Akron who missed 83 days of school in the 4th grade had big dreams…big dreams for the kids in Akron to give them everything they could need to find their passion, give back to our community and change the world! This school is that. The people are that. Akron is that.”

James attended Akron Public Schools for eight years as a kid, before attending St. Vincent-St.Mary High School (located down the road from I Promise School).

Executive director of the LeBron James Family Foundation Michele Campbell talked about James’ connection to Akron and his childhood as the driving force for starting the school.

“We all know which path he took. He took the right path with some very good people around him and now we know him as the world’s best basketball player. He could’ve taken the other road, and we would’ve never known LeBron James. He would’ve been a statistic like a lot of students who drop out of school,” she told USA Today. “Every one of these kids, maybe they don’t become LeBron James on the basketball court, but they become the LeBron James of their passion and dream in life.”

5. Before the I Promise School, James’ Foundation Started an Initiative to Send More Than 1,000 Kids to College

The idea for the I Promise School is relatively new — James’ foundation started working on it in November 2017 — but his dedication towards helping the community of Akron dates back to 2011. In 2011, he started the I Promise initiative, a plan to decrease dropout rates across Akron Public Schools.

Since then, the foundation has offered resources and support to Akron Public School children each year. The “Wheels of Education” program kicked off the same year as the I Promise initiative. It provides school supplies, computer access, and a support system intended to help students succeed in school and have a bright future.

In 2015, James announced that all kids under the umbrella of his I Promise program, which now includes 1,300 students, would receive a free college education. James partnered with the University of Akron, who will provide a guaranteed four-year scholarship to I Promise members. The foundation dedicated more than $41 million to make it happen. 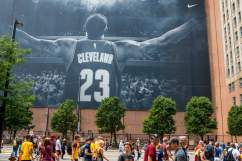