Carlos Thompson became one of the stars of Last Chance U Season 3, and now the wide receiver is headed for bigger things. As a brief reminder, please do not read further if you do not want to see any spoilers for the current season.

As the docu-series shows at the end of the season, Thompson is heading to play at Missouri Western, one of the top Division II programs. Thompson just turned 23 years old, and noted on the documentary that he has already used up all of his DI eligibility. If he wanted to continue playing football, Thompson had to go down to a DII program. As noted on the show, Thompson’s mother spent $14,000 to get all of her son’s transcripts, and help him become eligible to play at Independence.

Thompson was initially a three-star recruit, and committed to play at Texas Tech. The Red Raiders were the only major offer for Thompson coming out high school, per 247 Sports. According to Sports Reference, Thompson appeared in three games at Texas Tech, and had five punt returns for 43 total yards. As 1340 the Fan notes, Thompson was part of a star-studded Texas Tech program in 2013 that included Davis Webb and Baker Mayfield.

“They gave me multiple chances and I couldn’t get it right,” Thompson said on Last Chance U (via 1340 the Fan).

Thompson had a solid season at Independence with 48 receptions for 544 yards and three touchdowns. The show documented Thompson’s attitude change and his transformation into being a quality teammate. Last Chance U showed Thompson as one of the players that transformed the most during the season.

Missouri Western was one of several schools shown recruiting players in Last Chance U. Coach Matt Williamson spoke with the Daily Star Journal about the exposure the show gave to the school.

“It’s obviously great exposure obviously for the MIAA and for us as well to, but the biggest thing is with where we are at, we are going to recruit the best players and the best athletes,” Williamson explained to the Daily Star Journal.

The show mentioned several times how impressive the facilities are at Missouri Western. The school is hosting the Kansas City Chiefs 2018 training camp, and the team helped design Missouri Western’s locker room. The school boasts a $10.3 million indoor sports complex.

On July 21, 2010, the Griffon Indoor Sports Complex was completed and officially opened. The facility serves Griffon football, softball, baseball, soccer, men’s golf and women’s golf teams, and is the summer training camp home of the Kansas City Chiefs. The facility features a full 100-yard turf indoor field, a state-of-the-art locker room for the Griffon football team, which can accommodate up to 120 players, as well as coaches offices, a dedicated weight training facility for Griffon student-athletes, meeting rooms, a 120 seat theatre, equipment room and athletic training room. The facilities available to Griffon student-athletes rival those of any collegiate or professional sports organization.

Total cost of the building portion of the Griffon Indoor Sports Complex was $10.3 million.

The school also has a $2.6 million video board, per Missouri Western athletics.

In November of 2014, the announcement of planned renovations to the stadium was made. An estimated $7.8 million in improvements are planned to be complete by the fall of 2015. In August of 2015, the announcement of a $2.6 million video board was made. The 2,500 square foot display will be the largest in NCAA Division II and was made possible by the largest individual gift in MWSU Athletics history. Steve Craig donated $1.1 million toward the project and became the namesake of Craig Field at Spratt Memorial Stadium.

The stadium is named in memory of avid Griffon supporter Eliiot “Bub” Spratt and was constructed at a total cost of $850,000. Lights were added to the facility in 1985 as the Griffons defeated Missouri-Rolla 24-15 on September 4, 1985. 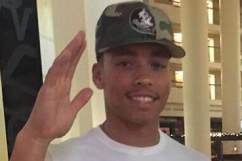