Malik Henry’s ups and downs over his college career were well-documented during Last Chance U. After watching the show, many fans were left wondering what exactly happened at Florida State when Henry was there in his short stint in Tallahassee. We’re going to look back at Henry’s time at FSU, but there might be some small spoilers ahead if you have not finished watching Season 3.

Henry transferred to Independence from Florida State after the short marriage did not work out as expected. Henry made the announcement on December 12, 2016 in a statement made to Noles 247 Sports.

I have decided to transfer from Florida State University. I want to thank Coach Fisher and his staff for giving me the opportunity to be a student athlete at FSU. I wish him and the team nothing but success. At this time I don’t know what University I will be attending in the future.

While the statement was released after the season, all indications are the transfer was in the works for several weeks before the season ended. There is no indication that Henry was kicked off the team, and Henry made the decision after losing a quarterback competition to Deondre Francois.

Both players entered Florida State as two of the top quarterbacks in the country, but the competition never really got off the ground after Henry was suspended from the team during camp for a violation of team rules. After the transfer announcement, former Florida State head coach Jimbo Fisher (now at Texas A&M) admitted the team was already preparing to move on from Henry.

“We’ve expected this for a while in our recruiting and we’ve planned for it,” Fisher told Rivals. “We wanted to keep Malik here. He’s an outstanding young man and I wish him nothing but the best. He’s a great young man. But we’ve had our plan and had it scheduled for a while.”

During Last Chance U, Henry did not elaborate on why he left Florida State, but did point to his battle with depression as a contributing factor into things not working out. Henry admitted to not being his best self in Tallahassee. Henry ended up transferring to Independence where he did not have to sit out a year before playing like he would have had to at another Division I program. As of now, it looks like Henry is still searching for offers to play at another school. Henry ended up transferring from Florida State without playing a down for the Seminoles, but did play in the spring game.

Here’s how Henry was described in his Seminoles bio that is still on the Florida State athletics website.

One of the top passers in the 2016 class, committed to the Seminoles in November 2014 and never wavered…a consensus four-star recruit that is rated as one of the nation’s Top 60 prospects by ESPN, Rivals and 247Sports…coming off an outstanding performance in the Under Armour All-America Game in January (2016) where he completed 9-of-12 passes for 75 yards and two touchdowns while leading Team Highlight to a 27-0 victory…played his sophomore and junior years at Westlake Oaks Christian (Calif.) before finishing his prep career at Long Beach Poly in the fall of 2015…threw for 1,410 yards, 16 touchdowns and just one interception over seven games during his senior year…tabbed the No. 2 dual-threat quarterback in the nation, No. 1 player from California and No. 17 overall prospect by ESPN…rated the nation’s No. 2 dual-threat signal-caller, No. 7 player in California and No. 34 overall recruit by Rivals…ranked No. 4 pro-style quarterback, No. 8 player in California and No. 53 player overall by 247Sports…competed in Nike’s Elite 11 quarterback camp in the summer of 2015, coached by former Super Bowl-winning quarterback Trent Dilfer… chose Florida State over several offers, including Southern Cal, Arizona State, and UCLA…born on July 7, 1998…majoring in media and communication studies. 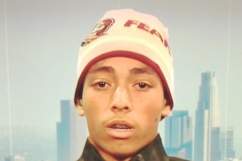