Dabo Swinney and wife Kathleen Swinney are Alabama alums, but now spend their days as the Crimson Tide’s nemesis. Alabama and Clemson have played four straight seasons in the College Football Playoff. Dabo and Kathleen have played a big role in this new rivalry as the head coach resurrected the Clemson program.

“I just love the players,” Kathleen told the Greenville News. “You just can’t help but love a frightened, and excited, 18-year-old who comes to school to play football…There were times when Dabo would get on them, and I’d just be mortified at it. I’d tell them after practice, ‘I’m so sorry he yelled at you.’ And they would tell me, ‘It’s OK Mrs. Swinney. It’s our fault. That’s what coaches have to do.'”

Dabo spoke to ESPN about what it was like growing up an Alabama fan.

“My dad was the biggest Alabama fan ever, and I was brainwashed,” Swinney explained to ESPN. “In Alabama, when you come out of the hospital, they have to stamp your birth certificate with either Alabama or Auburn, or you don’t leave.”

According to The Post and Courier the couple have known each other since early elementary school in Birmingham, Alabama. It was not until they were both attending Pelham High School that they started dating.

“We always kind of liked each other and when I was old enough to date in high school, we did,” Kathleen told Greenville Online.

The coupled ended up attending the University of Alabama together. 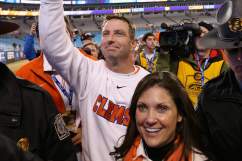 2. The Swinneys Have 3 Children, Including Their Son Will Who Plays For His Dad at Clemson

The couple has three sons, Clay, Drew and Will, who all played football at their schools. Will now plays under his father at Clemson.

“When we say Clemson is family, we mean it,” Will told the Orlando Sentinel. “This is something I’ve thought about since I first wanted to come to Clemson.”

Aside from raising her own children, Kathleen is actively involved with the Clemson players and their families.

“My boys bleed orange. This is where they’ve been raised,” Kathleen recently told Fox Carolina.

“It’s not just us; even all the players she’s keeping up with and bringing them goodies every week,” Will Swinney told The Post and Courier prior to joining the program. “She’s always making something for someone and keeping with us three. My dad’s always on the road, so she does a great job.”

3. She Lost Her Sister, Lisa, to Cancer

Dabo Swinney Introduces His Son, Will As 2017 Recruit | ACC Must See MomentDabo Swinney had the unique honor of getting to introduce his son as part of Clemson's 2017 recruiting class. Listen to what the National Championship winning head coach had to say about getting to welcome his son to the Tiger football family right here. This video was provided courtesy of Clemsontigers.com. SUBSCRIBE: http://bit.ly/Oqg3iE The Atlantic…2017-02-01T16:34:55.000Z

Lisa Lamb, Kathleen’s sister, battled cancer throughout her life. According to ESPN, she was pronounced cancer-free in 2003 after battling the disease. However, in 2009 the cancer returned but this time it had reached her brain and lungs. In April 2011, Lisa died from the effects of the disease.

The experience caused Kathleen to go to a genetic counselor to see if she carried the disease. She found out she did possess the same gene her sister had which meant there was a ninety percent chance she would end up with breast cancer at some point in her life.

Dabo and Kathleen Swinney on What Makes the State of South Carolina SpecialSouth Carolina is famous for world-class golf courses and breathtaking beaches, but it's also the birthplace of barbecue and home to 47 incredible state parks full of mountains, waterfalls and more—perfect for unforgettable, off-the-beaten-path experiences. We sat down with Dabo Swinney, head football coach of the Clemson Tigers, and his wife, Kathleen, to learn what…2013-09-26T15:41:18.000Z

After attending the same high school together, the couple decided to attend Alabama. According to Greenville Online, Kathleen’s undergraduate degree was in elementary education while Dabo studied business administration. Dabo walked on to the Alabama football team. They both ended up continuing their graduate education at Alabama.

After Dabo finished playing for the Crimson Tide, he stayed on as a graduate assistant for the football team. Kathleen earned her master’s degree in education. Dabo began his career as a coach while Kathleen taught elementary school.

Dabo Swinney on how his family has shaped his careerClemson head coach Dabo Swinney talks about raising a family as a college head coach and discusses the moment he almost gave up coaching.2017-12-30T19:30:28.000Z

Dabo and Kathleen donated $1 million to Clemson athletics in 2016 as part of the IPTAY initiative which focused on a number of football-related building projects.

“I love Clemson, I love our community, I love the state of South Carolina, and I love the players I’ve had the privilege of coaching,” Dabo explained to the Greenville News. “Kathleen and I are blessed, and we have always known we need to use those blessings to do good for others. It’s so important to us that we give back to this program that has been so good to us.”

They also started the All In foundation which focuses on breast cancer research. According to the foundation’s website, the objective is to “raise funds annually for breast cancer prevention and research with an emphasis on local university research programs, and efforts providing medical screening/testing to local upstate residents.”

Kathleen was motivated by seeing her sister battle cancer.

Read More
Clemson, College Football, Football
Dabo Swinney and wife, Kathleen Swinney, are high school sweethearts who even attended the University of Alabama together. Learn more about the Clemson couple.