Pete Carroll and his Seattle Seahawks are in Dallas, Texas, to face the Cowboys in the NFL Wild Card round. The Seahawks went 10-6 during the regular season to earn a wild card berth in the 2019 playoffs; the Los Angeles Rams led the NFC West, thanks to two close finishes in their head-to-head matchups.

Carroll has the support of his wife, Glena, whom he married in 1976. The couple has three grown children together.

1. She Met Pete in College 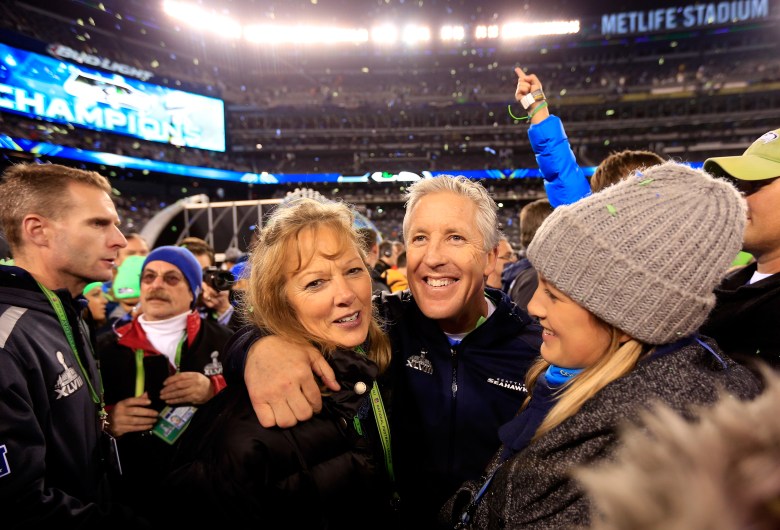 Carroll met Glena Goranson in college; they both attended the University of the Pacific. While there, Carroll played football and his now-wife played indoor volleyball. The two married in 1976.

Over the years, Pete Carroll has shielded his family from the spotlight and generally declines to speak about them in interviews. For this reason, there isn’t much to learn about Carroll’s wife or their kids outside of public information regarding their schooling and respective careers.

“All these years, I’ve done everything I can to not talk about my family,” Carroll told SeattlePI in 2010.

In 2009, Carroll was accused of cheating on his wife with a USC grad student. According to the Huffington Post, the rumors were started after Charlie Weis made some comments that were “taken out of context.”

“It’s untrue, it’s irresponsible, and it’s incredible he’d be talking about me like that,” Carroll said of Weis. Nothing came from the rumors, which has no other source of information outside of Weis’ comments.

Carroll was previously married to Wendy Pearl from 1973-1975. The two did not have any children together.

2. Her Son Brennan Is the Assistant Offensive Line Coach for the Seahawks & a Father of 1

He worked as a graduate assistant for his father with the USC football team. He stayed with the team for eight years. In 2010, he went to work at the University of Miami, where he served as a tight ends coach and recruiting coordinator. In 2013, he became the team’s wide receivers coach.

In 2015, Brennan was offered a job with the Seahawks.

“In Carroll’s first season in 2015, he aided the league’s third-ranked rushing attack (141.8 ypg) and fourth-ranked offense (378.6 ypg),” according to his bio on the Seahawks’ website.

Brennan and his wife, Amber, have a son named Dillon.

3. Her Daughter Jamie Graduated From the University of Southern California & Currently Serves as the President of Compete to Create

The Carroll’s daughter, Jaime, currently serves as the president of Compete to Create, a performance institute founded by her dad. According to her LinkedIn page, she helped “incubate and launch” the company in 2013.

“Formerly Win Forever Consulting, Compete to Create focuses on helping business leaders develop their mindset skills training to perform at their best, in work and at home. Having lived the philosophy, framework, and approach as the daughter of coach Pete Carroll, she is motivated to help people and companies be the best they can be,” her LinkedIn bio reads.

Jamie was a walk-on for the University of Southern California indoor volleyball team. She was a defensive specialist on the team. While at the school, she majored in communications and media studies.

Jamie is married to Mike Davern. The two tied the knot on July 6, 2012, in Hermosa Beach, California.

4. Her Son Nate Is Also on the Seahawks Staff

Loved getting to chat with @microsoft’s Satya Nadella about leadership & our refresh moments. Pumped about his new book #HitRefresh!

The Carroll’s youngest son, Nate, 31, has been on the Seahawks’ staff as long as his dad.

In 2010, he worked as a personnel assistant. In the summer of 2010, he moved to the coaching staff and gained the responsibilities of video study of opponents, self-scouting, playbook production and assisting offensive coordinator Darrell Bevell, according to his Seahawks bio.

In 2013, Nate became an offensive assistant for the team.

Like his sister, Nate attended the University of Southern California. He graduated with a degree in psychology. Although he didn’t play football in college, he played in high school.

He and his wife Anna are parents to one son.

5. She Used to Babysit for Lane Kiffin, Coach of Florida Atlantic University

Fairly early on in Pete Carroll’s coaching career, Glena supported her husband and even helped out whenever she could. Carroll worked alongside Monte Kiffin at the University of Arkansas. At the time, Glena offered to babysit for Kiffin’s son, according to Player Wives. Of course, that baby — Lane Kiffin — grew up to become a well-known football coach.