Gisele Bundchen, the Brazilian supermodel, is the wife of New England Patriots’ star quarterback, Tom Brady. She is also the mother of his two youngest children, and the stepmother to his oldest son. What some may not know is that Gisele is also a twin; in fact, she has five sisters.

Gisele and her brood with Tom are getting to enjoy another Super Bowl, as the Patriots take on the Los Angeles Rams on February 3, 2019. As for her twin sister, Patricia, Gisele wrote on Instagram: “Thank you for being always there for me, since the very beginning. I love you so much.” She is not shy about expressing love for her husband, Tom, on Instagram.

Wishing you all a Christmas filled with love ❤ Desejo a todos um Natal cheio de amor !

For those who think the genetic lottery can only strike once, consider this: Gisele Bundchen has a fraternal twin sister named Patricia. She has written tributes to her twin on Instagram. “Happy birthday super Pati! Thank you for being my best friend since the day we were born. Love you with all of my heart!!! #gratitude #twinsister #family #love,” she wrote. She wrote on a throwback photo, “Missing my partner in crime.”

Growing up, the sisters were in ballet and gymnastics together, according to Vanity Fair. Patricia was born five minutes after Gisele. They are actually among six sisters in all; the others are Raquel, Graziela, Gabriela, and Rafaela.

This is my favourite pic of Gisele and Patricia Bundchen GlamourMagUK #twins #sisters pic.twitter.com/c976QAXhrs

At age 13, both Gisele and her twin were enrolled in a modeling course by their parents, but only Gisele’s modeling career took off. Patricia is married, and she has helped Gisele with public statements over the years.

You can read more about Gisele’s twin here: 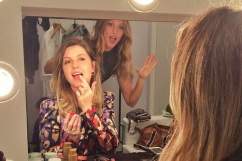 2. Gisele Says Her Daughter, Vivian, ‘Made My Heart Complete’

Gisele has one daughter, a girl named Vivian Lake with Tom Brady. Gisele Bundchen posted a tribute to her daughter Vivian on the girl’s 5th birthday. “Today is her day! 5 years ago our family was blessed with a little sunshine that made my heart complete. #infinitelove #forevergrateful #mygilrygirl ❤☀?,” she wrote on Instagram.

Gisele frequently writes about all of her children and her husband on social media.

There is nothing better than being with you. We miss you and love you so much! Happy Father's day!! ❤️❤️❤️Não há nada melhor do que estarmos com você. Estamos com saudades e te amamos muitos! #felizdiadospais

On Father’s Day, she wrote, after sharing a photo of Tom with the family, “there is nothing better than being with you. We miss you and love you so much! Happy Father’s day!”

3. Gisele Grew Up in Brazil to Parents of German Descent

Gisele posted a father’s day photo of her dad in which she wrote, “Happy Fathers Day! Thank you for always inspiring us to give our best. I love you!” On mother’s day, Gisele posted a similar throwback family photo and wrote, “Happy Mother’s Day to all! I want to honor and thank my mom and all the mothers for the love, dedication, patience and for the lessons only a mother can teach. I love you mom !”

Happy Mother's Day to all! I want to honor and thank my mom and all the mothers for the love, dedication, patience and for the lessons only a mother can teach. I love you mom ! ❤️ Feliz dia das mães! Quero homenagear e agradecer a minha mãe e todas as mães pelo amor, dedicação, paciência e pelas lições que só uma mãe pode ensinar. Eu te amo mãe!

In 2009, when she married Tom Brady, Gisele was featured in Vanity Fair Magazine. The magazine was reported that Gisele was “raised in a large Catholic family by parents who have been married for 37 years” at that time. She was drawn to Tom Brady’s family because they are also Catholic and his parents’ marriage has endured for decades, the magazine reported.

Gisele’s parents raised six daughters. According to Vanity Fair, Gisele grew up in Horizontina, “a small town in southern Brazil” without many amenities, and her parents are of German heritage. The magazine reports that her mother was a bank cashier, and her father worked construction and other jobs.

4. Gisele Also Has a Stepson, John & a Son, Benjamin

Gisele told Vanity Fair that she considers John, Tom Brady’s son with Bridget Moynahan, to be akin to her own child. “I understand that he has a mom, and I respect that, but to me it’s not like because somebody else delivered him, that’s not my child. I feel it is, 100 percent,” Gisele told Vanity Fair. “I want him to have a great relationship with his mom, because that’s important, but I love him the same way as if he were mine. I already feel like he’s my son, from the first day.”

She wrote on Instagram that her son, Benny, melts her heart.

The beginning of Gisele and Tom Brady’s relationship was complicated by the fact that Tom’s ex-girlfriend Bridget Moynahan announced she was pregnant with John; Bridget and Tom had already broken up when she discovered she was pregnant, but Tom was dating Gisele. She has admitted in interviews that the situation was a challenge, but the couple stuck it out. They would go on to have their own son, Benjamin, who is sometimes called Benny.

5. Gisele Is Close to Tom’s Family

So proud of this beautiful warrior! I love you so much sweet Galynn ???

Gisele has posted comments on Instagram that indicate a close relationship with her in-laws, especially Tom’s mother. Gisele has posted photos with Tom’s mother, Galynn Brady, who is a cancer survivor. “So proud of this beautiful warrior! I love you so much sweet Galynn ???,” she wrote. Galynn and her husband, Tom Brady Sr., have four children in all.

It was publicly revealed at Super Bowl 2017 that Galynn was dealing with cancer, but Tom’s mother has proven herself a fighter and is expected to be at his and Gisele’s side at Super Bowl 2018.