On Day One, offensive linemen, specialists and running backs will undergo medical examinations and interviews with various teams. Quarterbacks, wide receivers and tight ends will repeat this process the next day, and then defensive linemen and linebackers the day after that.

With that said, why does the NFL world revolve around Indianapolis every March? Since 1987, either the RCA Dome or Lucas Oil has hosted the combine.

It didn’t start there, so how did the combine end up in the Circle City 31 straight times (and counting)?

1. It Moved to Indy After Bouncing Between Several Locations

In the late 1970s, original Dallas Cowboy president Tex Schramm proposed the idea for the first organized scouting event for draft-eligible players. The inaugural event, then dubbed the National Invitation Combine, debuted in Tampa (Fla.) in 1982.

In 1984, the venue changed to New Orleans. Over the next two years, the location shifted to Arizona and then back to Louisiana. In 1987, National Football Scouting Inc. committed to Indianapolis, citing its “central location” and “domed stadium” (then the RCA Dome) as advantages.

Indy Carries a lot of Financial and Logistical Incentives 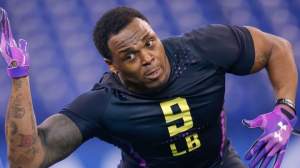 GettyIndiana linebacker Chris Covington (LB09) runs thru a drill during the NFL Scouting Combine at Lucas Oil Stadium on March 4, 2018 in Indianapolis, Indiana.

The real reason for Indianapolis’ appeal is that all parties involved appear financially invested in the combine staying there.

First, the local government. Visit Indy estimated in 2014 that the event generates nearly $6.5 million from around 4000 visitors that stay downtown.

“It’s not necessarily the quantity (of visitors),” Chris Gahl, a spokesman for Visit Indy, said to Indy Star at the time. “It’s the quality of individuals who’ll be visiting our city as part of the combine that makes this such an incredibly valuable event for Indianapolis.

“It enables us to show off the city to the NFL’s brass and each team and their ownership and head coaches and prospective players.”

National Football Scouting, Inc., still the negotiating partner for the combine, is also based locally. President Jeff Foster stated in 2018 that he “wouldn’t want to try to do it anywhere else.”

“I think everybody is really happy and really comfortable here in Indianapolis,” he said after reupping for the 2019 and 2020 combines. “I’m trying to make sure that everybody understands we’re not taking that for granted.’’

The Circle City is also home to IU Health, which serves as the medical partner for the NFL Combine. After 31 years, Foster stresses that the relationship takes care of several logistical issues.

“The only people who really know the logistics are our office and IU Health,” he said.” I feel like it’s my job to make sure I educate the people at the league office so they understand how challenging that would be.”

These advantages include portable MRI machines and a direct fiber-optic connection to local hospitals.

Lastly, player evaluators will push back against any relocation. Sports Illustrated’s Jacob Feldman relayed that “comparing drill times to previous results would be harder if the field changes.”

Who should your team be watching at this year's #NFLCombine? ?

Read More
Indianapolis, NFL
Will Kyler Murray follow in Baker Mayfield's footsteps again? What does Josh Jacobs need to do? The first answers come Tuesday with the start of the NFL Combine.