Getty Tiger Woods with caddie Joe LaCava during the 2019 Masters.

While the exact caddie payouts are typically undisclosed, we can use past data to get an idea of how much money Tiger Woods’ bag man Joe LaCava makes. According to Golfweek, a caddie earns five to 10 percent of a player’s winnings in addition to his salary.

Woods’ former caddie Steve Williams was reported to make more than $1 million per year when Woods was playing at his peak form. Woods made $5.4 million in earnings on the PGA Tour in 2018. Based on the going rate, LaCava made between $272,192 to $544,384 in bonuses from Woods’ earnings last year. According to Golf Week, caddies make between $1,800 to $2,000 in weekly salary during tournaments.

Being a caddie for one of the top golfers means a bit more financial stability, but the majority of caddies live with a lot of volatility. Most caddies cover their own travel expenses and can take a big hit financially if their golfer is struggling as Golfweek detailed.

Nowadays, a select few caddies can make seven figures in a single season on the PGA Tour thanks to bonuses and a cut of the massive prize purses. They also can go weeks on end struggling to break even after expenses.

The amount and manner in which caddies are compensated is one of the most frequently asked questions in golf. The answer is complicated, but there are some general guidelines most player-caddie relationships follow in some form.

By most accounts, the average weekly base pay for caddies on the PGA Tour runs in the neighborhood of $1,800-$2,000 per week. On the LPGA, it’s closer to $1,200. The majority of those funds go toward travel expenses, which are almost never covered outside of the weekly wage.

"We're buddies more than anything. He's the boss, and I work for him, but he doesn't treat me like that."@TigerWoods and Joe LaCava discuss their relationship, pro-am mishaps and the *one* thing Joe always forgets on the first tee – only on GOLFTV. pic.twitter.com/4JQEIVoMQY

LaCava was formerly the caddie for Fred Couples. One of the unique things about Couples is he did not use a glove, which has impacted LaCava’s work with Woods. LaCava admitted he sometimes forgets Woods’ glove after being used to working with Couples. Golf TV detailed the exchange.

“Well the must-dos that I still haven’t got used to after 8 years is having a fresh glove on the first tee. You know, you work for Fred [Couples] for 21 years with no glove, and Tiger’s looking at me on the first tee like ‘well….?’

As for their relationship, LaCava noted Woods feels more like a friend and less like a boss.

“We’re buddies more than anything,” LaCava told Golf TV. “He’s the boss, and I work for him, but he doesn’t treat me like that.”

LaCava also formerly caddied for Dustin Johnson. He had an opportunity to join another golfer in 2017 but opted to stick with Woods as he made his comeback. 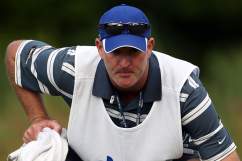