Drake may be the face of the Toronto Raptors, but he is not the owner. Maple Leaf Sports and Entertainment own the Raptors along with a number of Toronto professional sports franchises. Maple Leaf Sports also own the NHL’s Toronto Maple Leafs, MLS’s Toronto FC and CFL’s Toronto Argonauts. The company not only own the teams but the venues where they play as detailed on the company’s website.

MLSE owns or operates all of the venues its teams play and train in, including Scotiabank Arena, BMO Field, Coca-Cola Coliseum, MasterCard Centre for Hockey Excellence, BMO Training Ground and the Toronto Raptors Training Centre. MLSE also provides fans in Toronto incredible live music and entertainment events. MLSE strives to deliver championships to our city and our fans and bring the world to its feet.

As for Drake, he has a non-ownership role with the Raptors and was named the team’s Global Ambassador in 2013. Prior to the 2018-19 NBA season, Drake hinted at his desire to own the Raptors with an Instagram photo of himself standing in front of the Toronto logo with the caption “future owner.”

The Raptors and Drake announced an expanded partnership in 2018 with increased involvement of the rapper’s record label, OVO Sound. Raptors president Masai Ujiri called Drake the “King of Toronto” when the team announced their new partnership.

“We can’t do it any better than The King of Toronto,” Ujiri said, per NBA.com. “To have somebody special like this for us I think is huge. We appreciate all the support, all the support from the fans. We have to make Toronto – we have to – we have to make Toronto the best atmosphere in the NBA. And it’s becoming the best atmosphere in the NBA. I can’t wait to go to every single Raptors game, and we’re damn proud of it.”

Given the Raptors complicated ownership structure, it is understandable why some fans believe Drake is one of the owners. The rapper is often seen courtside during Raptors games and is doing his best to give the team a home court advantage. Drake has been caught talking trash to numerous Bucks players during the Eastern Conference Finals.

While Drake is not the owner of the Raptors, his ties to the team are real. The rapper even caused the franchise to get fined $25,000 in 2014 when he made comments about Kevin Durant’s free agency during a concert.

“I think the key is always to grow, the key is always to evolve,” Drake noted to NBA.com during the 2018 announcement. “It’s nice to have the uniforms and the fancy court and the merchandise and stuff like that, but what was most important to me was just the call to action. I think in this day and age it’s really easy to get on social media and talk about things we’d like to see change or things we think are wrong, and then there’s an opportunity when you’re presented with one to be able to do something about it.” 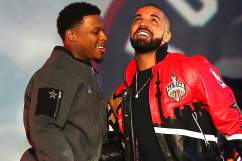