Hamilton came rolling through Charlotte and we were not throwing away our shot at seeing it! #Hamilton

Alyssa Naeher credits her twin sister, Amanda, for helping her soccer ascent to become the USA’s goalie. Alyssa’s first World Cup experience was a nod to her parents who surprised the 11-year-old sisters with tickets to a 1999 match in New Jersey.

“I was an 11-year-old kid going to the game with my sister and my parents,” Alyssa told Team USA. “I had no idea what to expect going into it, driving to the stadium and tailgating. The game was an incredible atmosphere. That’s what’s always stuck with me. … Never saw anything like it. I don’t think I stopped smiling for a week afterwards. It was a really fun day.”

Alyssa is originally from Stratford, England where she spent hours attempting to defend kicks from her sister. US Soccer detailed the twins’ bond and their love for soccer.

At Alyssa’s first soccer practice when she was four years old, she and her twin rushed out of the car—and Amanda, in her excitement, accidentally slammed Alyssa’s hand in the door. It turned black and blue, her nails falling off. As Alyssa screamed in pain, Amanda consoled her and said, “Good thing you don’t use your hands in soccer.” This proved to be the most un-prophetic statement ever—as Alyssa would go on to play the one position that does rely on your hands.

Amanda, conveniently, became a forward. That resulted in the two sisters out in the yard for hours, Amanda taking shots on Alyssa, who stood in front of whatever makeshift goal they’d come up with—usually the garage door or the underside of the stairs, making save after save.

It was these long shootouts in front of their family’s garage that helped prepare Alyssa for the 2019 World Cup. Alyssa took over as the new USA goalkeeper replacing Hope Solo, one of the best goalies in U.S. soccer history. Alyssa noted that she is able to succeed by focusing on what she can control.

“I can’t control what other people say, what other people perceive,” Alyssa noted to Team USA. “I know what I am. I know what I bring to the team. I know I’m confident in the player that I am. The only thing I can control is showing up to every practice, every game, trying to be at my best at any given point. I stay focused on me. I can only control me, and I am trying to be the best version of myself every single day. I compare myself to who I was yesterday and try to be better each day. So, I don’t compare myself to anything else. I try to be Alyssa and that’s all I can control. That’s who I am.”

When she is not lining up for the USWNT, Alyssa plays in the NWSL for the Chicago Red Stars. Alyssa was named the 2014 Goalkeeper of the Year. 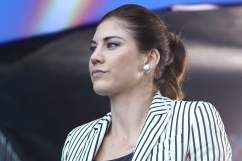