Thousands of Chicago Bears fans flocked to Bourbonnaise today for the Bears’ final public practice. After getting wowed by a series of excellent catches by Adam Shaheen and Anthony Miller, the nearly 9,200 fans in attendance got quite the scare when a fan favorite went down with an apparent injury.

While tangling in a one-on-one drill with Kyle Fuller, Anthony Miller hit the ground and stayed there. Both Matt Nagy and wide receivers coach Mike Furrey went to check on Miller, who walked off the field under his own power with trainers. Miller seemed to be favoring his lower right leg and foot area.

Anthony Miller just went down in 1 on 1s…. pic.twitter.com/fCm46tdTQ4

More drama ensued after Miller tweeted “I’m good” followed by a thumbs-up emoji–and then deleted the tweet shortly after, sending Twitter into a bit of a frenzy:

Anthony Miller has since deleted the Tweet in which he said l: I’m good ??

Miller missed one game last year due to a nasty left shoulder injury, and he had offseason surgery to repair it. He was also missed his 2014 season at Memphis due to a right shoulder injury, so it’s clear he has had issues with his shoulders. Additionally, Miller missed out on combine drills due to a fracture in his right foot–which is the same area he seemed to be favoring at today’s practice.

He has had some excellent catches in training camp this preseason, indicating his shoulder was doing just fine, and many Bears fans are anticipating a breakout year for the second year wide receiver. Miller has great expectations for his sophomore campaign, as well. 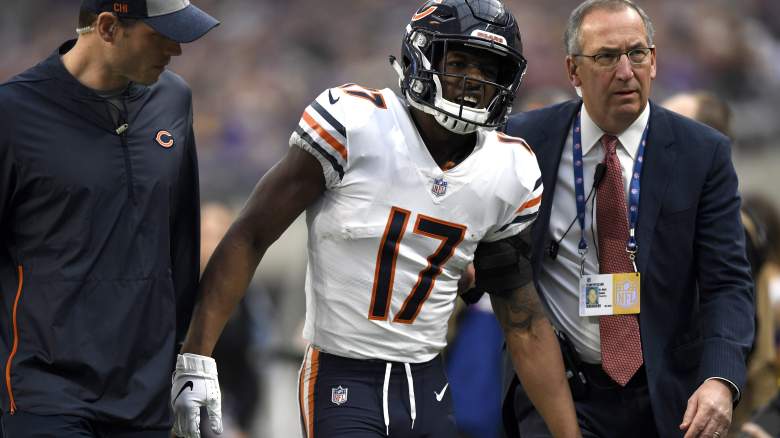 For those worried Miller may be injury-prone, consider this: while he has suffered multiple injuries in the past, he has shown immense fortitude and grit while playing through them–both in college and in his rookie season with the Bears. Miller played in 15 out of 16 games for the Bears last year, and led the Bears’ wide receiving corps in touchdowns with seven. Their group of wide receivers is certainly a deep well talent-wise, but losing the talented Miller would certainly be a setback.

Matt Nagy said after practice that he had no update to give on Miller’s injury, other than noting that it was a right foot issue, and that he thought Miller may have rolled it. Nagy didn’t seem to be too worried about the severity of the injury, however, as 670 The Score’s Chris Emma notes:

Matt Nagy didn’t have an update on Anthony Miller’s status but wasn’t initially concerned: “He’ll be alright. I hope so, at least.”

Bears fans certainly hope so too. An injury to one of the Bears’ most up and coming young offensive talents would be a major blow for the team and a fan base who are thinking Super Bowl for the first time in over a decade. Interestingly enough, Nagy also noted that he hoped Miller’s toughness remained a prominent feature going forward:

Matt Nagy didn’t have much of an update on Anthony Miller, who left practice today. Said he hopes he’ll be OK and “we’ll see how tough he is.”

Miller has displayed a great deal of toughness in the past, and the Bears and their fans can only hope to see that continue.

READ NEXT: Tanner Gentry Among Five Chicago Bears on the Bubble