It’s only a matter of time..

“QB1: Beyond the Lights” star Lance LeGendre was on of the top quarterbacks in the country coming out of Warren Easton High School. LeGendre was a four-star recruit and the No. 9 ranked dual-threat quarterback, Lance Legendre, per 247 Sports.

LeGendre received offers from a number of schools including Florida State, Miami, Alabama, Tennessee and Texas A&M. He was originally committed to Kansas but re-opened his recruitment as he received additional offers. 247 Sports detailed LeGendre’s statement on de-committing from the Jayhawks.

First off, I want to thank the University of Kansas [for] recruiting me, recognizing my talents and giving me an opportunity to play at the next level. This process is unsteady so [t]herefore I would like to [decommit]. This decision is not easy but I have to do what’s best for me.

Once LeGendre reopened his recruitment, Florida State quickly became the favorite to land the quarterback. LeGendre shocked the college football world by selecting Maryland over Florida State on National Signing Day as he followed former Alabama offensive coordinator Michael Locksley to become one of his new building blocks.

Locksley originally recruited LeGendre to go to Alabama but was able to lure him to join the Terrapins to compete at quarterback. With Virginia Tech transfer Josh Jackson later signing with Maryland, LeGendre is unlikely to start his freshman season. So far, it seems Jackson is competing with Tyrrell Pigome for the starting gig.

“Locksley says Josh Jackson and Tyrrell Pigrome have created some separation in the QB battle, but he was also impressed by Lance LeGendre in Saturday’s scrimmage and Tyler DeSue at today’s practice,” Testudo Times tweeted.

Locksley has been complimentary of LeGendre even though the freshman is unlikely to win the starting job.

“I thought he showed good poise for a young quarterback and made some plays,” Locksley said, per reporter Lila Bromberg. “He’s a guy that has the ability to make plays with his arm and his feet, and it was very evident.”

It is safe to say that Maryland would have had a slim chance of landing LeGendre without Locksley as head coach. LeGendre noted that they built a relationship since Locksley was coaching at Alabama. Maryland offensive coordinator Scottie Montgomery also played a key role in LeGendre’s commitment. LeGendre described Montgomery as a “father-figure.”

“Coach Locks actually offered me at the University of Alabama,” LeGendre explained to WGNO ABC. “He saw something in me before so when he got to the University of Maryland he also showed interest in me. It’s like a down the line thing. He’s been there. He’s been showing interest and I think I can do the job for him…Coach Montgomery feels like a father-figure to me. He displayed what he was going to do to me and with me when I get there and I just feel like that’s the best thing ever. That’s real. Coach me, coach. I want to be coached. I want him to bring the full potential out of me so I can flourish.” 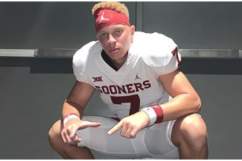