Getty Should you start or sit Chicago Bears RB David Montgomery if he's on your fantasy team?

The Chicago Bears have had a very slow start offensively so far in 2019. Their rookie running back David Montgomery is also a bit slow out of the gates as a result. Many fantasy owners have grown impatient with the lack of fantasy points put up by the Bears rookie running back in the first three games of the season.

One of the primary criticisms the team has received thus far this season is their inability to effectively run the football. Bears head coach Matt Nagy has admitted as much, and he has also been absolutely skewered on Twitter because of the head-scratching ways he has (or in many cases hasn’t) used Montgomery so far this season.

David Montgomery is your starting running back.

-not Patterson, not Cohen #Bears

Why does Nagy hate David Montgomery?

David Montgomery once Nagy gives him the ball pic.twitter.com/ymGSQkLUoQ

Take the Bears last game against Washington. Chicago had a comfortable lead the entire game, yet Nagy chose not to lean heavily on Montgomery until later in the fourth quarter. Much of this, however, will likely change soon. So what does it all mean for Bears running back David Montgomery’s fantasy outlook moving forward? 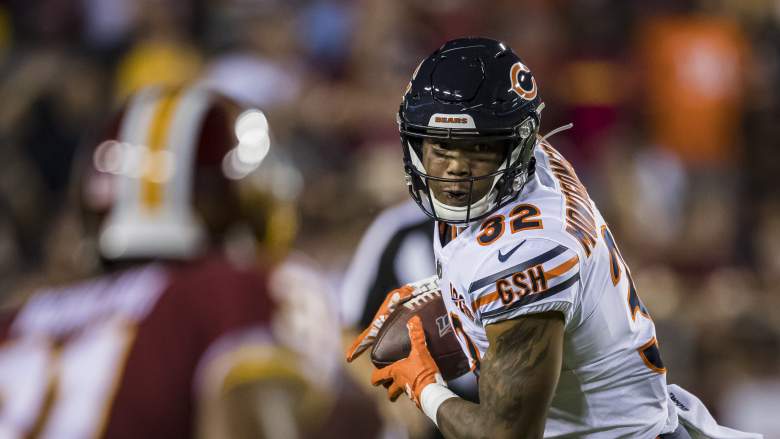 GettyLANDOVER, MD – SEPTEMBER 23: David Montgomery #32 of the Chicago Bears runs after a catch against the Washington Redskins during the first half at FedExField on September 23, 2019 in Landover, Maryland. (Photo by Scott Taetsch/Getty Images)

Montgomery carried the ball 13 times against Washington for a total of 67 yards and an average of 5.2 yards per carry. He had 71 total yards on 16 touches, and his touches should go up against Minnesota.

The Vikings have the 8th best defense against the run so far this season, and this game has all the makings of a low scoring defensive struggle. If the Bears get the ball anywhere near the 10-yard line, though, look for Montgomery to get at least one chance to get into the end zone. He will be the team’s feature back against Minnesota.

He has been underused so far, but even in limited action, it’s obvious Montgomery is extremely difficult to bring down. Look for Nagy to try to wear the Vikings defense down with Montgomery breaking off runs like this:

The David Montgomery usage is disgusting.

GET THIS MAN THE BALL pic.twitter.com/8SacdJAlkp

Should You Start or Sit David Montgomery in Week 4 Against the Vikings? 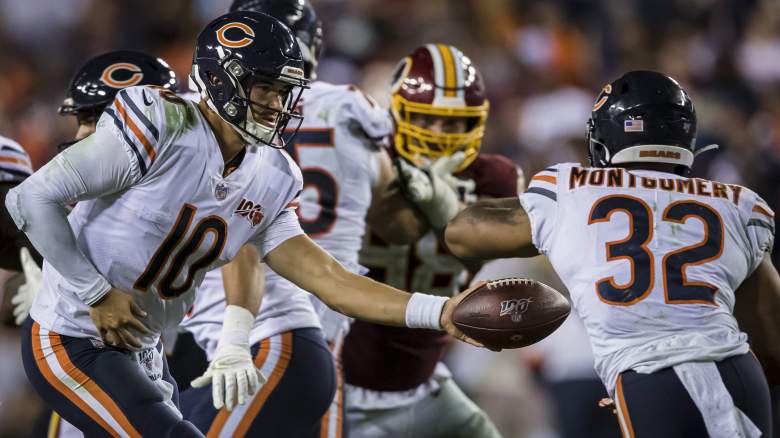 GettyLANDOVER, MD – SEPTEMBER 23: Mitchell Trubisky #10 hands the ball off to David Montgomery #32 against the Washington Redskins during the second half at FedExField on September 23, 2019 in Landover, Maryland. (Photo by Scott Taetsch/Getty Images)

FantasyPros has Montgomery projected to score 9.8 fantasy points against Minnesota week 4, and that feels a little low. This is a home game for the Bears, and it’s a crucial one. Montgomery will likely get more involved in the short passing game against Minnesota, and he should be a big part of the Bears’ offensive attack.

Look for the offensive line, which has played spotty this season, to rise to the occasion, and look for Montgomery to do so, as well. Montgomery should have over 20 touches, with around 110-120 total yards and a touchdown–or two.

FINAL VERDICT: START HIM. Yes, the Vikings defense is tough, and yes, they could bottle him up at some point. But Montgomery is also tough, and he’ll have his breakout game against this stout defense.

READ NEXT: Tarik Cohen Fantasy Outlook: Should You Drop or Keep Bears RB?

Read More
Chicago Bears, Fantasy Football, Football, NFL
Chicago Bears rookie RB David Montgomery has had a slow start to the fantasy football season. Should you start or sit him week 4 against the Minnesota Vikings?