Getty Georgia is a heavy favorite over Notre Dame in this week's marquee college football matchup.

The No. 3 Georgia Bulldogs are sizable favorites over the No. 7 Notre Dame Fighting Irish in a rare primetime matchup. Georgia is a 14.5 point favorite over Notre Dame in the latest spread and the total is set at 57.5 points, per OddsShark.

Georgia is 2-1 against the spread this season, while Notre Dame is 1-1. The Irish have a difficult task going on the road against a Bulldogs team that is one of the best in the country. This is a large spread for two highly ranked teams squaring off. Notre Dame head coach Brian Kelly noted that Jake Fromm’s ability to make plays while eliminating mistakes causes Georgia to be a difficult team to beat.

“Certainly coming in as a freshman [two years ago], he was tentative at times,” Kelly said, per 247 Sports. “He’s not tentative at all. He is going to fit it into tight windows. He is going to be smart with the football. He doesn’t turn it over. I think his completion percentage is at 75 percent.”

These two teams squared off in 2017 and some are pointing to Georgia’s one-point victory as a reason this year’s contest could be close. The Bulldogs were ranked No. 15, while the Irish sneaked inside the rankings at No. 24 heading into the matchup. Fromm made his first career start filling in for an injured Jacob Eason who would later transfer to Washington.

This was a much different Georgia team as it was early in the Kirby Smart era. The current Bulldogs are closer to Alabama and Clemson than the remaining field of teams. We are likely to see a more aggressive Georgia offense than we did in 2017 now that Fromm is a veteran quarterback.

For me, it is hard to find a scenario where Notre Dame wins this game. Georgia holds a decisive advantage in most areas when comparing the two teams. The Bulldogs have a much more potent offense with Fromm making plays when necessary and leaning on stud running back D’Andre Swift with Zamir White likely to see carries as well. Fromm also has a bevy of young receivers to choose from.

Ian Book has proved to be solid under center, but the Irish offense faces a difficult test against the Bulldogs defense. We saw the Notre Dame offense struggle against Louisville, but the Irish are coming off a 66-point performance against New Mexico.

That said, Georgia is in an entirely different stratosphere than the team Notre Dame faced last week. All signs point to the Irish offense struggling to move the ball against the Bulldogs.

If we can agree the logical path to victory favors Georgia, the big question is whether the Bulldogs can cover the two-touchdown spread. Look for Georgia to be aggressive in the rematch allowing them to utilize their speed advantage over Notre Dame during a rare night game in Athens.

The OddsShark computer projects Georgia to cover the spread with a 43.3-29.4 victory. ESPN’s Bill Connelly’s SP+ projections like Georgia to just miss covering the spread with a 36-23 win. Overall, expect an elite performance from Georgia’s offense, but Notre Dame likely struggles to score making the under the play in Vegas. 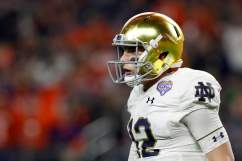