Getty O.J. Howard would be a great fit for the Seattle Seahawks.

The Seattle Seahawks are in the trade market to acquire a tight end, per NFL Network’s Ian Rapoport. Seattle is currently using some of their backup defensive ends to provide depth at the position after losing Will Dissly for the season.

“Note on the trade deadline: The #Seahawks figure to be in the TE market with Will Dissly going down, and here’s how badly they need one: They used some of their back-end DEs (including 6-4, 295-pound Branden Jackson) as blocking TEs in practice and could do so in the game today,” Rapoport tweeted.

One name that makes sense for the Seahawks to target is O.J. Howard, but it is unclear if the Bucs will move their tight end at the deadline. Sports Illustrated’s Albert Breer reported that the Patriots contacted the Buccaneers about acquiring Howard but were turned down.

The reality is Howard has been a non-factor in Bruce Arians’ new offense and is going to be a highly sought after player as the deadline approaches. Bleacher Report’s Matt Miller reported that a potential Howard trade is being mentioned as part of the “hottest rumor” among NFL scouts.

Why an O.J. Howard Deal Is Different Than the Jimmy Graham Trade for Seahawks

Seahawks fans may be having flashbacks to trading for Jimmy Graham in a deal involving center Max Unger and a first-round pick. The deal intensified the Seahawks’ offensive line problems, and Graham never looked like the player we saw in New Orleans with Drew Brees. Trading for Howard would be a much different situation.

Howard is in just his third NFL season after being selected by Tampa Bay in the first round of the 2017 NFL draft. The tight end is just entering his prime and his lack of production with the Bucs is more of a product of the scheme than talent. Howard had 565 receiving yards and five touchdowns in 10 games during the 2018 season. Seahawks Draft Blog’s Rob Stanton broke down a potential Howard trade noting the Seahawks were high on the tight end in 2017.

Before the 2017 draft, Davis Hsu noted that the Seahawks were high on O.J. Howard. The feeling was they viewed him as one of the very best players in the class. In the days leading up to the draft, he was being touted as a likely top-10 pick — perhaps even a top-five pick. It was a surprise he fell to #19.

It is unclear what the Bucs would be willing to trade Howard for, but if the Seahawks could acquire a top young tight end for a second-round pick it would be a no-brainer. It may seem outlandish to think the Seahawks could trade for another offensive player given their defensive struggles. Russell Wilson appears to be the key to the Seahawks’ success this season, and the franchise does not want to waste the MVP season their quarterback is having.

Kyle Rudolph Is Among the Other Potential Tight End Trade Options

Could O.J. Howard be on the move? ? Potential trade involving the Bucs TE is one of the "hottest rumor[s]" among scouts, per @nfldraftscout pic.twitter.com/89Pdijhm2Y

NFL reporter Rob Rang outlined a few additional tight ends the Seahawks may be interested in acquiring. Howard was listed among the potential options, but the other tight ends do not do much to move the needle.

Howard is the one name on the list that would be a difference-maker while the remaining players offer little more of an upgrade than the available free agent tight ends. It will be interesting to see if the Bucs are willing to trade Howard by the October 29th trade deadline. 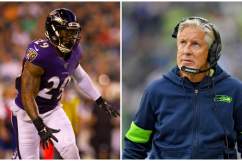