There’s a long list of teams that would be open to making a trade with the Miami Heat, who would like to add another star player or, at least, some depth to a roster built around wing Jimmy Butler. Rookie Tyler Herro is making that nearly impossible, however.

Going back to his impressive performance in summer league, when he averaged 19.5 points in six games, Herro has demonstrated that the Heat struck gold when they landed the sharpshooter from Kentucky with the No. 13 pick in the draft.

That hasn’t changed much here in the NBA’s preseason. On Monday in a blowout win against Atlanta, he scored 14 straight points to open the game for the Heat, finishing 9-for-14 from the field (5-for-7 on 3s) for 23 points. The Herro shot chart was impressive: 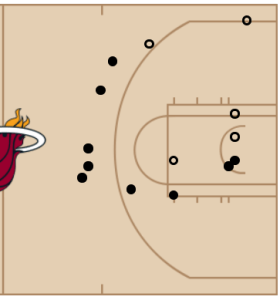 The Heat have been reluctant to include Herro in any trade dating back to the summer, when they would not put him into proposed packages to Oklahoma City for Russell Westbrook, who was shipped to Houston instead. It’s been the same with potential trades for Chris Paul, who was traded to the Thunder in the Westbrook deal.

“They’ve been firm on him and (Bam) Adebayo being untouchable,” one GM told Heavy.com before Herro’s explosive night. “Maybe they would move off of that as the season goes on, but as it stands, they think they’ve got the second coming of Klay Thompson offensively. They have not had a lot of useful guys on rookie contracts in past years and that’s killed their cap. They’ve got two now, they don’t want to let them go.”

That would gum up any potential deal for Washington’s Bradley Beal, also a target of the Heat. The Wizards are still not giving indications that they’re ready to push for a Beal deal yet but it’s no secret that the Heat would like to be in the mix if/when that happens.

But unless Herro, who is only 19, is in the return package to Washington, the Heat probably can’t compete with other offers because they’re strapped when it comes to draft picks. Miami already owes its 2021 first-rounder to either Houston or OKC and its 2023 first-rounder to the Thunder (pick is lottery-protected until 2026).

Because teams can’t trade away first-rounders in consecutive years, the Heat can’t trade a first-round pick until 2025. They’ve also dealt away their second-round picks for the next seven seasons, which is as far out as picks can be traded. The Heat have a second-rounder coming in 2022, from Denver or Philadelphia, whichever is worse.

The package of picks the Heat could offer in a deal, then, would be that 2022 second-rounder and a first-rounder in either 2025 or 2026, contingent on what happens with the 2023 pick owed to OKC.

That’s not an enticing package at all for a rebuilding team. If the Heat wants a player like Beal, it will cost them Herro.

Where Will the Heat Play Herro?

But Herro is not entirely NBA-ready. There is the defense and, coming out of Kentucky, that was the scouting-report knock on Herro.

That hasn’t changed in Miami and Herro remains an untouchable after the early stages of the NBA season melt away, it will be because the team has gotten comfortable with his defensive improvement.

“We’re just trying to prepare him as much as we can to be ready to help us win,” coach Erik Spoelstra told reporters. “Whatever role that may be. He still has a long way to go defensively, he knows that, and he’s working it. As many hours as he’s putting in on his shooting, which is notable, we’re making him put equal that, double that, defensively in film study, everything to try to fast-track him for this league. He’s eating it all up. You can’t give him enough.”

It’s still undetermined what Herro’s role will be. He is a natural shooting guard, but so is Butler and so is the Heat’s top bench option (when healthy), Dion Waiters. Butler could move to small forward and Justise Winslow, the slated starter at the position, could move to the bench—where he could also back up Goran Dragic at point guard—but Winslow is an excellent defender who has developed a decent 3-point shot.

Herro would make a very good sixth man but Miami is lacking in scoring punch and could use the spacing his shooting would provide.

These will be issues for Spoelstra to sort out. And it’s not a bad problem to have, too many good options in the backcourt and a 19-year-old lights-out shooter who just might have made himself untouchable this season.