The Chicago Bears suffered a major blow late in the first quarter of their game against the Detroit Lions. The team’s star linebacker, Danny Trevathan, went down to the ground while tackling Lions quarterback Jeff Driskel, and the way he landed was both disturbing and gruesome.

During the attempted tackle, you can see Trevathan’s arm come down awkwardly and then get caught under Driskel’s leg somewhat. The result of the scene was a very scary injury and high level of concern.

WARNING: The following content is both GRAPHIC and difficult to watch.

Because the last thing the Bears need is Danny Trevathan to be lost long-term to this injury…#Bears100 #NFL100
pic.twitter.com/c12gcTjCsZ

News is not going to be good for #DannyTrevathan @ChicagoBears. Posting shortly.

Warning: GRAPHIC#DannyTrevathan out for game and see why @ChicagoBears season in jeopardy at https://t.co/dFDT8os6QG. pic.twitter.com/dDPChn5S50

Trevathan went into the blue medical tent before heading to the locker room. He left the game and did not return. He was ruled as questionable to return in the second quarter, but watching the video of the play on which he was injured showed virtually no indication he’d be back after that. With defensive tackle Akiem Hicks, it was the second significant injury this Bears team has suffered this season.

Trevathan Has Been a Core Member of Bears Defense 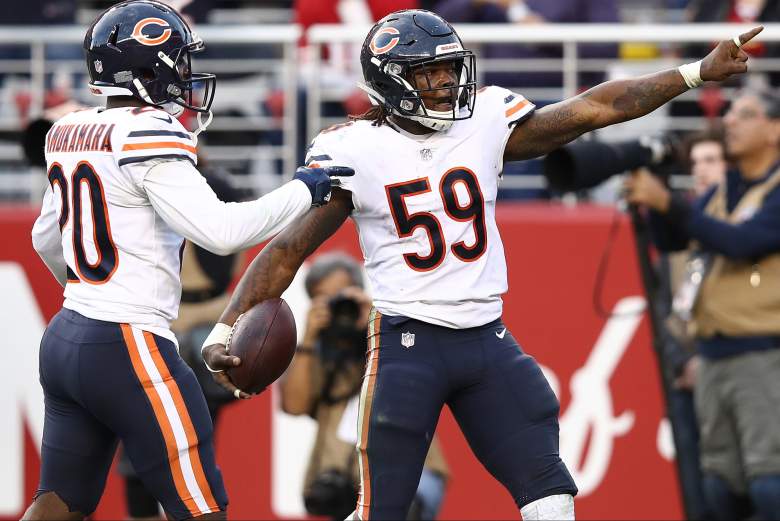 Danny Trevathan #59 of the Chicago Bears left the game against the Detroit Lions with a gruesome left arm injury. (Photo by Ezra Shaw/Getty Images)

He has been a core member of this great Bears defense, and a leader of the team. He has also been a mentor to second-year linebacker Roquan Smith. It’s difficult to imagine this Bears defense without Trevathan. However long he’s gone, he will absolutely be missed.

There has been no official diagnosis on his left arm, but so far, the outlook for Trevathan doesn’t look good. Clearly, arms are not supposed to bend that way. Sports medical analyst and “Pro Football Doc” David J. Chao gave his opinion via Twitter, and said that based on the video, there appeared to be “a grotesque left elbow dislocation with a possible fracture.”

Trevathan will turn 30 years old next March, and his contract with the Bears will be up at the end of this season. He was also playing some of the best football of his career this year, and together with Hicks, was part of the heart of this team.

Man, if Danny Trevathan is seriously hurt, you're taking the *other* heart and soul of the defense away after losing Akiem Hicks.

Trevathan is in a contract year, too, and was playing his best football in 2019. Brutal, brutal, brutal.

The Bears were lucky in 2018 because they managed to avoid getting bitten by the injury bug for the most part. In 2019, they haven’t been so lucky. It has bitten them. Hard. This injury to Trevathan was just the latest setback blow to the roster and one which will be tough to replace down the homestretch of the NFL season.